The future is bright for Star Wars fans, which for years held fast the dream of one day seeing new films on the big screen. With the acquisition of Lucasfilm, not only have we received the promise of additional movies, but there’s the possibility of spin-off franchises.

There’s a long list of characters worthy of their own series of flicks, but perhaps none warrant a spin-off as much as our favorite Mandalorian — Boba Fett.

However, what would make for a worthwhile story? Taking a look at G-level cannon, materials from the Expanded Universe and a pinch of wishful thinking – here are four possible story ideas for a Boba Fett feature film. [Additional posts coming soon.]

It took every ounce of training and experience he’d garnered over decades of battles to escape the belly of the Sarlacc. The digestive acids of the beast had done its damage, destroying not only his father’s armor, but the genetic copy of his father’s face – virtually destroying everything left of Boba Fett’s template – Jango Fett. The bounty hunter is found at the brink of death and recovering near a scrap yard by sometime-ally, sometime-foe, Dengar, who must be convinced of Boba’s identity. According to Dengar, he ran into Boba just a week or two prior while hunting down a target. Boba learns that while he was trapped in the belly of the Sarlacc, an imposter has been taking jobs under his name and wearing Mandalorian armor. When Dengar describes the markings on the armor, Boba concludes it’s the backup set stored away on his ship – now missing, which is the reason he’s been stranded on Tatooine. The imposter is a man named Jodo Kast, a half-rate bounty hunter who took advantage of the situation following Return of the Jedi. Robbed of everything that Boba’s felt separated him from just being another clone, he calculates revenge. His mangled face and body allows him to easily move about, putting pieces of the puzzle in place, all leading to a very public return and retribution against Jodo Kast – making him a public example of crossing the Mandalorian. 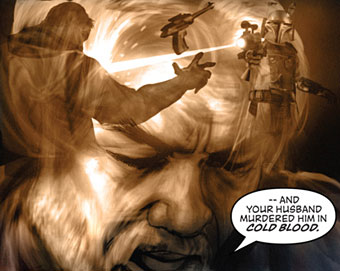 The majority of Boba Fett’s youth was seeking revenge for the death of his father at the hands of Mace Windu. In general, Fett held distaste for the entire Jedi Order, and their “pet” clones that reminded young Boba of the father he’d never see again. After Order 66, the Jedi disappeared and pushed into extinction, the young bounty hunter found himself needing to put away the baggage he’s carried for years. Wanting to learn more about his father, Boba Fett travels to Mandalore where he becomes a Journeyman Protector, and also begins to fall for a young Mandalorian woman, Sintas Vel. The only thing that grows faster than their romance is Boba’s reputation as a fighter and leader. With the Jedi gone, the Empire has moved their sights on Mandalorians, who now pose the biggest threat to the Emperor – being they refuse to be ruled and are proven warriors. Things are looking up, until Boba learns that his commanding officer, Lenovar, had assaulted Sintas Vel while Boba Fett was away fighting a battle against a fleet of Imperial ships. When Boba Fett finds out, he kills Lenovar, but is exiled and barley escapes with his life due to the political weight of Lenovar’s father, the governor of Concord Dawn. Forced to leave his father’s home world and the woman he loved, Boba Fett returns to his former life of bounty hunting. Boba’s reputation was not lost on the ears of Imperial intelligence officers. When the Emperor learns of Boba Fett’s exile, he assigns Darth Vader to bring in the Mandalorian and we see the beginning of what becomes a long relationship between Boba Fett and Darth Vader. Boba is contracted to decapitate the upper command of the Mandalorian Protectors.