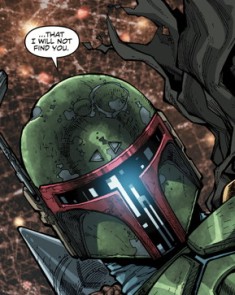 If you’ve followed my reviews of “Star Wars: In the Shadow of Yavin,” then you’re well familiar with my feelings on the overuse of story tropes we’ve seen in Star Wars comics for decades. One of the most common of these tropes is with subplots between Han Solo and Boba Fett.

Earlier this year, when Entertainment Weekly ran a sneak peek at “Star Wars” #2, I was excited to see Boba Fett would be introduced in this title – but, I was also wary from the fact it appeared to be the same story we’ve seen too many times – Boba Fett chases Han Solo, the smuggler escapes, Boba Fett catches up, and the smuggler once again escapes. No payoff, no consequences.

Although the subplot was dragged out, the appearance of Bossk as Boba Fett’s partner gave me hope there’d be more to the confrontation. I was very interested in seeing how the two bounty hunters hooked up, and wanted to see an altercation that would shed light into Han Solo’s reaction to the bounty hunter in Empire Strikes Back and Return of the Jedi.

I also wanted to see the relationship explained between Boba Fett and Bossk. Something had to have happened to explain why they worked together to hunt down Solo after the Battle of Yavin, but they worked apart during Empire. What was the falling out?

However, we got none of this. In “Star Wars” #10, we receive a gripping illustration of Boba Fett clinging to the Millennium Falcon in a last ditch effort to claim his prize. The Falcon crew loses their “extra cargo” upon leaving the planet’s atmosphere. 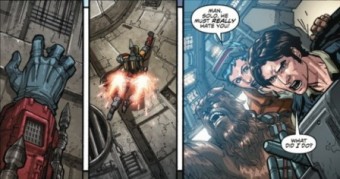 In one of the last panels of the confrontation, Perla says, “You two can continue this another time,” which is almost funny if the trope wasn’t so tired. Is this a nod from writer Brian Wood that he understands how many times we’ve seen this same story unfold?

While I love seeing Boba Fett in comics, when nothing new or original is shown through the story, I feel it just makes the story flat and one dimensional.

What did you think of the way Han Solo and Boba Fett’s confrontation played out? Were you satisfied with the subplot or disappointed?