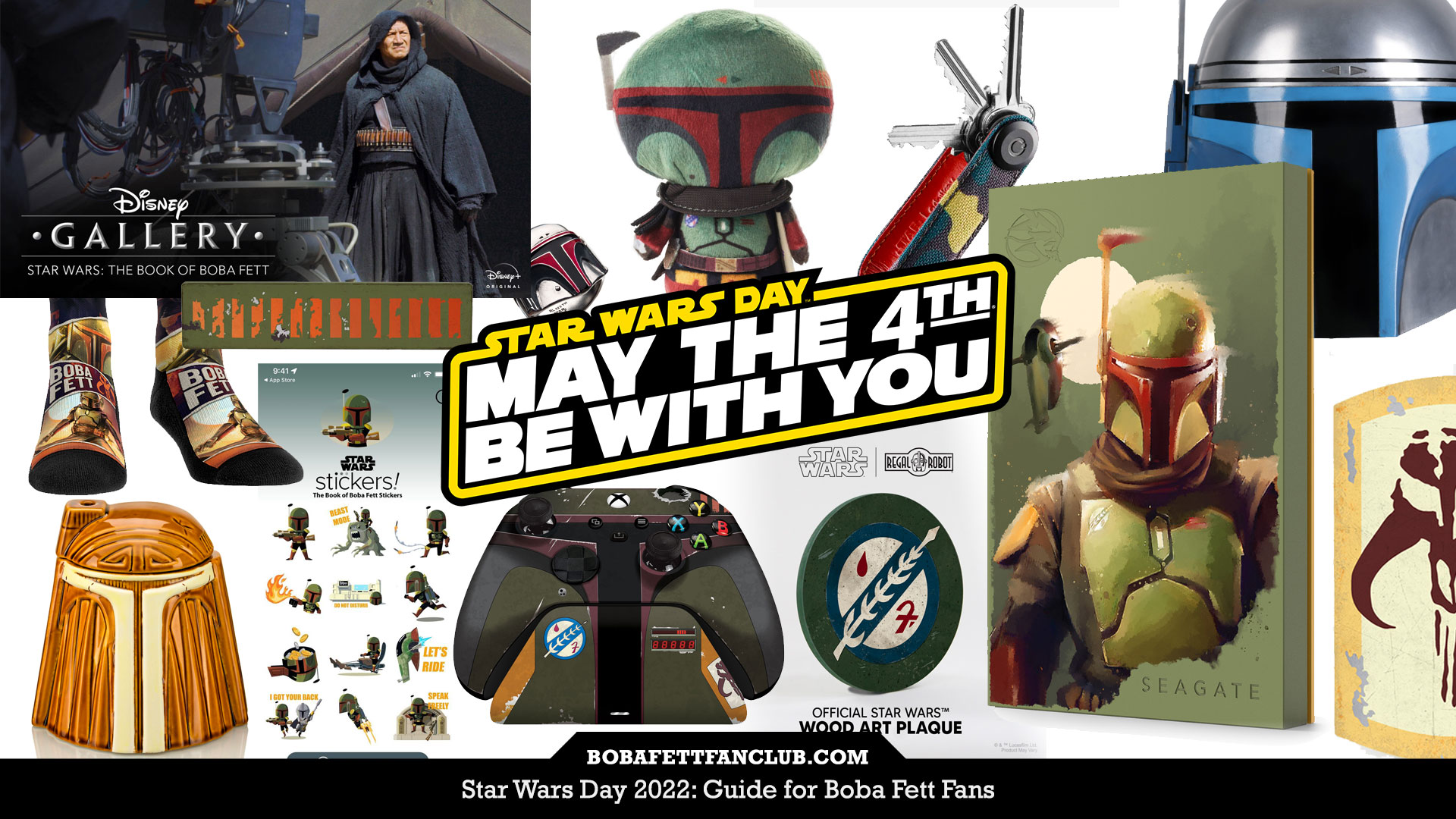 The 4th of May is considered “Star Wars Day,” like “May The Fourth Be With You,” and it often involves product reveals and sales from official licenses. BFFC has the lowdown on all of the ones that are just right for Boba Fett fans. Enjoy!

The data storage company has a line of external hard drives, one of which features Boba Fett, available as of May 4th on their site. 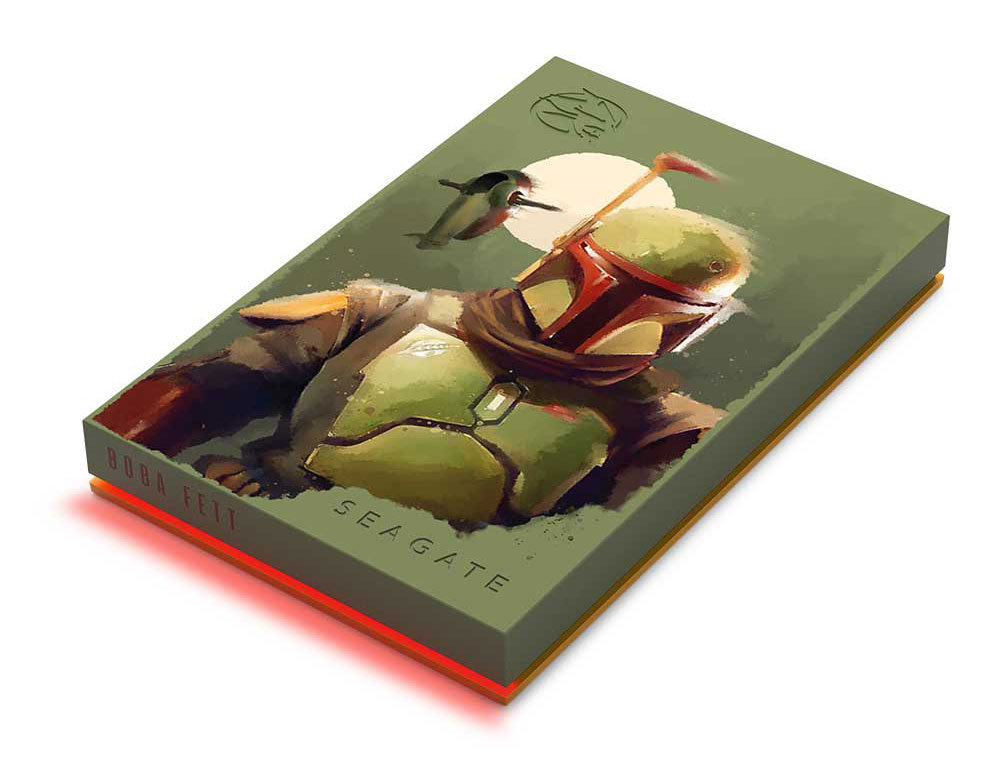 We’ve teamed up with the makers of Cable Guys to do a giveaway for a chance to win their new “The Book of Boba Fett” Boba Fett Cable Guys controller/phone holder. See our contest page for the details and how to enter. Starts on May 4th (Pacific) and ends May 8th at 11:59pm Pacific. 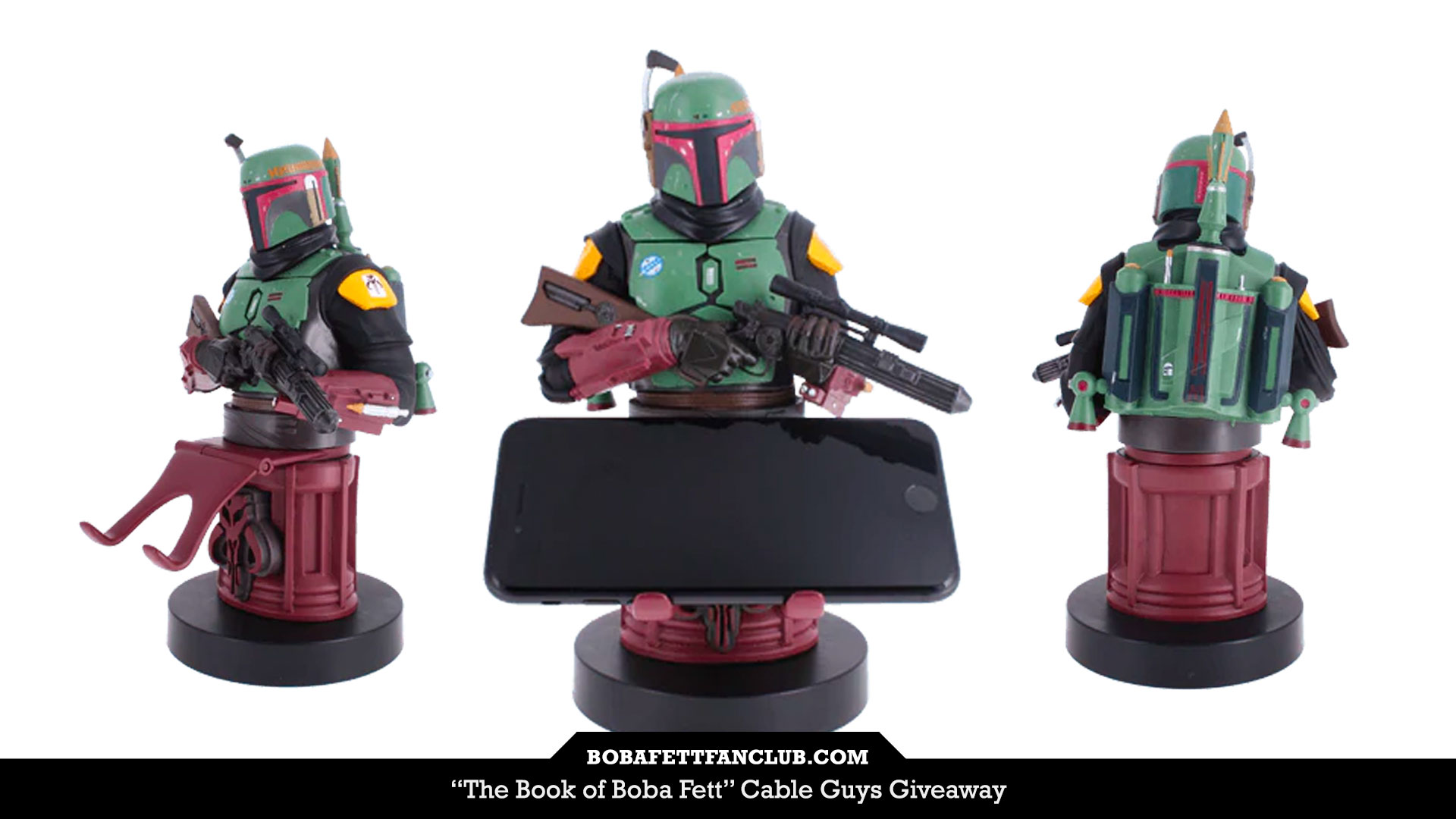 The company has a Boba Fett inspired key organizer, available as of May 4th on their site. “The contemporary camo nylon band and maroon leather lining pays homage to Boba Fett’s iconic helmet and chest plate, while gunmetal hardware is reminiscent of his dangerous armaments,” notes their press release.

We got a first-hand look at it — read our review. 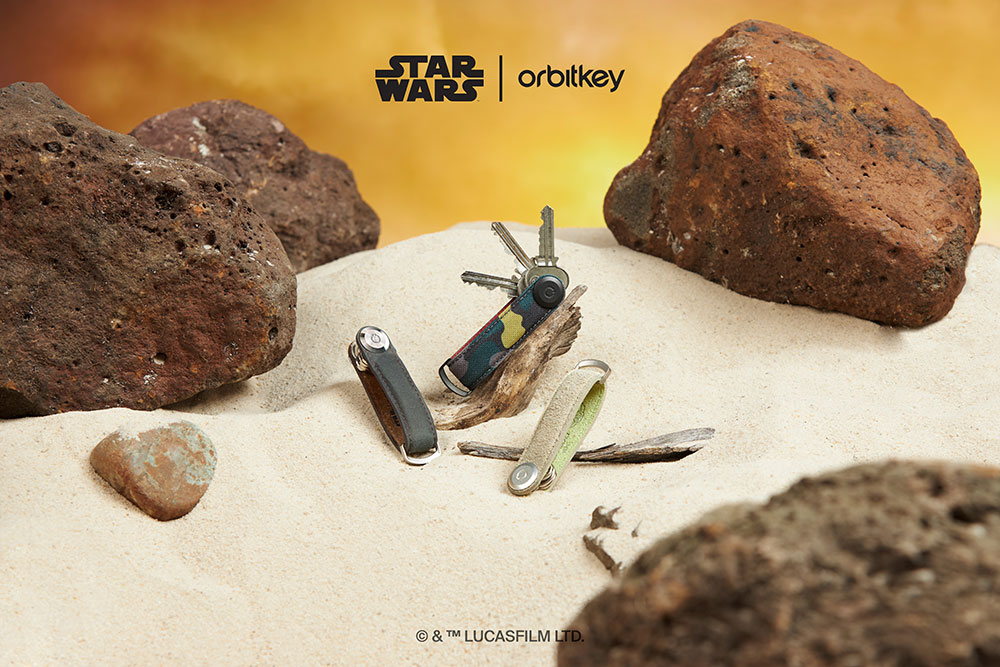 Beginning at noon in London on May 4th, the first part of the Jeremy Bulloch Estate Auction begins via East Bristol Auctions. See our earlier article on the 610 lot collection.

The newly released “The Book of Boba Fett” sticker app in the Apple Store for $0.99 was designed by Brian Kesinger.

The art/furniture/décor company with Mythosaur and Boba Fett items is doing 20% off select items with code MT42022 on May 4th.

The screen-accurate (and screen-used) cosplay company is doing 25% off all in-stock parts while supplies last until May 4th at 11:59pm CST. Discounted price shows up at checkout with no code needed.

They have a brand-new Boba Fett bust, available in silver ($550) and a sort of golden variant ($750), available on their website plus Sideshow Collectibles.

Revealed on May 4th with no heads up, the Diamond Select Toys Boba Fett diorama is finally up for pre-order for $49.99. The item was previously up accidentally months ago, but today it’s the real deal.

Released before May 4th, Boba Fett and Din Djarin on a shirt saying “May the 4th Be With You” is in stock.

For officially licensed high-end costumes and collectibles, Denuo Novo is a new player owned by NECA, taking over some old assets. You can get 10% off with free domestic shipping or reduced international shipping on in-stock and pre-order items, including the Jango Fett and Kylo Ren helmets.

Through the store’s Star Wars page, you can find deals specific to May 4th.

The white version of Bandai’s Star Wars R2-D2 Tamagotchi is also 20% off right now. (The blue hologram version is just 11% off.)

Bitty Boomer’s “The Book of Boba Fett” speaker is 25% off. (StarWars.com says 30% off but not seeing that currently.)

From now until May 17, the Boba Fett outfit returns to Fortnite. “Over the course of the Star Wars Day festivities, every non-Battle Pass Star Wars Outfit that’s been in the Item Shop will make an intergalactic comeback,” notes the publisher, Epic Games, on their website. 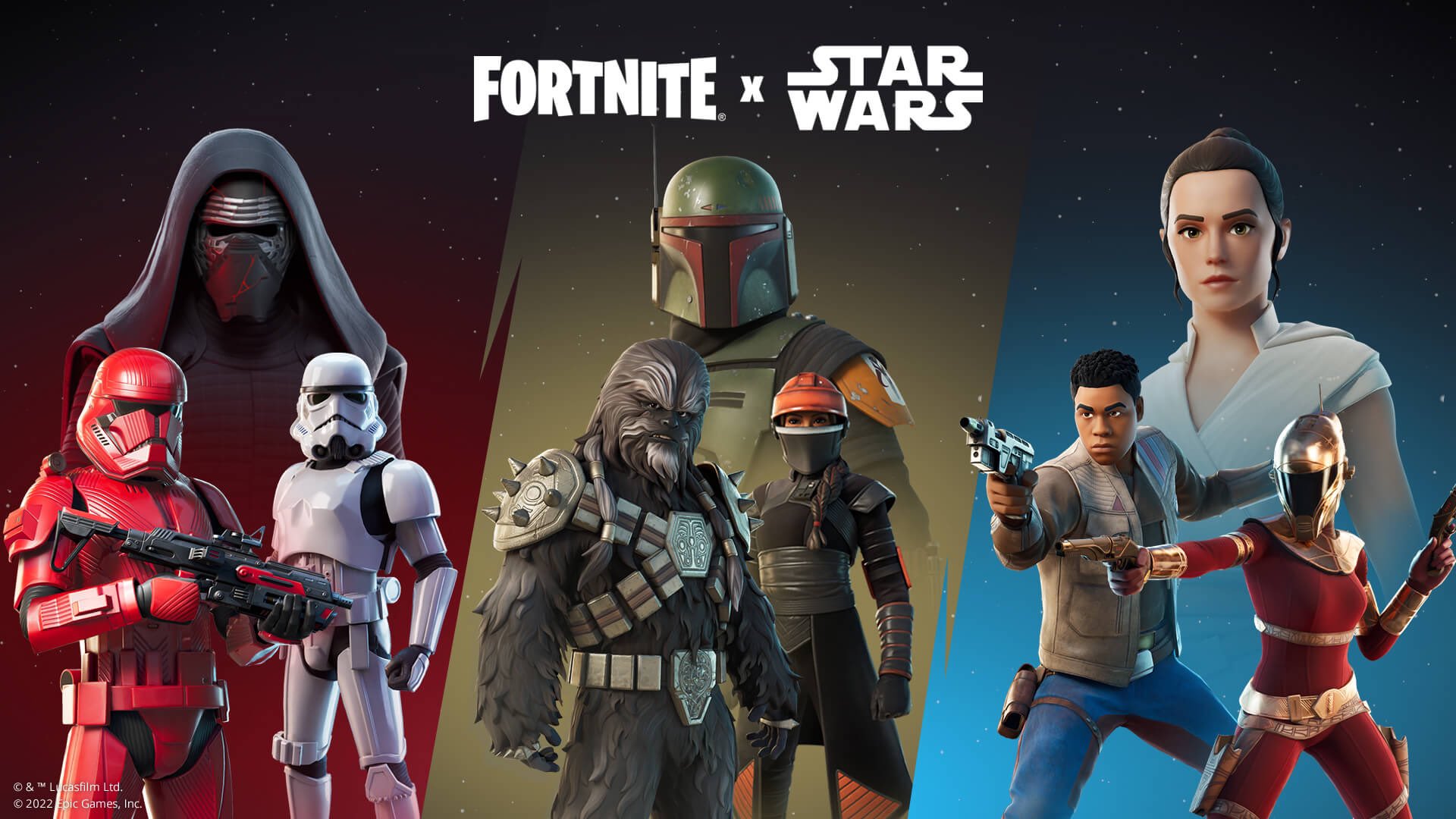 The Boba Fett bear plus others are up to 30% off for their Star Wars Day sale.

There’s a new “May 4th” Boba Fett t-shirt from Funko, featuring his “The Book of Boba Fett” look, available to order at Entertainment Earth as of May 4th.

Exclusively at GameStop, there’s a new 18″ Boba Fett coming in September. It’s pricey, but the $110 price point is commiserate with others in this line, e.g. Batman. The concept appears to be related to the regularly sized “Bounty Hunter Collection,” which we got to shoot first looks for them.

The company also revealed their Star Wars Celebration Anaheim exclusives and they’re doing a “Retro Comic” Boba Fett in their “soda” line, where the figure is within a soda can (without the liquid, of course).

The eyewear company is doing 25% off their Star Wars collection, which includes “Boba Fett 2.0.”

New for 2022, their Boba Fett Gaming Chair was revealed May 4th on their U.K. website. Note: it appears to be omitted from their U.S. website.

For May 4 and 5, the jewelry company with its “The Book of Boba Fett” line has a 25% off sale. Two Boba Fett rings, plus a Fennec Shand and a Mandalorian symbol option.

Need stickers for your wall or car windows? Fanwraps has a 20% off sale with code FORCE 20, valid now through May 9th on select merch.

The jewelry company has a Boba Fett necklace and Boba Fett stud (in the “Empire” set). Use code FORCE for 15% off on their site.

The shop has 20% off select Star Wars merch, which includes some of their Boba Fett apparel.

Star Wars designs (which include several Boba Fett items) for children are up to 40% off on Star Wars Day. One labeled “The Mandalorian” is also clearly a Boba Fett design.

The Boba Fett bracelet is included in the 40% off May 4th sale when using code THEFORCE as checkout.

“Boba Fett Reads” and the cover of “Tales From The Empire” (with Fett armor featured) are part of their buy-one-get-one-free (BOGO) sale running May 3 – May 6.

The company has a 16% off sale on their Boba Fett Xbox controller, but a deeper discount (17% off) can be found on Amazon and GameStop, linked below.

Many Boba Fett designs available and on May 4th you can buy two get one free.

Their Boba Fett necklace and ring are part of their 30% off sale on May 4.

The official licensee has multiple high-end Boba Fett pendants and rings, 20% off on May 4.

The designer apparel site has multiple “The Book of Boba Fett” shirts and bags up for pre-order, but the collection officially drops on George Lucas’ birthday, which is May 14th.

The Eric Tan x Geeki Tiki Boba Fett dropped in 2021, but for Star Wars Day (or Day’s Eve), the company “releas[ed] another 100 Sets of our Eric Tan x Geeki Tikis on May the 4th. If you missed the prior Pre-Order, this is your opportunity to snag the Special Edition of only 500.” By 10pm Pacific May 3rd, they appear to be already sold out, or there’s a secret link for newsletter subscribers.

“The Book of Boba Fett” throne can be found in both Disney parks now for photo ops! It used to be outside the park.

Did we miss anything else? Let us know in the comments!