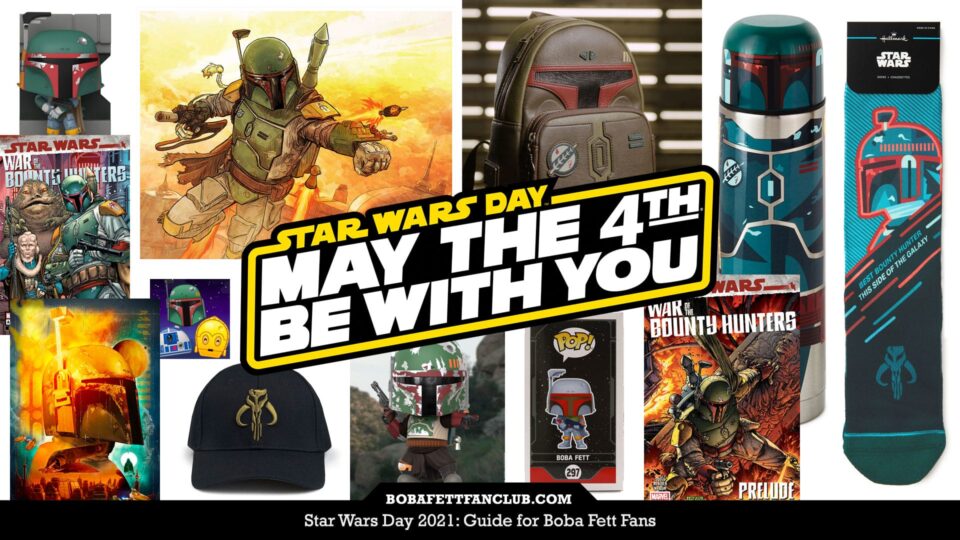 The 4th of May is considered “Star Wars Day,” like “May The Fourth Be With You,” and it often involves product reveals and sales from official licenses. BFFC has the lowdown on all of the ones that are just right for Boba Fett fans. Enjoy!

We had the honor of getting an exclusive first look at Loungefly’s new Boba Fett mini backpack, which will be up for sale on their site starting May 4 at 9am Pacific.

The video was launched on Loungefly, Funko, and Boba Fett Fan Club channels at 5pm Pacific on May 3. In just the first few hours, it got over 75,000 views across the three social channels.

They also have a new wallet and a 4-piece pin featuring Boba Fett available May 4.

In addition, they’ve released “A Practical Man” by Brent Woodside, which you can get on the Acme Archives website and Dark Ink website.

But it’s also on the artist’s website, too! Same item as Acme/Dark Ink but comes signed and with one of his personal sketch cards. He even takes requests on the sketches and, if none, it’s usually Star Wars themed.

“Join us for Star Wars Day and get a fourth off exclusive Star Wars cards and gifts. Only on May 4th, in stores and online (some exclusions apply).” See their site for more.

Hallmark also recently added Boba Fett socks and a Boba Fett water bottle to their website. They are also in some stores (call ahead).

Their sale started May 2nd and covers a lot of different items including: 1) 50% off select Star Wars video games, including Star Wars Squadrons, Star Wars Jedi: Fallen Order and Star Wars Journey to Batuu, 2) 15% off select Star Wars collectibles, 3) only $50 for the Tauntaun sleeping bag, 4) buy 1 get 1 free apparel accessories, and 5) only $10 regular priced T-shirts. Sale ends Saturday, May 8. See their site for all things.

You can also still pre-order the GameStop exclusive Funko Boba Fett. We even did a promo video for them with it:

Finally, Star Wars: War of the Bounty Hunters Alpha #1 is available May 5 where comics are sold. The issue has had 30 different pieces of art on the front, and almost double that in terms of trade dress vs. virgin variants. (We keep track of them all, of course.)

They have a whole lot of new products available even a little before May 4th, including many “Warriors of Mandalore” themed. Get 20% off for all of May 4 on on their site. Sale ends at midnight Central.

They also have Ahsoka loungewear and free shipping over $75.

The artist is doing 35% off all items and also giving away a free Star Wars print with purchase. Just use promo code STARWARSDAY on checkout on his site. Ends May 9.

Spotted a few days early, and then starting late on May 3rd, the latest Funko #297 Boba Fett variant is a vintage Kenner repaint. BAIT is handling the U.S. sales on their site. They’re doing $20 plus a flat $5 for shipping, but having customers fill out a Google Form first to get on a list. While some of the language on the page sounds like it’s a lottery style, other language contradicts the “entry” approach by saying it’s first come first served.

“The Force Awakens From Its Nap” is a new Simpsons / Star Wars short. There’s a baby Boba Fett that makes a cameo. (Thanks to Fantha Tracks for the heads up.)

The video game platform has a weekend deal to save up to 75% in the Star Wars Day Sale on their site.

Get up to 50% on select Star Wars games on PS4, Xbox One, Nintendo Switch, iOS and Android on their site.

You’ve got through May 9 to use code FORCE20 to save 20% on Star Wars products on their site. Some exclusions apply.

For just May 4, get 15% off Star Wars products in the cases and den series on their site.

Get 20% off all Star Wars products on their site, including some tanks, pajamas, and sleepers with what looks like Boba Fett on them (as opposed to a nondescript Mandalorian).

The free mobile game (with in-game purchases) has been doing a “Jabba the Hutt Villain Event” this last week running thru May 4. If you can unlock Boba Fett, you can use emojis outside of the game. There’s no clear or easy way to play the game for free to unlock Boba, though, as it takes 200 rare gems in the game to then have a 10% chance in a blind drawing to pull him. You’re lucky to get 1 or 2 gems after playing for an hour, so it’s only for those willing to pay to play to get the digital Boba graphics.

The company revealed a new Boba Fett Cosbaby. Nothing up for pre-order yet, but a few images of it in a larger series.

Starting May 1 and going through May 8, three deals:

Also, their new book Star Wars: The Skywalker Saga (which has a bunch of Boba Fett content in it) and Star Wars Insider Fiction Collection Volume 1 are also on sale starting May 4.

Tom Spina’s is doing 10% off all Star Wars decor including the Mythosaur and Mudhorn skulls, Beast Collection magnets, Han in Carbonite plaques and more on the site. Use code MT421 at checkout by 12pm Eastern on May 5.

On Amazon, you can save 29% on the Polaroid Now i-Type Camera – The Mandalorian Edition.

Fun fact: we did a “branded content” promo for that product too!

As usual, StarWars.com has a list of deals, many of which don’t involve Boba but may be still relevant for you.

Did we miss anything else? Let us know in the comments!