May the fourth be with you! Today is Star Wars Day (May 4). Like in previous years, even though Boba Fett is not in any of the past films, and only rumored to cameo in Solo: A Star Wars Story, he is in a ton of merch this year. This is our thorough guide to help you track down any bounties.

We’ll be updating this list throughout the day, so check back often.

20% off sale starts Friday, May 4th. Here are also all of the new prints, including several with Boba Fett:

Our anniversary/charity designs on TeePublic are part of an exclusive coupon code for 30% off. Use code FORCE30 by May 6th at midnight EST.

Like the Mandalorian references we’re seeing in Solo: A Star Wars Story promotions? Otterbox has a new Solo phone case with that very symbol. Save 10% on May 4th only for one of those “Symmetry” cases on their site.

Fan-favorite company Regal Robot has new Mandalorian skulls (large and small) and cafe tables featuring the Mandalorian symbol. With code MAYTHE4TH, you can get 25% off thru May 6th on Regalrobot.com.

The Mint released a Boba Fett coin earlier this year in three editions: $85, $600, and $2,500 variants. The $85 silver coin sold out fast, but the other two gold coins are still in stock. You can try using code STARWARS at checkout to get 20% off. You’ve got until May 9th, New Zealand time.

Only a BB-9E ornament is 25% off for May 4th at the Hallmark website, but there’s a new ROTJ Boba Fett ornament this year, which you can pre-order now for the normal retail price. It ships in July.

Hallmark also has premium e-cards. There are a few Boba Fett ones. Use code Maythe4th on May 4th for 20% discount on an e-card subscription.

Bluefin, who distributes Tamashii Nations in the U.S., has 25% off some Star Wars plastic model kits for May 4-6, including their Ronin Jango Fett. $67.50 instead of the normal retail price of $90.

Invicta has a handful of new Star Wars watches, several of which feature Boba Fett. For May the 4th, they’re doing 30-60% off select items. They sell their items on a site called Evine.

Get 25% off on all Hot Wheels Star Wars cars with code STARWARS, valid until May 6th on their website. The sale includes the new Battle Rollers Boba Fett with Slave I.

Their new Paper Cut Art Bag is 20% off Star Wars merch between May 4 – 6 on their website.

Foster Grant has made four pairs of Boba Fett shades over the years. For 40% off their current line of Star Wars sunglasses, use code SOLO40 between May 4 and 6 on their website.

While some select merchandise is 40% off until May 6, the Disney Store exclusive Return of the Jedi 35th Anniversary Lithograph Set is now in stock. One of the four prints features Boba Fett.

For May 4th only, you can get 40% off Star Wars products at American Tourister. Their Boba Fett luggage is pretty cool — sized either for the overhead bin or the cargo hold.

The premium brand has a very classy Boba Fett pen. Use checkout code MAYSTAR18 on Cross Townsend to get 20% off their premium Star Wars pens. You’ve got from May 4 until May 25 at 11:59 PM EST.

The store has a new, exclusive Boba Fett blazer for sale on their site. No major sales, but you can get $4 standard U.S. shipping with code 4FORMAY4 on May 4th.

This May 4th, Funko has a sale on their newer Star Wars POPs like the Funko Wobblers Boba Fett. Use code M4BU for 15% off, plus get free shipping on orders of $50 or more.

The mobile game, which includes Boba Fett as a playable character, has a promo going on. It’s free and works for iOS and Android. StarWars.com summarized it as follows: “In Star Wars: Force Arena, pre-registration opens on May 3 for the upcoming Solo: A Star Wars Story-inspired game update, with new content and characters from the soon-to-be-released film, including a young Han Solo. If 200,000 people pre-register for this special update, all players will receive a Legendary Wild Card as an in-game gift. And you can snag free 40th anniversary characters like Luke Skywalker and Darth Vader or get a discount on the full anniversary character pack.” You can find more info on starwarsforcearena.com.

Hanna Andersson has 20% off their Star Wars merchandise for May 4th. One of the pajamas has Boba Fett on it, with sizes for adults and kids.

Between May 4th and 7th, use code MAYTHE4TH on the FanWraps website. They have three window stickers featuring Fett. One of which sure looks a lot like a vector graphic we made years ago… but surely they had their own graphic designer make one themselves…

Fathead makes a ton of Boba Fett wall art and their Star Wars Day sale with 20% off items on their website. You’ve got until May 6th.

You can find more on StarWars.com, but any that you found with Boba Fett merch?

Let us know in the comments or via social media. 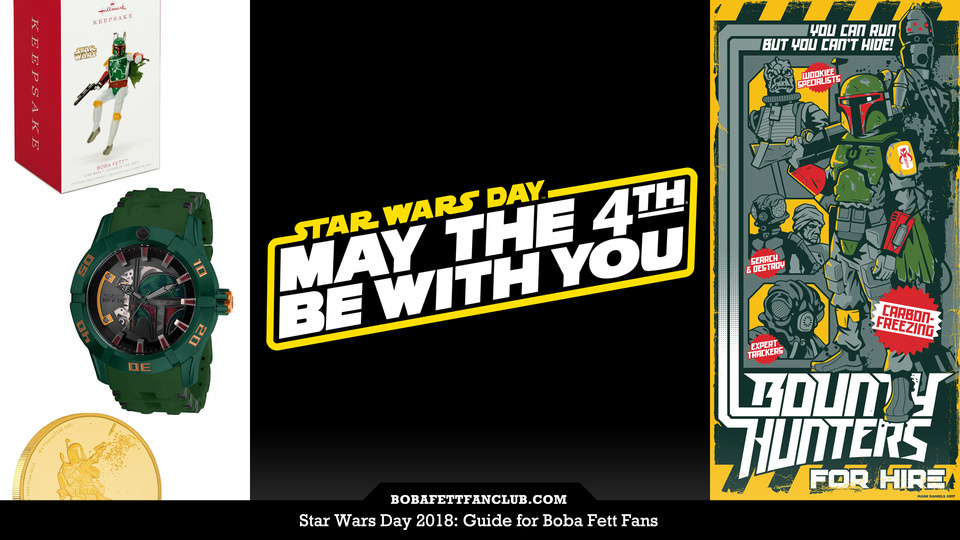