There’s been speculation whether or not the Star Wars spin-off films will be related to the series proper. If the latest plot rumors have a kernel of truth, as reported by SchmoesKnow.com, this very well may be. 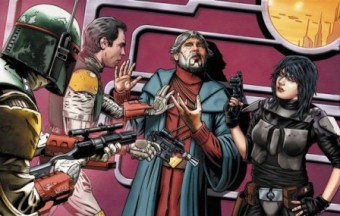 According to the “leaked” information, the plot centering on Episode VII will involve the characters of Jaina and Jacen Solo – the twin children of Han Solo and Leia Organa. The New Jedi Order has been established, but tensions rise when Jacen turns to the Dark Side.

Fans of the Expanded Universe are familiar with this story, especially from the “Legacy of the Force” novels. Jaina was trained by Luke Skywalker and her brother, Jacen, becomes one of the most powerful Jedi in the universe, rivaling Luke, himself.

In the novels, Jacen is seduced to the Dark Side as a way to better the world. He becomes convinced he can learn this side of the Force without falling into the same trappings his grandfather, Anakin, had. In the novels, it becomes left to Jaina to stop her brother – and to do so, she seeks out Boba Fett to train her.

Jaina’s time spent on Mandalore, training with Fett, becoming comrades with Mirta Gev, Boba Fett’s granddaughter, and fighting beside Mandalorians, was a pivotal piece of her readying to take down her brother. Therefore, if the plot of Episode VII is truly about the Solo twins – we’ll likely see a heavy amount of Mandalorians – even if this isn’t fleshed out until Episode VIII or IX.

I wouldn’t be shocked if Disney wants to include more Mandalorians in the sequel trilogy. The popularity of Death Watch and Mandalore-centered episodes in The Clone Wars has proven fans embrace Mandalorian factions as much as Jedi and Sith.

This also would open Boba Fett’s rumored spin-off, especially if Episode VIII is when they land Jaina on Mandalore.

They could set up the fall of Jacen in Episode VII, and then release the Boba Fett spin-off, which centers on Boba Fett’s survival from the Sarlacc, reunion with Mirta Gev and becoming Mandalore. Then we have all the information we need to lead into Episode VIII – which shows Jaina arriving on Mandalore and her experiences with the people.

What are your thoughts?