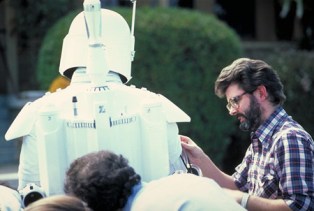 When Disney announced the development of “Star Wars Rebels,”they released a short video of Pablo Hidalgo talking with Dave Filoni about the basic concepts behind their approach to this new animated series.

Filoni said they are using concept art by Ralph McQuarrie, an artist famous for assisting the look and feel of the original Star Wars, as a foundation for the new series. Since his concept art is similar, but not exact to what we see in the original trilogy – Filoni is running with the idea those designs could be an early evolutions of armor, ships, etc. 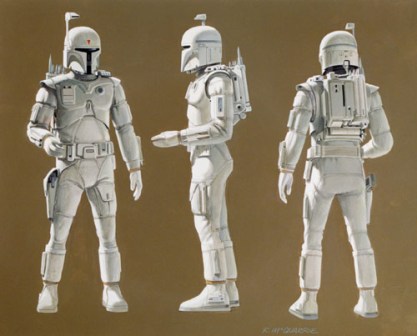 We’ve seen a variety of colors and styles worn by Mandalorians in The Clone Wars and comics. Since Boba Fett is separated from his culture during this time period, there’s no telling what his first armor may look like – leaving room to introduce the prototype armor as the bounty’s hunter first reintroduction to Mandalorian tradition.

Due to The Clone Wars being cancelled, we missed out on the story arc of how Boba Fett gets his armor. Assuming they don’t recycle that storyline, perhaps his first armor is commissioned by Boba Fett as a way to pay homage to his father – and this is the prototype version – the young Fett not knowing too much about the meaning of colors and insignia, it’s reasonable the design could be “off,” since it would be from memory.

As he gains experience and knowledge of his culture, maybe even stumbling upon a lost and forgotten armory of his father’s, he finds the armor we eventually see in the Original Trilogy.

Would you like to see the prototype armor used in ‘Rebels’? Share your thoughts at our #BringBackBoba Campaign page.