In an article posted right now at Latino Review, columist Kellvin Chavez claims to have a scoop on the rumored Boba Fett film.

Since as early as 2011, we’ve had Joe Johnston expressing interest. Johnston, who originally designed Boba Fett and is now a major film director, has shown interest in the Star Wars films. He has also recently done “sketchbook” auctions, such as one he drew showing Boba Fett on a speeder bike.

Buried in Chavez’s article touching on three other points, he touts two things that are considered new rumors, although under this source: “wouldn’t you like to know.” The typo “Bobba” doesn’t help here, so be advised.

To counter-act the prequels, the Boba Fett spin-off movie planned for 2018 has an interesting twist pitched by Episode VII writer Lawrence Kasdan: the spin-off will start with a complete stranger killing Boba Fett and taking his armor, starting a Man-With-No-Name bounty hunter tale. So: someone kills the Boba Fett from the prequels and takes his armor and name. One this is for certain is that Kasdan didn’t like the prequel and wants no Bobba Fett Clone in the spin-off film.

Sounds a lot like a Western and it sounds like it could restore a fan-favorite character that was totally a little boy with thousands of versions of his father running around. Or it could just be a lot of stupid rib-elbowing about this stranger doomed to fall into a Sarlaac pit in the most anti-climatic franchise exit ever.

Lastly I was told by 3 sources, reps etc, etc…(so call who ever you want) that Captain American director Joe Johnston is on top of the list to direct the spin-off, which makes sort of sense since he began his career as a concept artist and effects technician on the first Star Wars film. REMEMBER NOW before you all go and say he’s directing the project, I never said he has the job, just that he’s on top of the list, lets get that perfectly clear. 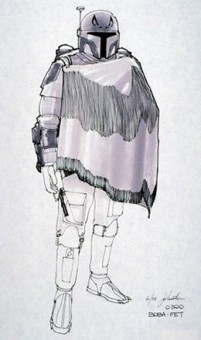 An original sketch by Joe Johnston of Boba Fett in a Western-style cape, circa 1978.

There’s a lot of rumors buried in here:

What do you think? Comment over at Latino Review or right here at the Boba Fett Fan Club.

This rumor comes on the heels of words two weeks ago from director Jon Schnepp, who guested on AMC Movie Talk, saying “for a fact” he knows Lawrence Kasdan is writing a Boba Fett spin-off film. We followed up with him multiple times for further clarification, but none of our outreach was returned. Kasdan is currently only officially confirmed to be writing Star Wars Episode 7, which may or may not include Boba Fett at all.

(Extra hat tip to PJ Campbell who gave a shout out to this and also the Schnepp news.)