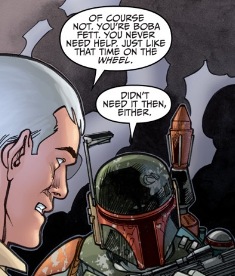 Last week the production team for “Star Wars Rebels” hashed out story ideas for season one. Fans have begun tweeting spoiler-oriented questions to producer Greg Weisman. Obviously, the team over at Disney/Lucasfilm isn’t going to share anything at this point – but we can speculate – or hypothesize.

Here is a list of four ways Boba Fett could fit into the world of “Rebels,” some of which is based on various levels of canon we’ve seen dealing with the Dark Times between Episodes III-IV.

How do you think Boba Fett could fit into ‘Rebels?” Share your theories by commenting and at the #BringBackBoba campaign page on Facebook.