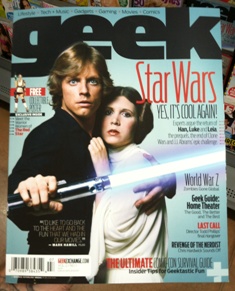 “After briefly being introduced in The Star Wars Holiday Special, bounty hunter Boba Fett made a more impressive entrance to the Star Wars mythos in The Empire Strikes Back, in which he instantly captivated the imaginations of fans everywhere. The character’s enduring popularity led to him being added into the original Star Wars in the 1997 Special Edition release and becoming a vital part of the prequels years later. So why has Boba Fett become such a fan favorite opposed to some of his brooding brethren, such as IG-88 and Bossk? We turned to our Star Wars experts to get their thoughts on Fett’s enduring Mandalorian appeal.”

In the latest issue of Geek Magazine, its writing team sat down with Steven Melching, writer of The Clone Wars, and Chris Gossett, Star Wars artist, to gain their insight into the popularity of Boba Fett. This Q&A was a sidebar to a larger feature, looking at the Saga’s standing in the fan community.

Melching accredited Boba Fett’s popularity to the mystique the character carried prior to the release of Empire. He believes the promotional action figure also endeared fans to the character – many impressed by his armor, specifically the fact he was rumored to have taken down Wookiees – even wearing a braid of his Wookiee targets over his gear.

“I think a big reason why Fett became so popular was because we really didn’t know a whole lot about him. He was described as a Mandalorian Shock Trooper. Who the hell were they?” Melching said. “Did they fight in the Clone Wars? Could he be this ‘other’ that Yoda spoke of? All this anticipation made his ignominious demise in Return of the Jedi all the more crushing.”

Gossett chimed in, saying the prequels screwed up the character in his opinion. Making Boba Fett a clone was one of the major problems in the prequels, he said. Gossett believes one of the characteristics beloved about Fett was he was Han Solo without a soul – Boba Fett was what Solo might have become if he made different choices as a smuggler.

“Showing that contrast was one of the functions Boba Fett served, and he served it damn well. The fact that Lucas just dropped him into the Sarlacc Pit was a sign of poor choices to come,” Gossett said. 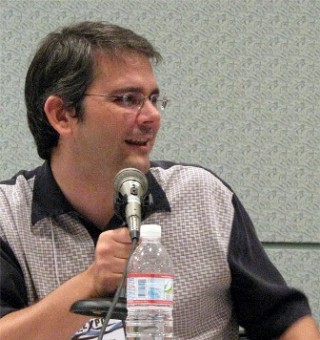 Steven Melching speaking on a panel at the Screenwriting Expo in L.A. in 2008.

According to Melching, the main protagonist of Episode VI was supposed to be Boba Fett. The Sarlacc was a quick solution when George Lucas decided to squash Episode VII-IX into Return of the Jedi – which was supposed to feature Han Solo versus Boba Fett, with the Skywalker story only introduced at the end leading to the next trilogy.

“Fans still refuse to accept that he died in the Sarlacc Pit… He became a major player in the Clone Wars series, and I wouldn’t be surprised if he turns up in Episode VII or as a central character in one of the rumored ‘spin-off’ movies,” Melching said.

What are your thoughts? Comment below and chime in at our #BringBackBoba Campaign page.