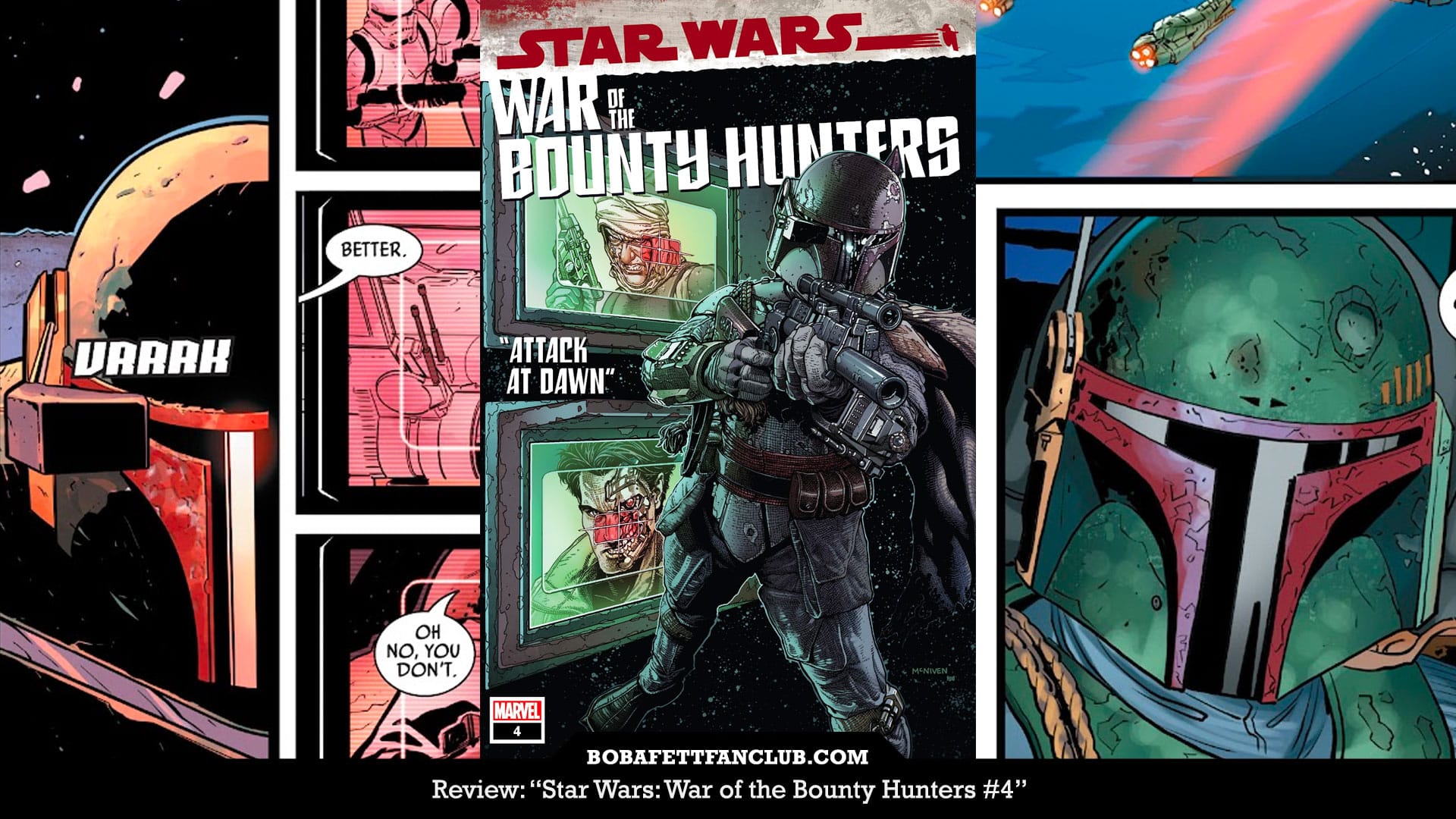 We start where we left off, with Vader threatening to cut Han Solo in half. It’s difficult to take this threat seriously because we all know Han will be fine. Luke refuses to meet with Vader, intending instead to use himself as bait and draw Vader away from his friends. Leia, in desperation, comes out with an asinine plan that would never work: her and Chewy will assault Vader. Lando talks some sense into Leia, so they refrain from doing this and getting themselves killed. 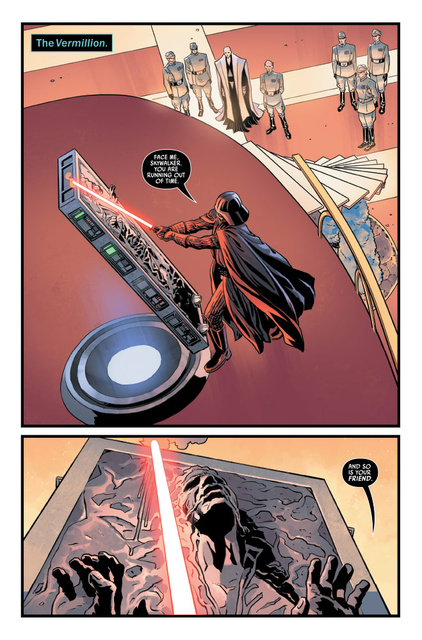 Thankfully for the Rebels, Luke’s move pays off. Vader turns off his lightsaber and decides to board his TIE Advanced to chase Luke’s X-Wing. Thus Vader spares both Han Solo and us from having to endure this standoff continuing to drag on.

Meanwhile, the Hutts are arguing over relinquishing Han Solo. Jabba wishes to concede to Vader, whereas the buff Hutt Bokku wants to challenge Vader. I kid you not; in case you haven’t seen this character, Bokku the Hutt apparently lifts because, despite being a Hutt, he is covered in muscle. 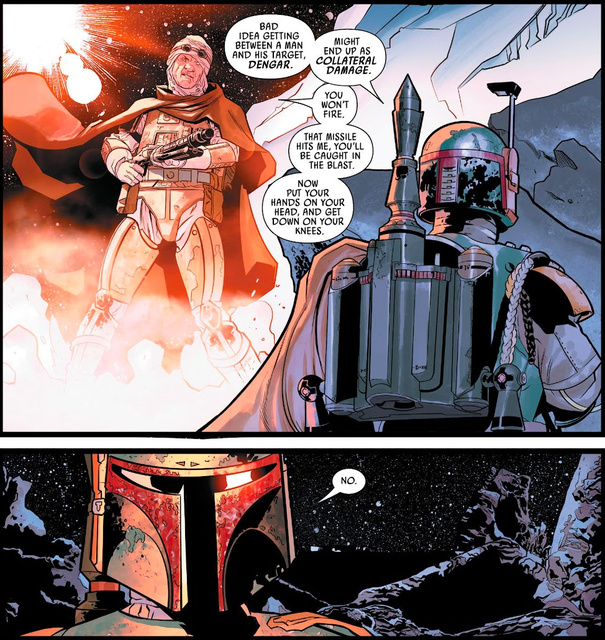 Outside, Boba Fett watches as stormtroopers take the frozen Han Solo to an Imperial shuttle. He is interrupted by none other than Dengar. Dengar tries to get Boba to surrender. Boba refuses, calling Dengar a nobody. Dengar replies that he isn’t a nobody (which is true, he made the shortlist of hunters Vader called in Empire Strikes Back) and neither is Valance. Beilert Valance, the bounty hunter from the comics who I’ve covered in past reviews, pops up with his palm blaster aimed at Boba. Although Valance put up a good fight in his last encounter with Boba, I don’t think he and Dengar can take Boba. As good as the other hunters are, there is a tremendous difference in lethality between Boba and most other hunters; that’s one of the many reasons why he’s the best.

Dengar and Valance open fire on Boba, who avoids the shots with his jetpack and lands nearby. This gives him the space and opportunity to launch his jetpack missile and give the hunters a taste of Mandalore (that’s the catchphrase I use when any character uses a missile). The blast nearly kills our cherished Dengar and sends him flying. Funny enough, he lands on a chunk of ice that has broken away, so he’s now stranded and surrounded by water. 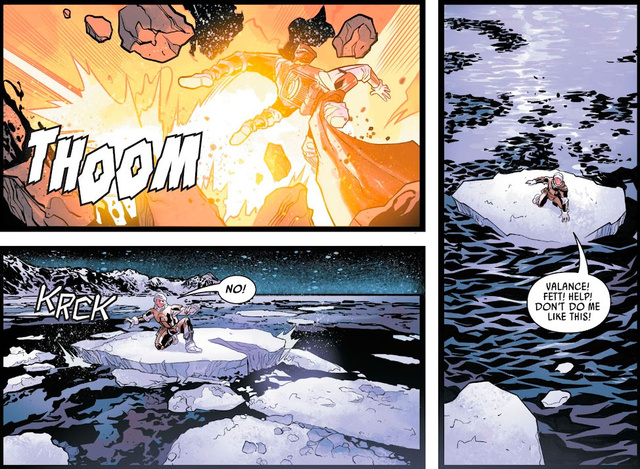 What’s not funny is the butchering of his character: he begs Fett and Valance for help. Anyone who truly knows and understands Dengar would never portray him like this; he’s far too hardened and grizzled. It is atrocious to see such bad, incorrect characterization in a comic. But anyone who has read my reviews knows this is not new for War of the Bounty Hunters. Dengar fought against the Death Watch themselves when they attacked the Hutts in Star Wars The Clone Wars, and had the guts to hit on a femme fatale like Asajj Ventress; this is not a man who begs for help. 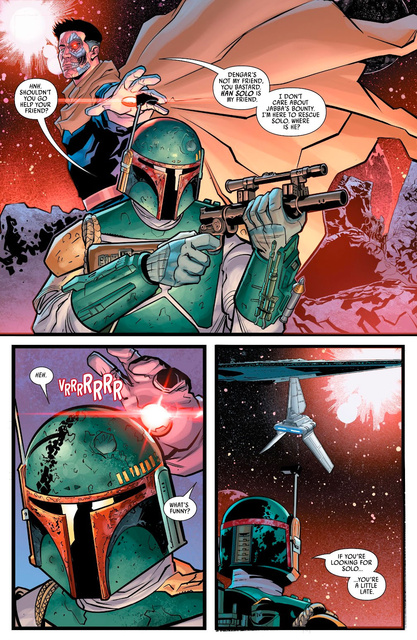 Valance gets behind Boba and aims his palm blaster at his head. However, both he and Boba notice that the Imperial Shuttle where Han Solo was loaded is now taking off into space.

Meanwhile, while the Rebel leaders board the Millennium Falcon, Luke is being pursued by Vader, starfighter to starfighter. This has no real suspense or weight because these panels consist of just main characters who appear in Return of the Jedi. That’s what happens when you use too many main characters at once: you murder any aura of suspense. 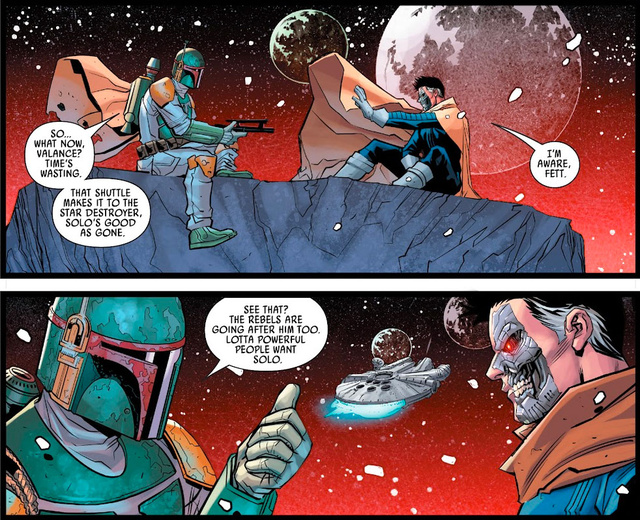 Boba is able to convince Valance to work together. Valance utterly hates Fett due to their complicated history. However, at some point Valance and Han Solo were able to smooth out their differences and become friends. So Valance is interested in saving Han and will even work with Boba to do so. Not sure how this would work out, considering Boba still wants to get paid by the Hutts for Solo. So obviously Valance will fail in this endeavor… 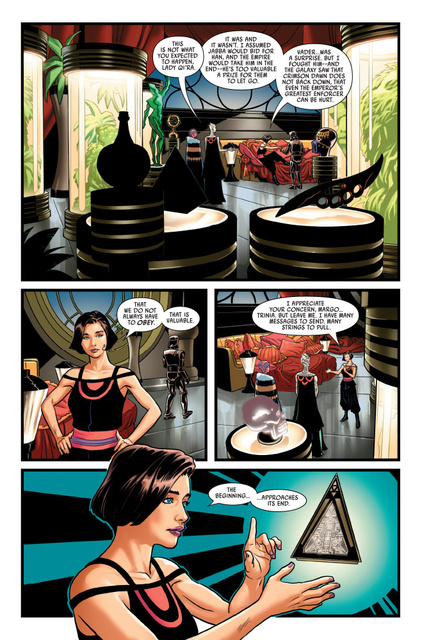 Back in the Vermillion, Qi’ra is being questioned by her subordinates about the events that transpired. She basically says that it’s all just the beginning, and pulls up a diagram of some triangular object. I couldn’t quite make out what it was, but it gives off Sith/Dark Side vibes. Maybe it’s an ancient artifact, or a temple.

Aboard the Imperial shuttle, one of the Imperials notes that multiple ships are rising up from the planet’s surface. The closest to them are “an old YT-1300 Corellian” (the Falcon) and “some sort of custom job — not in the database” (Slave I — excuse me, I mean, “Boba Fett’s Starship”). I thought this quote was pretty cool because it illustrates how far off the radar Slave I is. Slave I is a Firespray, one of the rarest types of ships in the galaxy. (I previously wrote an article precisely about Firesprays in canon.) It seems that Slave I is even more off the radar than Din Djarin’s Razor Crest. The Razor Crest is based on a pre-Imperial design? Guess what, whipper snappers: the Firespray is based on a PRE-CLONE WARS DESIGN. Only REAL OGs will appreciate this. Just like Jango Fett was the original Foundling, Slave I was the original, uh… obscure, exotic bounty hunting vessel.

Lobot, Lando’s cyborg assistant who is on the Falcon, is able to disable the Imperial shuttle through hailing its comms. But before the Rebels can board the shuttle…a seismic charge goes off. Per Valance’s request, Boba did not use lethal force. Rather, the seismic charge was dialed back to 20% intensity. One fifth of a seismic charge is enough to disable the Falcon… imagine what a full intensity seismic charge would do. Make no mistake, in an all-out dogfight Slave I would hand the Falcon it’s final defeat. That claim is based on what was just seen on this panel, as well as the Slave I’s superior maneuverability and weapons load out as seen in Attack of the Clones.

Before the Slave I is able to seize this advantage….dozens of ships pop up. They are obviously the Hutt Clan’s fleet. The final panel shows Bokku the buff Hutt declaring “Now the Empire will learn… why you never insult a Hutt.”

This issue was decent overall. It left us on a unique cliffhanger involving some characters that are not main cast, and thus, don’t have plot armor. Also, it will be interesting to hear how Boba deals with the Hutt fleet. Will they collaborate? Or will Boba be forced to handle them as well? The Hutt offensive is obviously being conducted without Jabba’s approval.

Unfortunately, this issue was also very simple and stale. I am grateful that the boring, moronic, and ultimately futile standoff in Qi’ra’s auction is finally over. That scene dragged out way too long. So the setup for next issue with this potential conflict in space is more interesting. I hope we see the Slave I destroy other starships with the Seismic charges. I think Bokku’s audacity is particularly interesting. It is a curve ball and being enacted by a character with no plot armor. He is crazy enough to defy both Jabba the Hutt and Darth Vader’s wishes, and is thus risking both their wraths as well. Perhaps this will provoke a juicy battle in space, and Boba will finally deliver Solo to Jabba. Here’s to hoping that War of the Bounty Hunters can continue to increase in quality- or at the very least, maintain where it is at the moment.