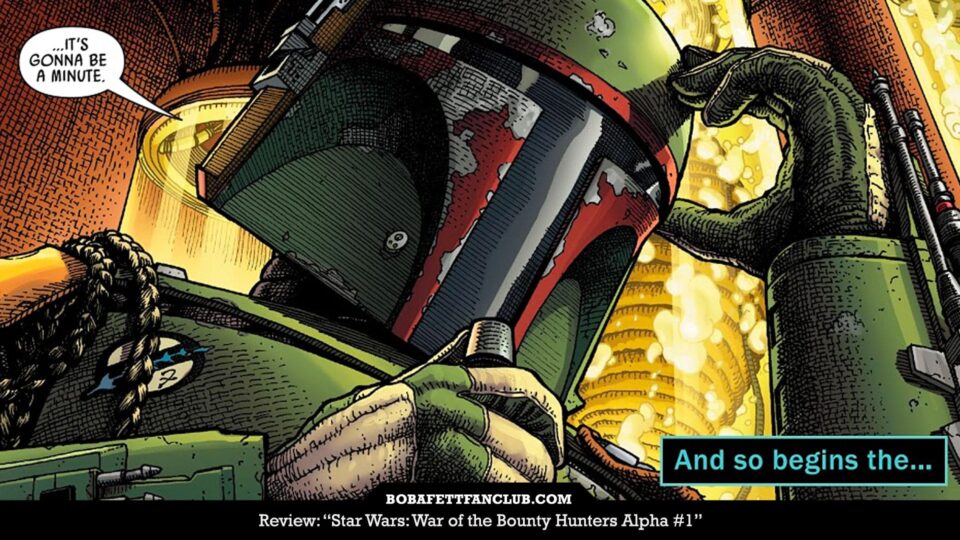 I was cautiously optimistic when I first heard about “War of the Bounty Hunters.” I wanted it to be comparable to “Shadows of the Empire” from the Expanded Universe (now “Legends”). You see, they tell more or less the same story: the aftermath of “The Empire Strikes Back,” and what happened to Boba Fett in between Bespin and Jabba’s Palace. So after reading the first issue, I’m not sure if this series will compare to “Shadows of the Empire.”

The cover of the “Director’s Cut” variant (one of 30 different looks) by Steve McNiven who also did the interior art features a Boba clad in his usual outfit, but completely black. He also has what appears to be a halberd: a long pole type weapon with an ax blade and a spike at the end. I was excited to see if he would use this, because it made me think of a comment Robert Rodriguez made when he directed Boba Fett’s return in “The Mandalorian.” He said something like “if Mando is a gunslinger, then Boba Fett is a barbarian.” This comic had both good and bad aspects, but at least it delivered in regards to seeing Boba Fett fight like a barbarian. Also, I suspect many fans will want to cosplay Boba Fett in his black armor. 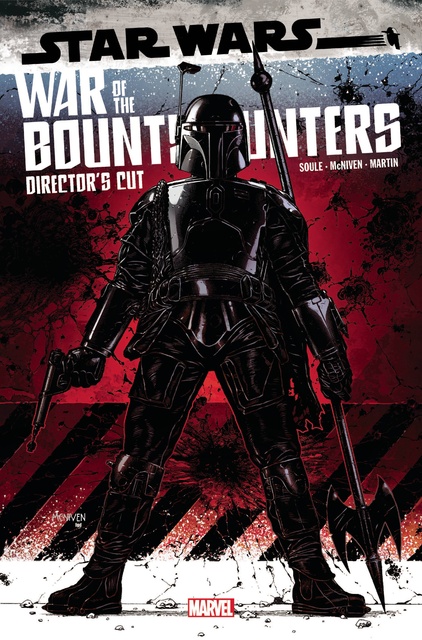 The story begins with Boba Fett aboard Slave I. A panel shows that he has charted a course between Bespin and Tatooine. I would assume that this story takes place after Boba’s detour to finish off Nakano Lash in the recent canon comic, “Star Wars: Bounty Hunters,” but this isn’t made clear. Boba Fett is informing Jabba the Hutt’s majordomo, Bib Fortuna, that he has Solo. However, he cuts the transmission short when the carbonite slab holding Han Solo begins to beep. It turns out that the carbonite is unstable, and Han is slowing thawing out.

To fix this, Boba lands on the smuggler moon of Nar Shaddaa. (If you’ve played “The Old Republic,” you’ll appreciate that they kept the nighttime casino vibe in this comic.) He meets with some kind of Besalisk “doctor,” Doc Ragon, who is the same species as Obi-Wan’s 4-armed friend Dexter Jettster from “Attack of the Clones” and the Jedi Master Pong Krell from “The Clone Wars.” Doc tells Boba that he can stabilize Solo and keep him alive. He asks for cash up front, and Boba says he can pay double once he claims Jabba’s bounty. Doc Ragon refuses, and this little exchange presents what is perhaps the biggest issue of the comic. Boba Fett shouldn’t be broke nor unable to pay this fee. I’ll get back to this point, because I’ve got quite a mouthful to say about it.

Since Boba is unable or unwilling to pay, Doc Ragon instead proposes that Boba Fett kill a target for him: Wyrmen Lictor. She is a pit fighter who killed a fighter Doc Ragon sponsored, so he wants revenge. However, she is too well-protected for an assassination attempt because she is valuable to the Kanji Hutts. Instead, Boba Fett must join the pit fights and kill her legitimately; she is the current champion.

Boba Fett agrees. He registers for the fights, using his father’s name: Jango. Also, we see Boba Fett has temporarily “nano sprayed” his entire outfit black in order to disguise himself and not be prematurely recognized by the Kanji. It’s a bit monotone, but it looks pretty cool too. 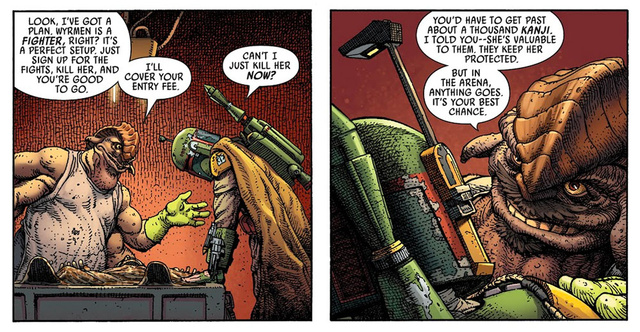 We see a shot of Boba with a halberd — not sure if it’s borrowed or part of his versatile and vast arsenal. The announcer introduces him the way you would expect when a fighter is about to make an entrance, giving him a nickname and then saying his name, in this case, “the Beskar Brawler, JANGO!” When the announcer says this, we are treated to a touching flashback where Boba Fett remembers being in the Geonosian arena, picking up the helmet of his slain father Jango Fett. It must be a remarkable moment for Boba Fett to now fight in an arena, too, 25 whole years after his father’s death. It is a powerful moment and perhaps my favorite page in the whole comic. 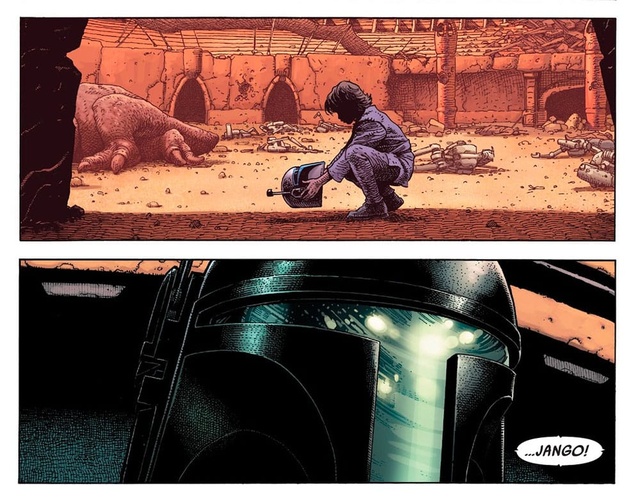 We are treated to an amazing sequence where Boba Fett dispatches many enemies. It is similar to the gladiator sequences from the show Spartacus. Boba Fett first impales “Jonny the Sting” with his halberd. He shoots down Skullicon with his blaster. He decapitates a Duros with a gladius, a short sword favored by gladiators. Finally, he blasts Bigbot right between the eyes. It is an awesome sequence of fights and it would’ve been amazing to watch in live-action. Apparently there is no real restriction about what your weapon load-out is, so this favors Boba and his arsenal immensely. The crowd, of course, goes wild after each victory. 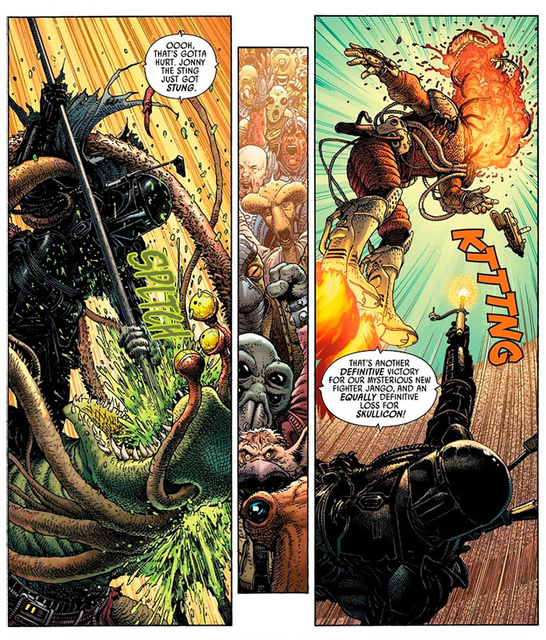 After defeating these opponents, Boba Fett will now fight the aforementioned Wyrmen Lictor. She is quite odd looking: essentially a large spider-like humanoid woman with a spider’s abdomen and legs attached to her back. The arena has been modified to have round platforms hanging on ropes. Unfortunately, this favors Wyrmen because it creates what is basically a spiderweb. Nonetheless, this will be an epic duel.

Boba Fett takes to the air with his jetpack, and the two combatants exchange blaster fire. Boba is dual wielding the blaster pistol that he has holstered in “The Empire Strikes Back” and it is possibly the first time we see him use it in canon. He is able to launch an onslaught of damage with his wrist rockets and flamethrower. However, Wyrmen lands a direct hit on his jetpack with her webbing, similar to how Spider-Man uses his webs. She rips it off Boba’s back and sticks it to a platform. She closes in for the kill, and Boba is forced to engage at close range since he can no longer fly. He cuts off one spider leg with his blade, but is viciously impaled by another. Right as it seems she is about to kill him, Boba presses a button on his gauntlet and detonates his jetpack. The explosion damages the spider and they both fall. Boba is able to stay on top of a platform, while that same plaform squashes Wyrmen like a bug and kills her. Boba Fett has completed his mission and also become a gladiator champion. 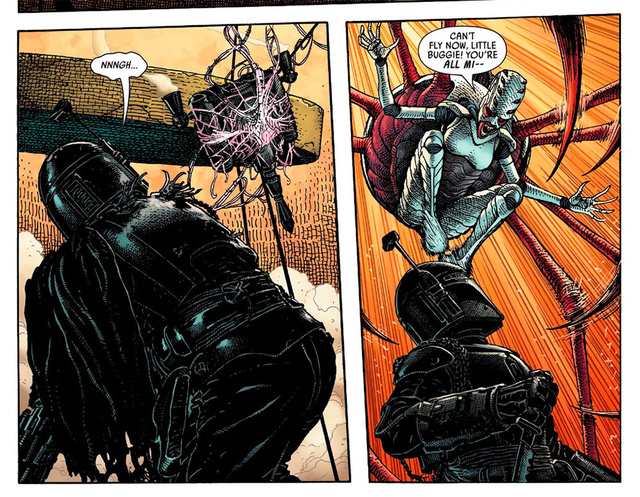 The Kanji are unwilling to pay Boba his payday, and Boba Fett simply decides to walk away. I wish he had disintegrated those pathetic scum on the spot, but Boba is only concerned about returning to Han Solo.

Next, we see a group of criminals kill Dr. Ragon and steal Han Solo. Boba Fett arrives too late, and is contacted by Bib Fortuna. Boba Fett promises to deliver Solo, but tells Bib Fortuna to tell Jabba “it’s gonna be a minute.” Thus… the “War of the Bounty Hunters” begins. 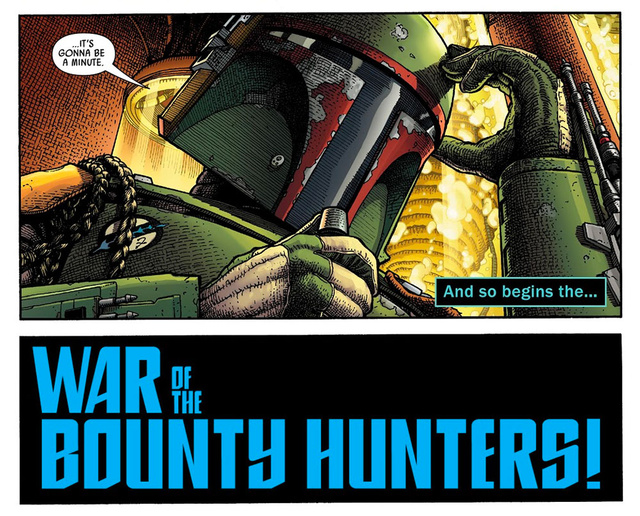 I had mixed feelings about this comic. The good outweighs the bad, but not as much as I would hope.

Here is my main issue: Boba Fett somehow having an issue with money. In this era, Boba Fett is still the most successful bounty hunter in the galaxy. Therefore, he should most certainly have an abundance of credits at this point. Furthermore, this takes place not long after The Empire Strikes Back. This would mean that Boba Fett has already claimed the bounty that Darth Vader offered for Han Solo: “There will be a substantial reward for the one who finds the Millennium Falcon.” In fact, the opening crawl of this very comic acknowledges this: “Fett … claims the bounty.” The Oxford Languages dictionary definition of bounty is “a sum paid for killing or capturing a person or animal,” so Fett claimed his fee.

So even if Boba Fett was somehow “broke” during the movie — which he absolutely wouldn’t be — then he would still have the credits he earned from tracking down Han Solo to Bespin, and helping Vader use Solo as bait for Luke Skywalker. I highly doubt Boba Fett would leave Bespin without being paid, nor would Vader be petty and swindle him. Vader obviously respects Boba Fett and the Empire has more than enough credits. So thus, Boba Fett not paying for Dr. Ragon to stabilize Solo presents a huge issue. Boba shouldn’t be “desperate for a payday” as the comic’s opening crawl suggests… because he literally just got one. It seems that the author, unfortunately, has overlooked this fact.

I’d hope the series understands the prestige and wealth that comes with being the best bounty hunter in the galaxy. Unless this point is somehow explained in future issues, it is a glaring oversight and unravels the foundation of this very story. Basically, none of this should be happening because Boba Fett would’ve paid and have been well on his way to Jabba’s Palace with a stable Han Solo.

If we overlook this mistake, the rest of the comic is solid. The arena fights were fantastic and Boba Fett absolutely rocks it with his barbaric and versatile fighting style. The halberd, the black suit, and the Jango references were all excellent interwoven together. Boba’s duel against the spider monster Wyrmen Lictor was especially satisfying.

I would have given this comic a higher score of a 4 out of 5, but I think the foundation of the plot is already tarnished with Boba’s absurd credit issue. It causes a negative chain reaction where every event moving forward, like I said, technically “shouldn’t be happening.” When Disney took over Star Wars, everything was supposed to be canon, even just a comic. So to have a glaring oversight set in stone and have the canon concrete dry over it, is truly a shame. I’ll gladly eat my words if this gets explained. My criticism comes from a place of caring for coherent, high quality stories. But as of right now, I’m less optimistic about the crossover project that is the “War of the Bounty Hunters.”