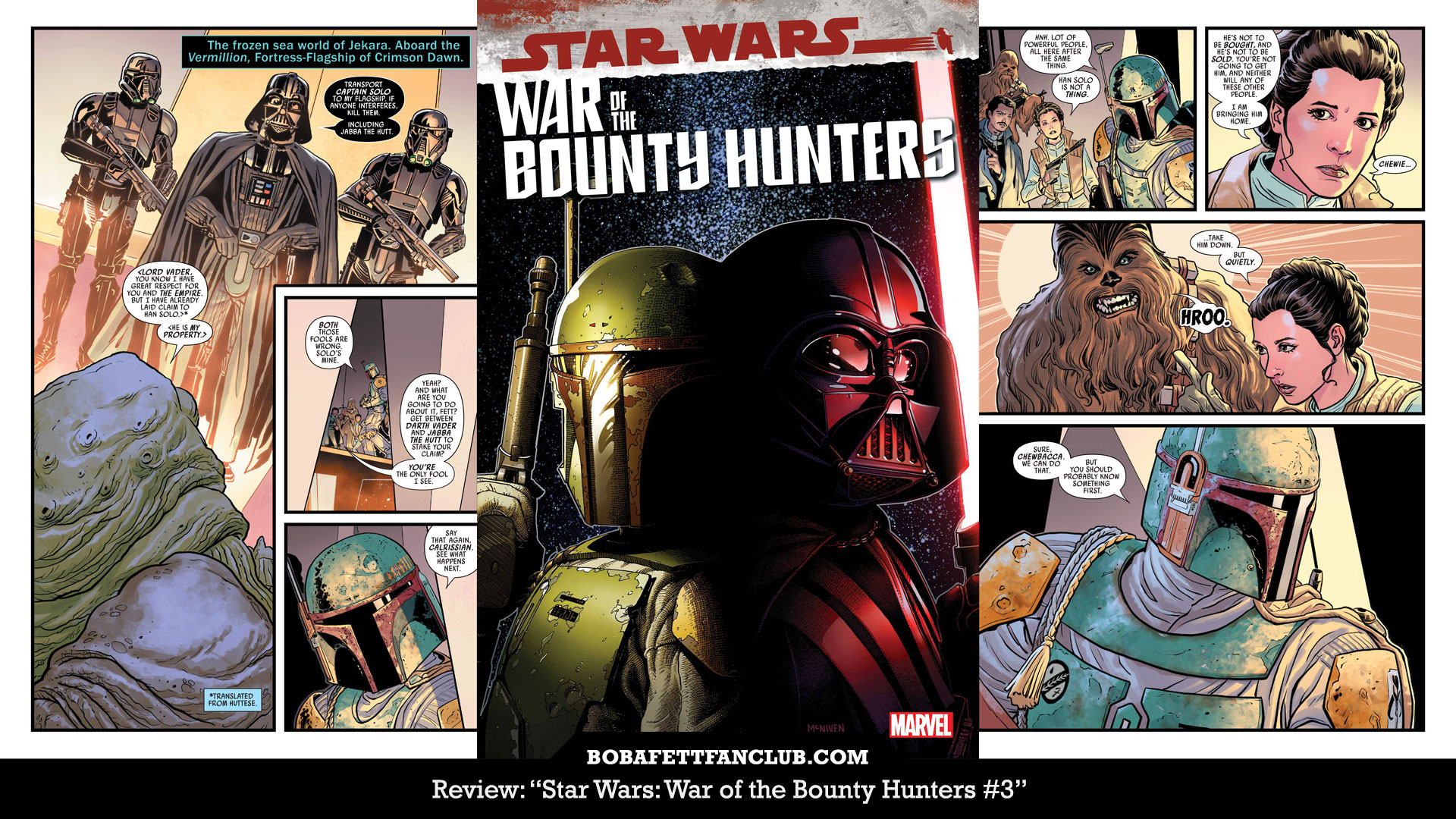 We continue where we last left off, with Darth Vader himself going out of his way to interrupt the auction for Han Solo. Meanwhile, Boba Fett is hanging out with the main cast of “Return of the Jedi,” watching events unfold. 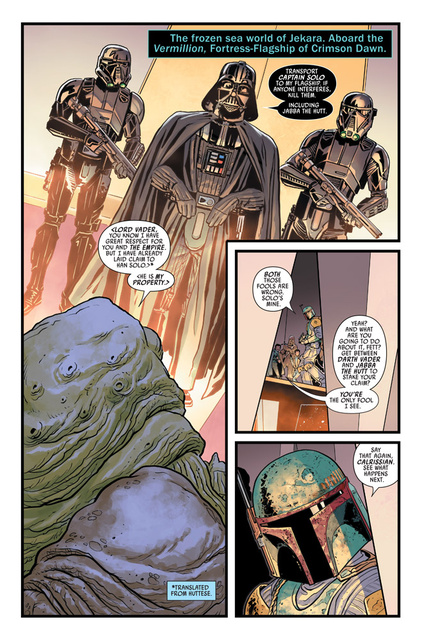 Qi’ra is watching as well, and tells her subordinate Matgo that she knows “how to handle a Sith Lord.” I thought this was a laughable and cringey line. I genuinely can’t tell if the line is written as a joke or if we are meant to take this seriously.

Back with Boba and friends, Leia wants Chewbacca to take Boba Fett down quietly. Boba mentions to Chewy that he has Wookiee braids on his shoulder. This obviously provokes Chewy, and for some reason Boba Fett lets Chewy grab him. This is out of character because Boba would certainly be anticipating an attack after upsetting a Wookiee. So this is yet another instance of stupidity to humor in what is now a growing list of dumb moments like this one. The events that transpire are so stupid that it kills the immersion. This is really what happened between “The Empire Strikes Back” and “Return of the Jedi?” 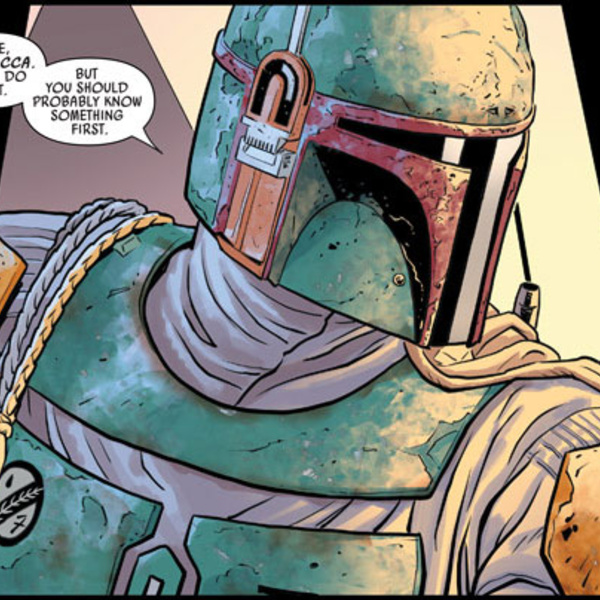 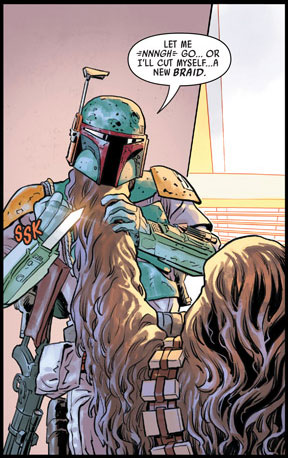 While Boba and Chewy “struggle” (or should I say, Chewy essentially holds Boba for 3 or 4 pages) Leia and Lando decide whether to interfere. Lando utters a hilariously sad line: “Beat his ass, Chewbacca.” Boba uses his legs to place an improvised triangle choke around Chewbacca. A cool move, unlike the rest of what has been seen so far in the comic. It gets even cooler as Boba lights Chewy on fire with his flamethrower. This is realistically what would’ve happened from the very beginning. But better late than never I suppose. 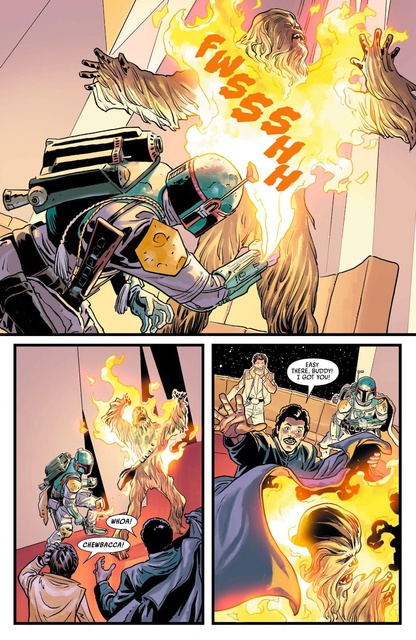 No shade to Chewbacca — I like and respect that character — but he gets absolutely lit up. Lando uses his cape to put out the flames and save him. The Rebel leaders try to make a deal with Boba: they offer to pay the bounty that Boba would’ve gotten from Jabba. Boba has a reputation to maintain as a bounty hunter. When he takes on a job, he completes it. And everyone in the galaxy knows that. Still, I couldn’t help but briefly muse about the idea of Boba joining the Rebels. It would have been an interesting “What If” scenario, and we would’ve seen him wreck Stormtroopers a bit sooner than when he returned in The Mandalorian.

Meanwhile, the entire time this was going on, Vader was negotiating with the crime lords, mainly Jabba the Hutt, to take Han Solo with him. They comply, as they obviously have to. Vader has the entire military and political might of the Empire at his disposal. Not only that, but he is a Sith Lord: he can literally slaughter everyone present if he feels like it. Which makes the next sequence of events quite a joke.

Qi’ra challenges Vader to pay one million credits for Han Solo. When he refuses, he ignites his lightsaber while Qi’ra ignites 2 blade with electrified red lightning. They look similar to that butter knife Dryden Vos was wielding in “Solo: A Star Wars Story.” 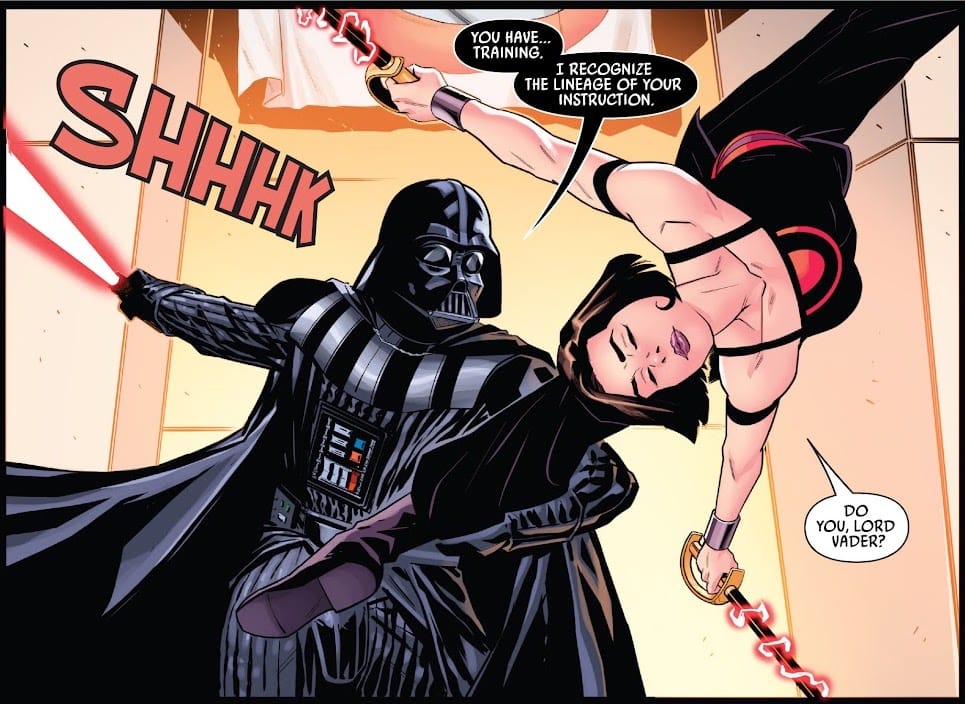 They fight for a bit, and Vader notes that she has “training.” This would obviously be from Darth Maul, the former leader of Crimson Dawn. Regardless of this training, there is no way Qi’ra would ever hold her own in a duel against Darth Vader. But this comic series already humors a lot of absurdity, so I suppose this is par for the course.

Some of the shots of the 2 of them dueling seem to be an homage to Obi-Wan and Maul dueling in The Phantom Menace. If that was a subtle Easter Egg, well done, that is kinda cool and I will give credit where credit is due. 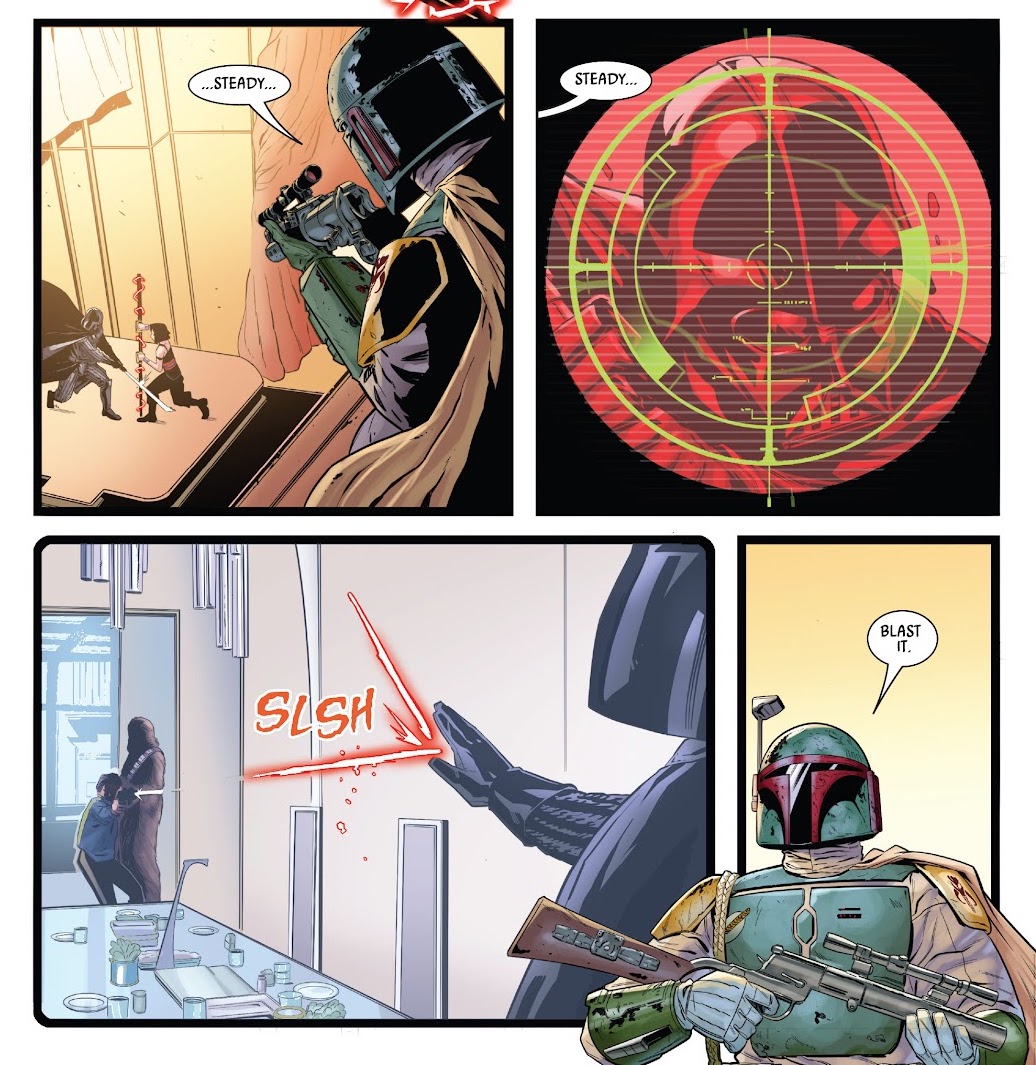 While they fight, Boba aims his trusty EE-3 at Vader. However, he recalls Vader deflecting Han Solo’s shots on Bespin. He realizes that he will not be able to assassinate Vader so easily, so he relents.

Vader pushes Qi’ra away with the Force, kills a few people to make a point, and then circles back to her. But before he finishes her, he senses Luke Skywalker on the way. Perfect, now the entire main cast of “Return of the Jedi” is truly here! And this whole time, we thought they barely caught up with each other in that movie. But in reality, they all got together in this fun “Scoundrel’s Ball.” I wonder why no one brought up this amazing reunion in the movie? Of course, I’m kidding. All of this is stupid. When you shoehorn all the relevant characters together in a random, off-screen event, it makes their eventual and actual reunion on-screen make a bit less sense and be a bit less impactful.

Anyway, to wrap up: Vader is able to get the Imperials to contact Luke. He tells Luke that he will go with him. If not, Vader will cut Han Solo in half. Truly a threat worthy of a Sith Lord! That isn’t sarcasm, I genuinely liked that part and it’s one of the few things done well in this comic.

In conclusion: although this comic has a few cool moments, it is not worth the price of both “Shadows of the Empire” being replaced, and both “The Empire Strikes Back” and “Return of the Jedi” now having weird, non-sensical context. Imagine picturing all this crap when those two movies actually came out. Imagine trying to tell the original generation of Star Wars fans: Yep, an ordinary human held their own against Vader, they had a big “Scoundrel Auction” over Solo, and Boba Fett is actually a chatty Kathy! That thing about being a laconic enigma who somehow gained Vader’s respect in the past? Nah, this guy actually LOVES to make cheesy one liners. Also, despite being the best bounty hunter in the galaxy… he’s broke. Yep, makes a LOT of sense.

At this point, enough comics from this crossover project have come out that we have an idea of what the overarching picture will look like. I’m curious enough to see how it ends, but there’s no excitement. The material is childish and the plot is somewhat forced. This is exactly why I wished comics used mainstream characters on a sparse basis. Not only would their interactions on-screen be free of dumb off-screen context, but the comic book characters are more versatile. You can do anything with Beilert Valance and Dr. Aphra. They were literally MADE for this.

No shade against Qi’ra, I like that character too. But she is in over her head messing with the likes of Darth Vader. She is simply not in the same class as the main saga heroes and villains. Although, I will say she would probably whoop Han or Lando any day of the week in a melee fight. But I don’t mean just that she is in over her head physically, I also mean in terms of relevance. Her and Crimson Dawn are not even a blip on the radar that is the Galactic Civil War. Like Vader himself said in this comic, in his world she barely even exists. This comic wants to force the relevant players to stoop to a lower level.

This situation with the Scoundrel’s Ball has dragged on for way too long. I hope the conclusion to this event is impressive in some way, but at this point I’m just expecting more cringe, absurdity, and lackluster storytelling.