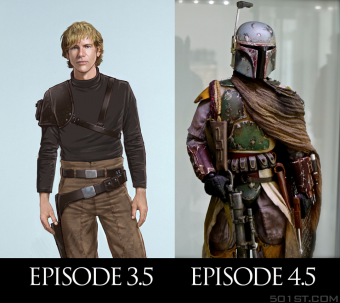 Fan made graphic. Left: Young Solo concept art by Paul Simms. Right: Mythos Fett by Sideshow Collectibles. — No confirmation yet, despite some drama today. Origin stories for Han Solo and Boba Fett would presumably be between Episodes 3, 4, and 5 respectively.

One fan site, Nuke the Fridge, is boldly reporting today that the origin films will be about Boba Fett and Han Solo. But there’s no attribution on the article to follow up, especially in regards to quoting Bob Iger at Disney.

In fact, their article quotes a Movieweb post in February 2013. Whoops. And no actual quote from Bob Iger is mentioned or confirmed elsewhere.

As an official Star Wars writer Bryan Young noted on Twitter, “People need to learn how to properly source, provide links, and learn the definition of ‘confirmed.'” We wholeheartedly agree.

We’ll update this article as more information is available, but for now, this looks like a false alarm on the part of “Nuke.” (Editor’s note: they later retracted a lot of the affirmative language in their post.)

In the meantime, hat tip to Chris F. Bartlett for the 501st.com image. Pretty cool if it ends up that way. And what do we know about the rumored origin films? Check out our earlier article: “Would Boba Fett’s Origin Story Make a Great Feature Film?”