Did "Life Debt" Continue a Slow (Yet Canon) Reveal of Boba Fett's Fate?

Published July 12, 2016 • Updated March 22, 2021 1:34am • Written by Quinn Crain • Filed under Fettpedia
Looking for The Mandalorian Season 2 spoilers? Cobb Vanth has now been confirmed to be wearing Boba Fett’s “Return of the Jedi” armor, although Cobb is not Boba Fett nor pretending to be him (ala Jodo Kast).
Need the lowdown on whether Boba Fett is canonically alive or dead? See our Fett Fact check.

“Star Wars Life Debt: Aftermath” was released today. If you’re like me, you’ve probably been waiting in anticipation to read up more on Boba Fett’s ultimate fate, after his scavenged armor was supposedly referenced in the last book, “Aftermath.”

(If you need a refresher, catch up on the first book’s tangled mystery of Fett’s survival and the current state of what’s canon versus what’s not in our Fett Fact Check, “Is Boba Fett Dead or Alive?”)

Here’s an excerpt from “Life Debt” with yet another interlude on Tatooine. (Bold emphasis added.)

“He thought maybe to tame the glorious monstrosity at the bottom of the Great Pit of Carkoon (and, failing that, to throw himself into its maw), but the mighty Sarlacc was injured. Burning wreckage from the sail barge had rained upon it. Already its body—considerably more massive than the mouth exposed from the sliding sands—had been partially unburied, its stoma-tubes slit open, its digesting innards pillaged by industrious Jawas. They pulled out weapons and armor, droids and tools. And skeletons, of course. The creature of Carkoon had a pure purpose, to wait and to eat, and now it was left to thrash and wail in the grip of pillagers. Malakili wept at another life without purpose.”

It’s still ambiguous, but… it almost seems more like it was excavated by the Jawas, because of the large removal of sand to expose the body, even partially. It also seems like the beast was surgically slit open, where one would expect it ripped open from explosives had it been Fett from the inside out, which would’ve also likely cleared some of the sand as well. That is, unless Fett was surgical about it himself, using blades or lasers, etc.. Then again, there were skeletons found… perhaps Jabba wasn’t so truthful about the thousand years of digestion.

“There, a man in Mandalorian armor, the suit of it pocked and pitted and streaked with scars. Armor that looks eerily familiar, and Malakili’s innards clench at the sight of it. A carbine hangs at the man’s side. Next to him stands a tall woman. Head-tails which means she’s Twi’lek—though one of those head-tails is mangled, its end puckered with scar tissue. At her hips hang twin pistols.

The man removes his helmet. His cheeks are lined with salt-and-pepper stubble. He winces against the double suns.

“I’m Cobb Vanth. Lawman and de facto mayor of what used to be Mos Pelgo.””

Well, it would seem that Malakili may remember the visage of that particular set of Mandalorian armor. So, what does this mean? Just as it was with the last book, the case is still pretty ambiguous. Was Boba Fett able to cut himself free, and then for some reason abandon his armor? Is this all some kind of red herring? Or is Fett dead? Well, there is no clear answer, and we may have to wait another year for another spoonful.

However, you may still consider that the armor Cobb Vanth is wearing is a complete set, assumedly flight suit and all… so, make of that what you will, and happy hunting!

Continue with the review of Book 3. 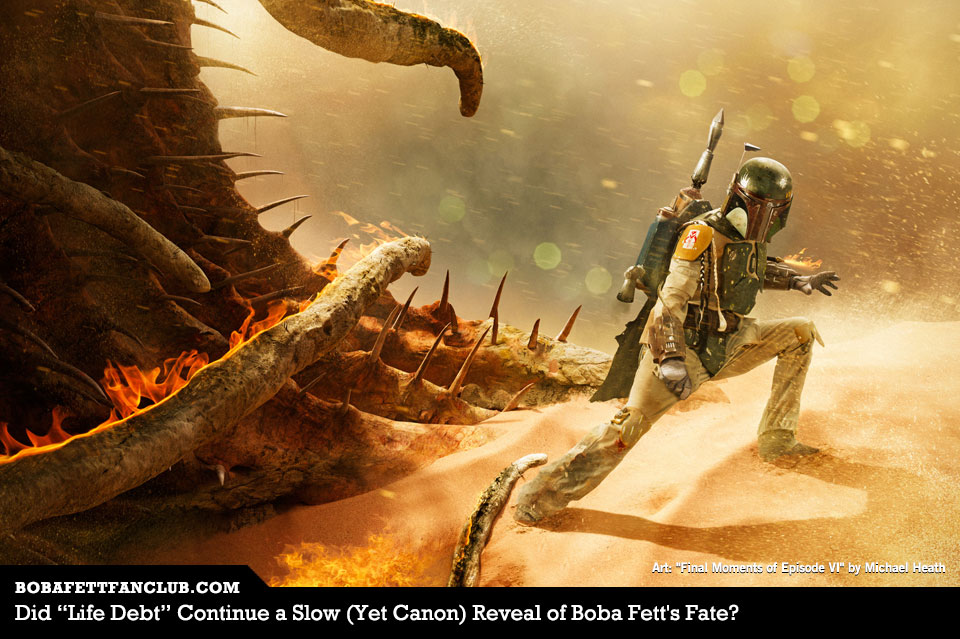