Is That Boba Fett's Armor Post-Sarlacc in "Star Wars: Aftermath?"

Published September 6, 2015 • Updated October 30, 2020 6:46pm • Written by Quinn Crain • Filed under Fettpedia
Looking for The Mandalorian Season 2 spoilers? Cobb Vanth has now been confirmed to be wearing Boba Fett’s “Return of the Jedi” armor, although Cobb is not Boba Fett nor pretending to be him (ala Jodo Kast).
Need the lowdown on whether Boba Fett is canonically alive or dead? See our Fett Fact check.

You know about how Disney wiped clean all the Star Wars lore outside the movies, “Clone Wars” and “Rebels” series as “legends?” Well, that left Boba Fett’s fate up in the air: aside from George Lucas chiming in recently about his survival, it was the now unaccredited books that explained his escape and survival after Return of the Jedi.

Recently, the new Lucasfilm Story Group — which handles the Star Wars canon of the overall series — specifically brought up Boba Fett, and that he is currently both alive and dead until a story pulls him out of the pit.

During an interlude on Tatooine, a character called Cobb Vanth is introduced in the new book called “Star Wars: Aftermath” by Chuck Wendig. Cobb decides to aid a pompous representative of a mining organization called the Red Key Company named Adwin Charu. Adwin can’t convince the Jawas into allowing him to see their rare items, until Cobb stepped in. After looking through a stash of prized goods, the two come across a complete, battered set of Mandalorian armor, “picked and pocked by some sort of acid. It had been through hell and back.”

“I have a way of sussing things out. I know that things are changing. Not just in the galaxy, but here at home, too. The Hutts still haven’t shaken out who’s next up to fill Jabba’s throne — if you can call that flat slab of his a throne. Seems like this might be a new day for Tatooine.”

“Yes, we certainly hope so,” Adwin idly responds, mostly ignoring the man’s small-talk prattle. He’s happy Cobb got him in here but now wishes the man would just leave him alone. Adwin spies a large, long box on the floor. He whips off the ratty cloth that’s covering it and —

From the box, he withdraws a helmet. Pitted and pocked, as if with some kind of acid. But still– he raps his knuckles on it . The Mandalorians knew how to make armor, didn’t they? “Look at this,” he says, holding it up. “Mandalorian battle armor. Whole box. Complete set, by the looks of it. Been through hell and back. I think my boss will appreciate this.”

“I actually think I might take that home with me,” Cobb says.

“I think not,” Adwin says, turning around, the helmet tucked under his arm. The blaster at his hip suddenly feels heavy, pendulous. Eager to be drawn. A strange sensation, that. Adwin feels like he’s really getting into the spirit of this planet. He’s never had to shoot a man before.

The passage above — bold emphasis added — strongly implies that the armor is Boba Fett’s… but it has somehow made its way out of the Pit of Carkoon. Fett himself is no where mentioned alive, nor is his body, bones, or any sort remains save for the armor itself alluded.

Adwin takes an interest in the suit to present to his boss — a Weequay named Lorgan Movellan — but Cobb decides to keep the armor and appointed himself the sheriff of Tatooine. After a brief showdown that leaves Adwin wounded, he is left alive so as to spread word to his benefactors of the newly self-appointed lawman.

This may bring us back to rumors of a new character taking the mantle of Boba Fett not long after Disney’s takeover… or perhaps even further back to Jodo Kast, the Fett impersonator.

Personally, I feel that the armor made it out of that hell hole in the desert with the help of its original owner, who then abandoned the suit for reasons that may include maintaining a low profile to finding the suit compromised beyond repair of its full potential, or for whatever other reason have you. Then, the discarded suit was discovered by Jawas scavenging through the wreckage of Jabba’s sail barge, and then treasured it deep within their Sandcrawler as a valuable piece of merchandise, which was then found by Cobb.

I say this adamantly, because I have serious doubts that the Jawas have discovered a secret of diving down the Great Pit of Carkoon to safely scavenge through whatever was ingested by the Sarlacc… and I doubt the armor was regurgitated alone, as it is described as a complete set.

I certainly can’t claim anything with certainty, even if this suit indeed is Fett’s… but if it is, I think we can surmise that the details regarding Fett’s survival were left intentionally ambiguous… yet, we are much closer to an answer now. We may even come to learn that this was the book that pulled Boba Fett from the pit… and also introduced us to a new, interesting character that may become tied with Fett’s legacy forever.

Boba Fett is also mentioned by name once in “Aftermath” on page 183 within a different context:

Mercurial’s eyes flash to a nearby rooftop. His eyes go wide. His jaw, slack. He summons the image in his mind and says: “Boba Fett?”

Dengar wheels toward the rooftop, the gun barrel turning. And that is Mercurial’s opportunity. He flings one of the batons — it cracks Dengar on the top of his forehead as soon as he whips his head back around . As his skull snaps back, Mercurial is already leaping forward and driving a knee into the side of the old bounty hunter’s face. Then an elbow against his collarbone. A baton against his wrist . The gun drops.”

Continue with the review of Book 2.

(Artwork by Cristi Balanescu, made for the official “Edge of Darkness” expansion for Star Wars: The Card Game.) 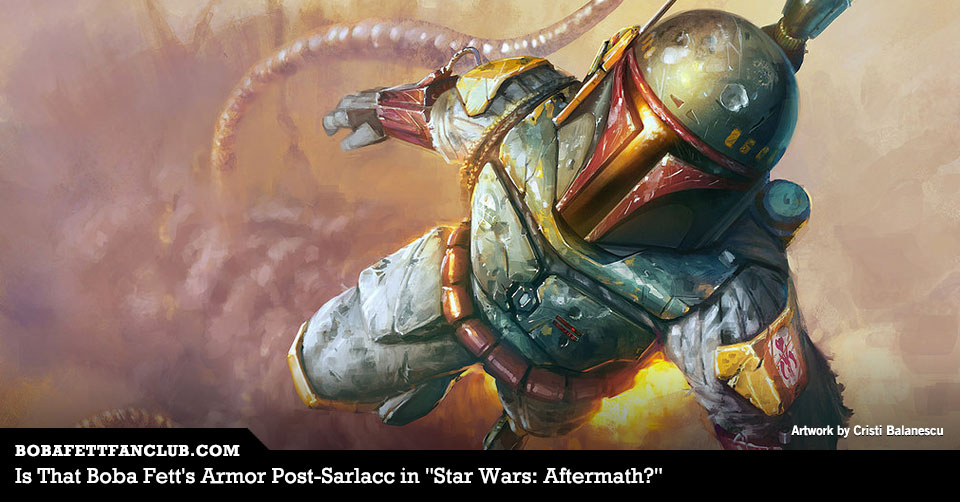