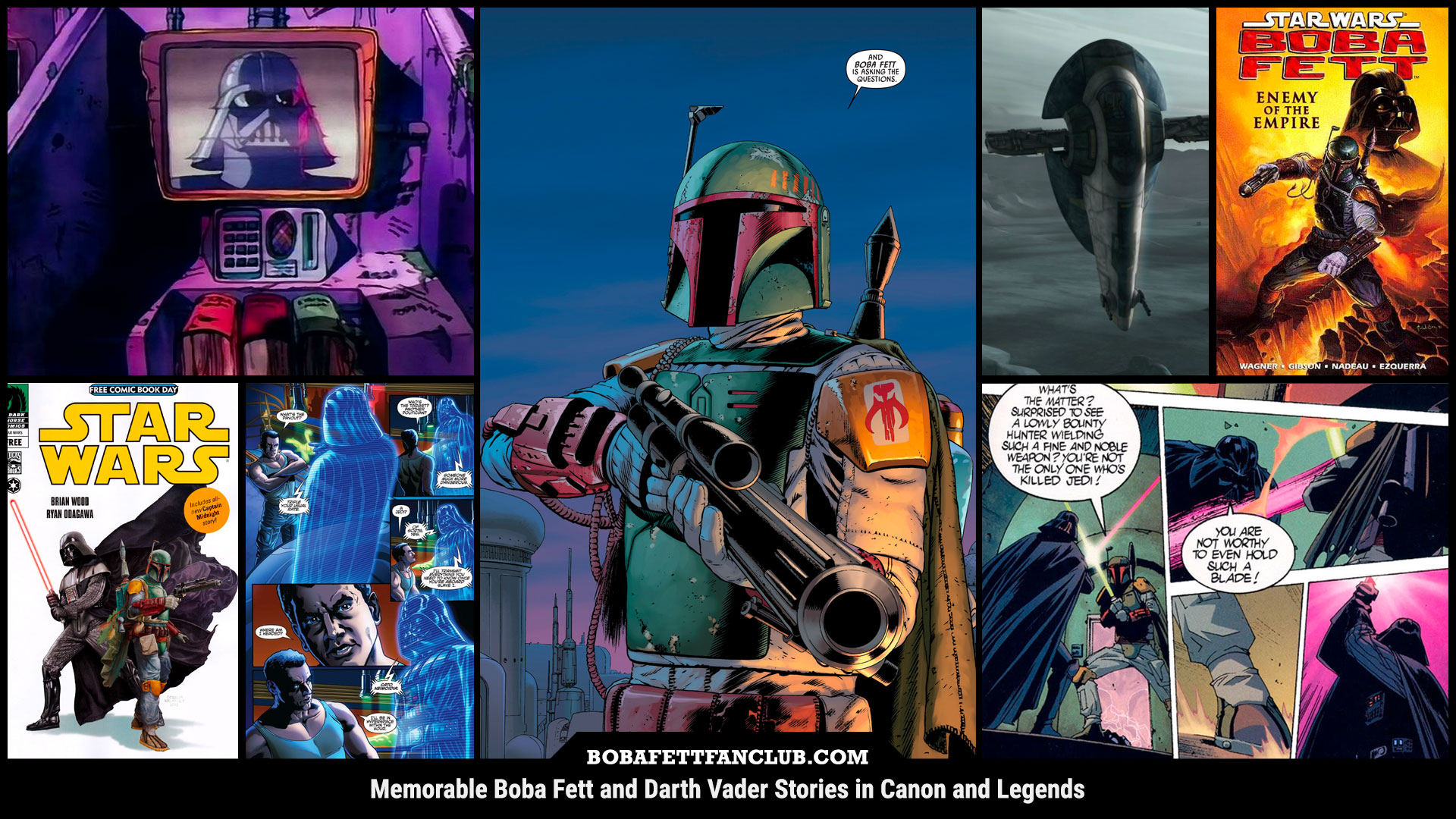 Boba Fett made his Star Wars cinematic debut alongside Darth Vader in The Empire Strikes Back, being admonished by the Sith Lord to avoid disintegrations in his search for the Millennium Falcon. But there’s far more to the pair’s relationship than what we see in the original trilogy. Besides “Empire,” here’s a round up of the top Canon and Legends moments between Vader and Fett to understand their history beyond the big screen. 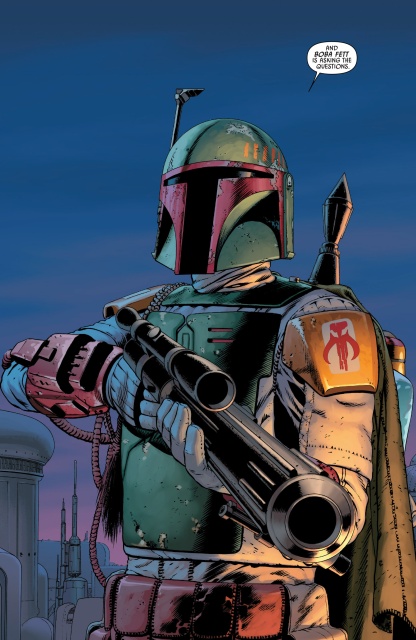 In the fourth issue of Star Wars (2015), Vader hires Boba Fett to track down Luke Skywalker after the Death Star is destroyed. Fett has a brief duel with Skywalker in Obi-Wan Kenobi’s old Tatooine home in the Jundland Wastes in issues five and six before Luke escapes. This is an important piece in Vader and Fett’s relationship because it’s their first Canon meeting. Fett returns to Vader empty-handed, except for the last name of the pilot who destroyed the Death Star: Skywalker. That’s when Vader learns he has a son. 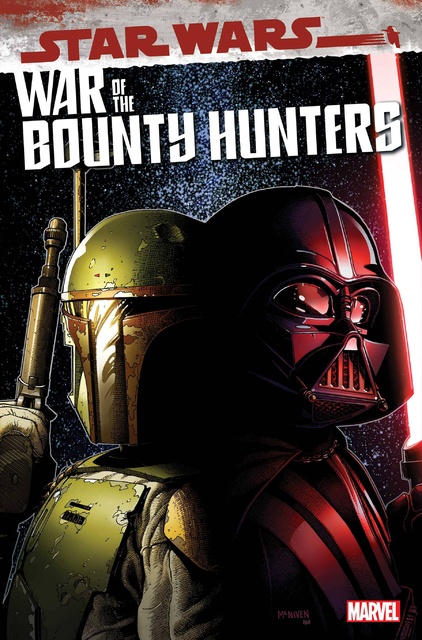 In the third issue of “War of the Bounty Hunters,” the carbonite slab that holds Han Solo is stolen from Fett by the crime syndicate Crimson Dawn and its leader, Q’ira, then brought up for auction. Vader and Fett arrive separately to claim the frozen Solo, but Q’ira confronts Vader when he says he is taking Solo for the Empire – without payment. While Vader and Qi’ra duel, Fett has the chance to blast Vader from a perch above the fracas. After remembering how Vader was able to deflect Han Solo’s blaster shots with just his hands at the Bespin dinner, Fett chose not to risk it. He instead waits until Vader is distracted by feeling Luke’s presence to move in to reclaim his prize. Although it is a brief interaction, this is a noteworthy moment for Fett. With Vader distracted, all it would have taken is a slight pull of the trigger and the Skywalker saga would have been changed drastically. 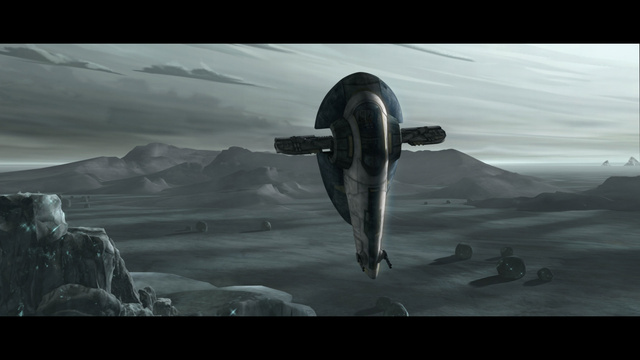 Though it is technically not an interaction between Boba Fett and Darth Vader, we see a young Boba and Anakin Skywalker have a close encounter in “The Clone Wars” TV series. In the season two episode “R2 Come Home,” Boba leaves a trap for Mace Windu inside a downed Republic Venator to get revenge on the Jedi for killing his father, Jango Fett. He uses Jango’s helmet (or at least a helmet like Jango’s, it’s never been officially confirmed) to hide a bomb. The first person to notice and pick up the helmet is none other than Anakin Skywalker. Luckily, Windu was able to remember Boba’s connection to Jango and used the Force to pull Anakin away from the bomb. It’s yet another instance in which the Star Wars universe would have been much different if Boba had been successful that day.

Star Wars Holiday Special “The Story of the Faithful Wookiee” (1978) 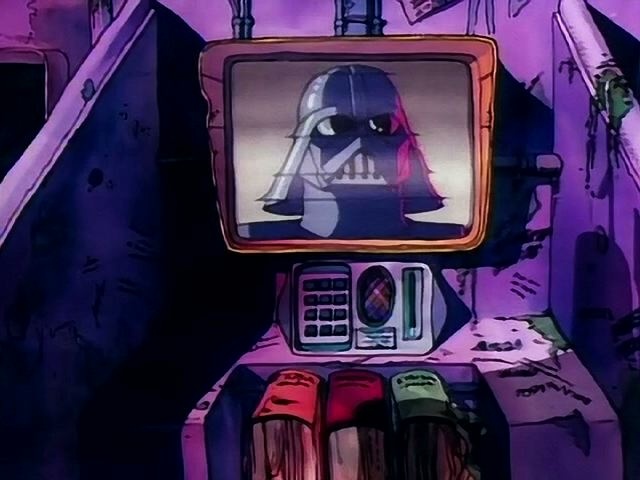 In the “Star Wars Holiday Special,” we see a small interaction between Darth Vader and Boba Fett. Fett video chats with Vader to tell him he successfully made contact with the Rebels, to which Vader replies, “I see why they call you the best bounty hunter in the galaxy.” This is high praise coming from Darth Vader, and it cements the fact that the rest of the galaxy views Fett as the best. This is also an important moment in the Legends timeline as it is Boba Fett’s first onscreen appearance and the first interaction with Darth Vader viewers had ever seen.

Star Wars Holiday Special "The Story of the Faithful Wookiee"
1978

The Assassination of Darth Vader (2013) 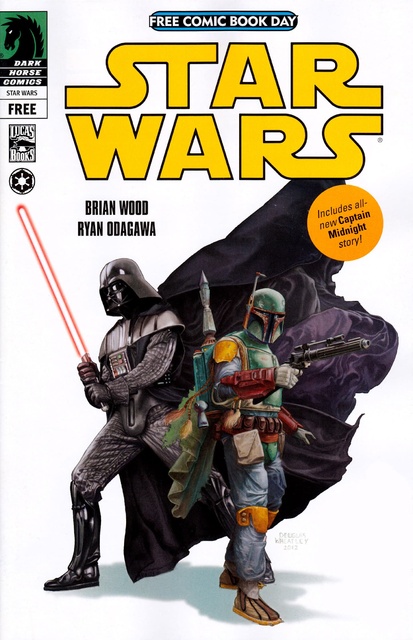 In the short Dark Horse one-shot comic from 2013, “The Assassination of Darth Vader,” Fett assists Vader in thwarting an assassination attempt by an Imperial officer. Fett flew around and blasted TIE Fighters in Slave 1 while Vader did most of the heavy lifting. Vader fought his way through the ranks of traitorous Stormtroopers and eventually reached the bridge to kill the officer responsible. Afterward, he opened a communication with Fett and informed him that his name would be put on Vader’s small “VIP” list.

The Assassination of Darth Vader
2013 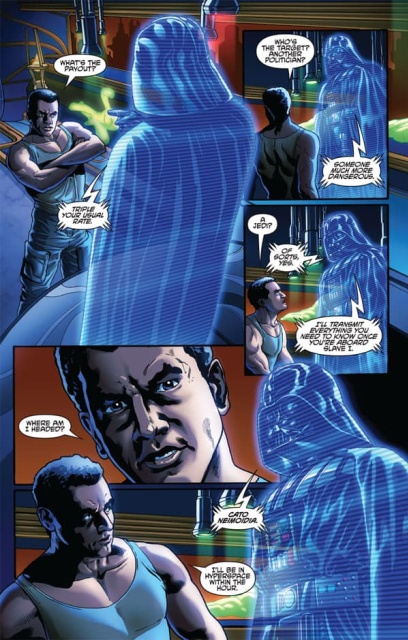 In the comic book “Star Wars: Force Unleashed II,” published by Dark Horse Comics in 2010, the hit video game was retold from the perspective of Boba Fett. Vader hires Fett to track down the clone of Galen Marek, codename Starkiller, who was Vader’s secret apprentice and personal assassin. Because “Starkiller” already had a head start, Vader suggests using Juno Eclipse, an Imperial defector who worked alongside the original Starkiller, to lure the Starkiller clone to Kamino. Fett agrees, but says that he needs a squad of Stormtroopers that wouldn’t be coming back. Instead, Vader supplied Fett with a squad of elite Terror Troopers. This shows that Vader trusted Fett enough to allow him access to high-grade Imperial equipment. After delivering Eclipse to Vader, Fett has a brief conversation with Vader about payment and his future with the Empire. After some bartering and a refusal to back down to Vader’s demands, the two come to an agreement that places Fett first on the Empire’s bounty hunter list. 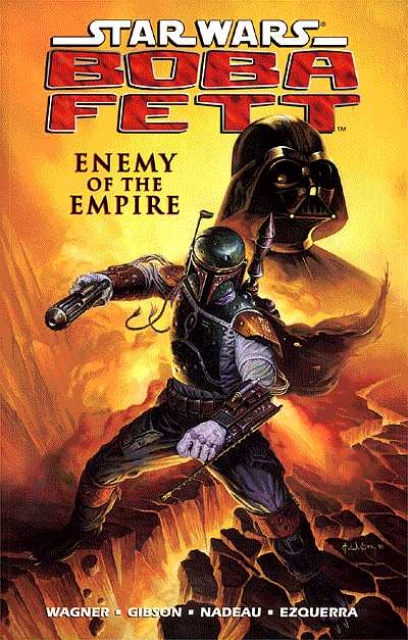 Fett and Vader also fought each other twice, with both fights ending in a draw. The first fight occurs in the 1999 Dark Horse comic mini-series “Boba Fett: Enemy of the Empire,” and is set primarily on the Outer Rim planet Maryx Minor. Fett had been hired by Vader to capture an Imperial Officer, as well as a box that he was seen carrying. But it wasn’t just any box; it contained the still-living head of Queen Selestrine of the Icarii, a sorceress with great regeneration capabilities and the ability to see into the future. Fett saw the allure of such knowledge and decided to, instead, keep the box and Selestrine’s head for himself. As a result, Vader tracked down Fett to duel for the box. After a lengthy fight, Vader cornered Fett at the edge of a cliff over lava. Seeing no way out, Fett kicked the box over the ledge. Vader threw Fett to the side and caught the box with the Force. Much like in “War of the Bounty Hunters #3,” Fett had the opportunity to kill a distracted Darth Vader. However, he decided not to do so and left the situation all together. Fett knew that there would be future job opportunities with Vader if he allowed him to live. 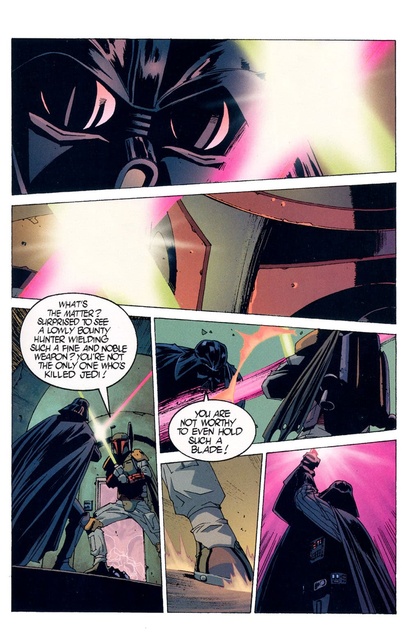 Fett and Vader’s second fight takes place in “Star Wars Tales #11,” a 2002 Dark Horse issue that is set on Tatooine. The bounty hunter and Sith Lord were both after the ever-elusive Han Solo, coming into conflict with each other while trying to apprehend him. Vader initially got the upper hand on Fett, but the fight balanced once Fett drew a green lightsaber and crossed blades with Vader. This came as a shock for Vader because not many owned lightsabers, nor knew how to use them effectively. In response, Fett remarked, “You’re not the only one who has killed Jedi.” Ultimately, Vader disarmed Fett and left the fight, but the moment shows that Fett has enough skill with a lightsaber to duel Darth Vader himself.

Boba Fett may not play a large role in the Skywalker Saga, but he still managed to mingle with Darth Vader and the Empire a number of times. Hopefully, we will see future stories of Boba Fett in his prime, working for the Empire again.