Will Boba Fett Be Developed Into An Anti-Hero? 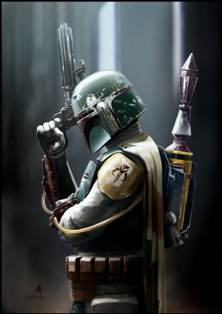 We were first introduced to Boba Fett in the Holiday Special, when he was portrayed as a spy for the Empire. Even after an overhaul and a more menacing and mysterious debut in Empire Strikes Back, he was still seen as a villain.

Similar to many other franchises, when a character becomes popular enough, there’s an internal push by creators to transform them into an anti-hero. This has been, arguably, the development of Boba Fett over the years. Just look at last year’s release of Angry Birds Star Wars as proof: before he appeared in the game, a lot of fan art poured onto the web.

The majority of this fan art illustrated Boba Fett as a bird, instead of a pig. It could be debated, the reason this happened is some fans subconsciously view the bounty hunter leaning more toward the good, than the dark side. This makes sense – since K.W. Jeter’s “The Bounty Hunter Wars” trilogy, Boba Fett has been painted as more of a decent guy who does bad things when paid. Although, he filled a more ruthless role in this book than in modern storylines.

This norm continues through a number of comics and novels. In Dark Horse Comics’ “Blood Ties,” he does right by his half-brother Connor Freeman, even though he should feel as much kinship with Freeman as he should with any other clone or their offspring. In Karen Traviss’ Legacy of the Force series, he even further is illustrated as being more than an emotionless killer.

Contrast these recent stories to his portrayal in early Marvel comics or Dark Horse’s “Dark Empire,” where instead of being surgical in his approach when hunting down his bounties, he is cut throat and willing to shoot down anyone or anything standing between him and his prey. It’s evident, he was written as more of a “true baddie” in these early projects than he is now.

In fact, he’s helped save the galaxy numerous times in relatively modern books – even training one of the Solo children to save the day, opening himself up to family bonds and working to better the lives of Mandalorians as their leader.

The fate of the Expanded Universe is up in the air, so if it’s dispatched of, will we be left with a more ruthless and cold Boba Fett, as hinted at in the Original Trilogy? Not quite. The push to sway Boba Fett away from being a villain is already been planted within the official canon, through his character development in The Clone Wars.

The writers could have written Boba Fett much more sinister in his initial Clone Wars story arc. He was, after all, out to avenge his father’s death and take down the Jedi. They could have made him a “child soldier,” who could shoot down an unarmed clone without blinking. A vengeful kid, whose only concern was the bounty being paid – laying a foundation to the Boba Fett we see in the films.

Instead though, they avoided any actions on young Boba Fett’s part that would make it difficult to redeem him as a good guy later on. He never killed in cold blood and demonstrated a moral compass that separated him from characters like Aurra Sing. When we see him in later seasons, he is working as a bounty hunter – but not carrying out assassinations. He’s specializing more as a mercenary than an assassin.

Since he never performs acts of atrocity, the creators are free to take Boba Fett in a more anti-hero direction in Star Wars Rebels, if they wish. Even in the original films, he technically does nothing that would warrant an ultimate death to fully redeem his actions.  Han Solo was not an innocent, so delivering him to Jabba the Hutt in Carbonite, could even be argued as nothing close to a truly evil act.

Will Disney decide to create a story that distinguishes Boba Fett as a bounty hunter to be feared, never hesitating to kill – but never ending the life of the unarmed or innocent? A bounty hunter who uses moral judgment, before accepting a job?

As a fan, what do you want to see – Boba Fett developed into an anti-hero or executed in the role of a villain?