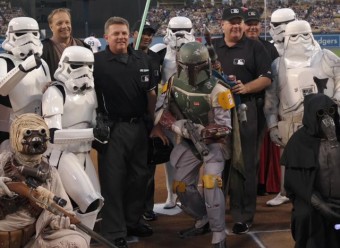 Despite poor reception in part of the stadium, dozens of people tweeted, shared Vines (no, not Red Vines), and Instagram’d.

The best photo came from the MLB, which had field access. Columnist Dan Wolh titled the shot, “Apparently Boba Fett and stormtroopers will be assisting umpiring crews now.”

Others snapped photos and videos on the very high-definition screens above the outfield, or from their seats from higher-up angles.

The pitch bounced twice before reaching the catcher, which is understandable when you’ve got a lot of armor.

No stranger to Star Wars night, Boba Fett appeared in poster and t-shirt form back in 2010.

Other cities have had Star Wars night. Has anyone spotted Boba Fett on the field, or throwing a first pitch?