Stunning Finale for "Agent of the Empire: Hard Targets"

We were brought full circle in “Agent of the Empire: Hard Targets” #5, finally learning what prompted the fight between Johan Cross and Boba Fett in the first issue.

In the previous issue, Cross and Candra Tymon rescued Bron Dooku, but their escape was interrupted by the arrival of Boba Fett – who was hired to bring in the young heir. The standoff is quickly joined by Lord Borgin’s forces, which receive immediate fire by Boba Fett.

Cross contributes firepower to Fett’s attack on Borgin’s men, giving Tymon and Bron opportunity to escape. Chief Jorrick and his men are gunned down, leaving the bounty hunter and imperial agent standing. It’s realized the first few panels from “Hard Targets” #1 are pulled from this faceoff. 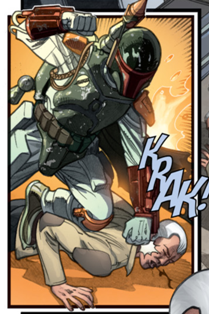 What I found even more interesting was Boba Fett’s aside that he and Cross had battled before, and Fett had won. Is this a hint from writer John Ostrander that the two characters share a past, which we may get to see in future stories? Perhaps they’ve even worked side-by-side – Fett often being hired by the Empire, and Cross being an agent of the Empire?

The fight cumulates with Boba Fett’s firing an ion missile, which hits the Tymon and Bron’s escape vehicle – resulting in an explosion, destroying the ship. Boba Fett is baffled; the ion missile should have only shut down the engine, not creating a high explosion.

Cross presses Boba Fett for an explanation as to why he would kill the target he was paid to capture alive. Boba Fett pushes back just as hard, reasoning that he could not have been responsible for the explosion. They come to the epiphany that Boba Fett was set up to take the fall – his employer would benefit from the boy’s death.

As far as Fett’s concerned, this is the second time in weeks he’s been set up for a murder that benefited Lord Borgin – the man who hired him – or was it? Last issue, Boba Fett said once he discovered the individual who set him up, he’d deal with them. Now is time for reckoning.

When we next see Cross, he is waiting for Borgin in the politician’s study. What we find out could possibly be the most complicated and surprising endgame I’ve ever read in a Star Wars comic.

Boba Fett was not hired by Borgin, but by Cross, through a third party. Fett was led to believe he was being hired by Borgin, to bring him Bron to give him political leverage. Cross discloses to Borgin that he planned to be confronted by Fett once rescuing Bron, and Tymon willingly sacrificed herself in the explosion that she set off herself.

Bron was taken into safekeeping until he comes to age. Borgin is ecstatic that Cross is on his side, but then becomes wary when the agent reveals that the entire operation was not to benefit Borgin, but to make Boba Fett believe the lord had set him up – marking him for death.

The Empire made Orom Malvern, the brother-in-law of Borgin, the new count, because he is not as politically hungry and easily malleable to do the Empire’s will.

Echoing panels from the first issue, Borgin is shot dead from sniper fire through the window. Cross’ plan worked perfectly, although he knows if Boba Fett were to ever figure out the ruse, he will also be killed. However, in his line of work, by the time the bounty hunter learns the truth, when Bron surfaces as an adult, he most likely will already be dead.

This story arc ended with great payoff and left me stunned. Some of the best writing coming out of Dark Horse is in the pages of “Agent of the Empire.”