Has Boba Fett Caught His Prey In "Star Wars" #8?

In “Star Wars” #8 we finally get more than just a handful of panels dealing with the subplot of Han Solo on the run from Boba Fett and Bossk. The chase began in issue #2 and we’ve been building to a hopeful conflict – which writer Brian Wood delivers in this action packed issue. 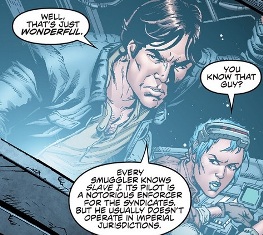 While Luke Skywalker and Wedge sneak aboard a Star Destroyer, the real action takes place on Coruscant. We are treated to a massive dogfight, that highlights the cunning evasive skills of Chewbacca and Han Solo – as well as showcases the hunting skills of Boba Fett.

When we last left Han Solo and Chewbacca, they had hired garbage-barge pilot, Perla, to aid them in an escape from bounty hunters Boba Fett and Bossk, who tracked them to Coruscant. The smugglers are forced to split up as Slave I engages them – navigating the Falcon as Han Solo and Perla remain aboard the barge.

The tactic worked, as Boba Fett hadn’t planned on a firefight above the Imperial Center. With Chewbacca’s counterattacks on the Slave I, Fett is forced to allow the Garbage-barge to gain distance – the risk of killing Solo in the dogfight is too high, and he attends to capture him alive to collect on the dual bounty, one from the Hutt Cartel and the other the Empire.

Han Solo tells Perla he is surprised to see the bounty hunter in an Imperial Jurisdiction. Unfortunately for Perla and Solo, the space battle put them on the Imperial security radar, blowing their cover in the process. Once catching up, the Slave I continue to attack the garbage-barge, but aims for its cargo, resulting in Perla to lose large portions of her cargo and jeopardizing their ability to maneuver.

Meanwhile, Bossk chases down Chewbacca in the Falcon. The bounty is on Solo’s head, so Bossk is intent on destroying both, the Falcon and Chewbacca.

Han Solo crashes the barge into the Imperial Center. He believes it’s a calculated risk, which will payoff in their escape, but the plan comes up short as Slave I hones in one the smuggler and Perla, with them outgunned and without a ship on the ground floor of the Imperial Center. 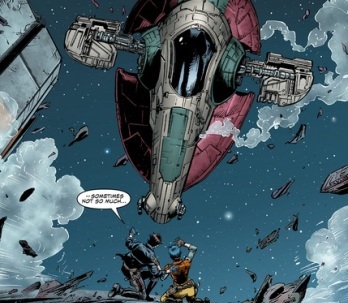 There are several items of note in this issue: first, Wood emphasizes that it’s unusual for Boba Fett to engage his prey in Imperial borders. This must be foreshadowing for the next issue, why are these areas off limits to Boba Fett? Could his saving grace be Imperial Security Forces stepping in right as Slave I closes in on the marooned Perla and Solo?

Ryan Kelly’s art goes above and beyond in this issue. The most haunting image, in my opinion, are the skulls and bodily remains decorating Bossk’s cockpit seat.

We’ve still yet to be told how Boba Fett and Bossk became a team in this issue. Or are they building on the rebooted relationship between the two, which has already been expanded upon in The Clone Wars?

The confrontation will continue in “Star Wars” #9 will be released on Sept. 11.