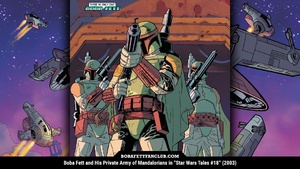 See https://bobafett.com/bounty/books/comics/tales_18/ for more info on the comic with four "legendary" short stories

Three "holy grail" Kenner prototypes, the original Prototype costume blaster, and much more were on display at Rancho Obi-Wan's "#BobaFett to Bo-Katan: The Evolution of the Mandalorians Exhibit" at #StarWars Celebration 2022 last month.

You can also become a member of Rancho Obi-Wan and you can take a tour of their incredible museum in Petaluma, California.

Not shown here, but the final display was a heartfelt memorial to Jeremy Bulloch, the late actor who originally played Boba Fett in "The Empire Strikes Back" and "Return of the Jedi." They also had the stunt "Return of the Jedi" jetpack on display, used for the shots of him crashing into the barge (by stuntmen Glenn Randall Jr. and/or Dickey Beer).

Fun fact: Rancho told us that our website's Boba Fett collectible database has come in handy from time to time for them, which is awesome. Check it out: https://bobafett.com/bounty/ 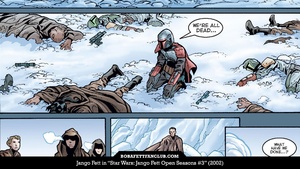 #JangoFett's backstory had some sad moments that changed his life, like being the sole survivor of the True Mandalorians shown here in the "legends" comic published on this day in 2002, Star Wars: Jango Fett Open Seasons #3

The original publication from Dark Horse Comics was touched up with fresh color in the Marvel re-prints, most recently gathered up in the 2018 trade paperback as noted on BFFC: https://bobafett.club/37qk1 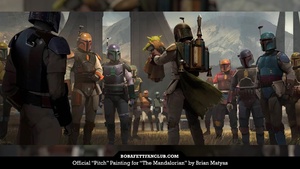 Earlier this month, the artist shared that Dave Filoni needed a "sketch of a small Yoda creature being presented to a group of Mandalorians."

Due to the quick turn-around, Brian used Daz 3D for composition and then his Hot Toys 1/4 scale #BobaFett as a base to paint on top. Doug Chiang was also involved early in the process. 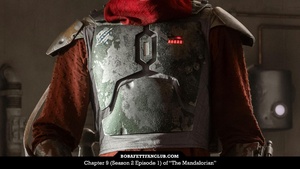 "Pitted and pocked, as if with some kind of acid. ... The Mandalorians knew how to make armor, didn't they. ... 'Been through hell and back.'"

For more about the books, stop by BFFC: https://bobafett.com/bounty/books/ 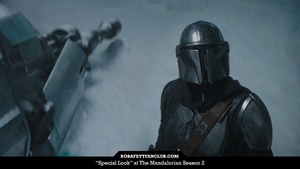 "If I can locate other Mandalorians, they can guide me."

What did you think of the "Special Look" at Season 2 of #TheMandalorian? Watch it again here: https://youtu.be/ICuqzhViWAI

"Iconic Mandalorians: 1978-2020" is a new infographic by Wyatt Edwards and Cody Petersen

See the entire infographic all at once on HalloweenCostumes' website: https://bobafett.club/mgt12 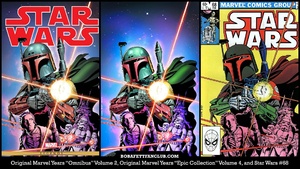 With a cover based on vintage artwork by Gene Day, #StarWars Legends Epic Collection: The Original Marvel Years Volume 4 (center; released one year ago on this day) collected vintage Star Wars comics #56-73 (plus some additional issues), a span which includes #BobaFett and other original Mandalorians like Tobbi Dala and Fenn Shysa in Star Wars #68 (right; original Gene Day cover).

You can get the version in the middle for 30% off on Amazon: https://bobafett.club/eoymh

Earlier in 2015, the Star Wars: The Original Marvel Years Omnibus Volume 2 (left) featured a larger scale and hardcover version of the same thing as the "Epic Collection." 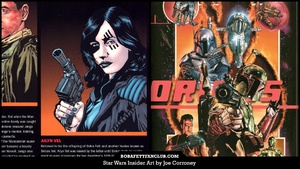 Part of the "History of the Mandalorians" article by Abel G. Pena for their 80th issue back in January 2005 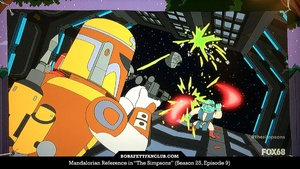 On this day in 2013, #TheSimpsons' episode entitled "Steal This Episode" (Season 25, Episode 539) featured Mandalorians and a Yoda-like character 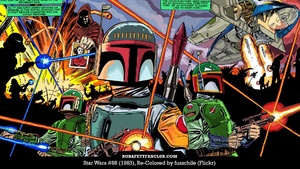 Original story by David Michelinie, pencil art by Gene Day, ink by Tom Palmer, and lettering by Joe Rosen, but re-colored for fun by fuzzchile (Flickr) 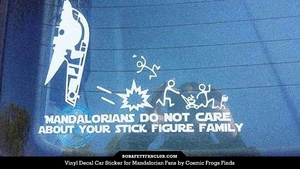 "#Mandalorians do not care about your stick figure family." 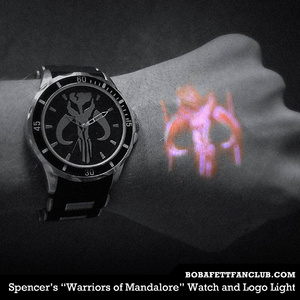 #WearItWednesday: Spencer's "Warriors of Mandalore" bullet band watch came out last year, but it's still in stock on their site for $25 at http://bit.ly/2bzxROm. 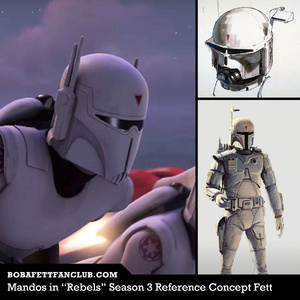 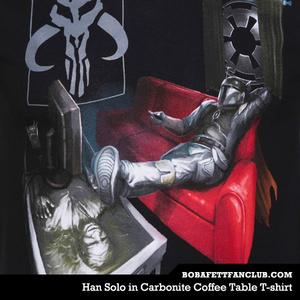 #WearItWednesday: If you're a #BobaFett fan, what's a "man cave" called? Mandalorian Cave, complete with a #HanSolo in Carbonite coffee table.

This officially licensed t-shirt is up on 80sTees and also eBay (store, not auction): http://j.mp/1UmEf8S 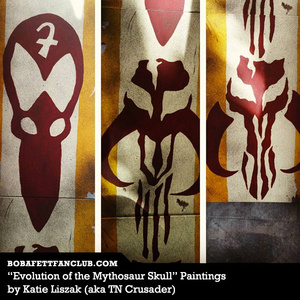 #MandalorianMonday: "Evolution of the Mythosaur Skull" paintings by Katie Liszak (@TN_Crusader). These are available from the artist -- who is an official Mandalorian Merc -- as a set of three acrylics for $145 or best offer via Instagram: https://instagram.com/tn_crusader/ 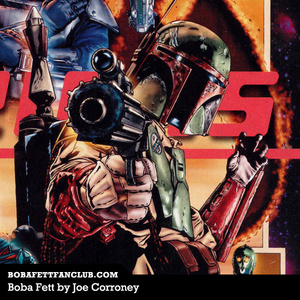 Artwork of #BobaFett by Joe Corroney. This piece was done for a 10-page article entitled "The History of the Mandalorians" by Abel G. Pena in #StarWars Insider #80 (2005). For more featured Fett and Mando artwork by Joe Corroney, check out http://bobafett.com/multimedia/galleries/thumbnails.php?album=72

Also, as legend has it, this article was inspiration for the Mandalorian Mercs Costume Club deciding upon its name. 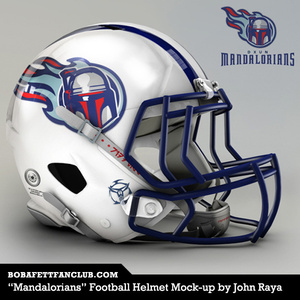 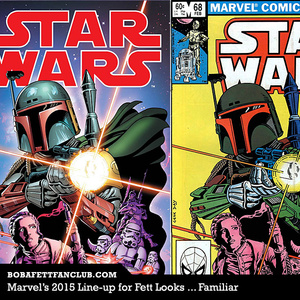 This first move for present-day Marvel working with Fett is actually something we've already seen before. It's a re-do of their Star Wars #68 comic from 1983. In fact, this isn't even Boba Fett; it's Tobbi Dala and Fenn Shysa (two Mandalorians) who make an appearance. 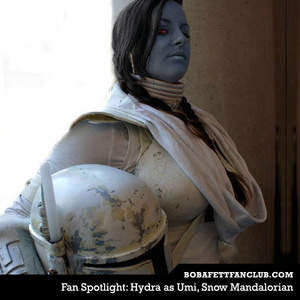 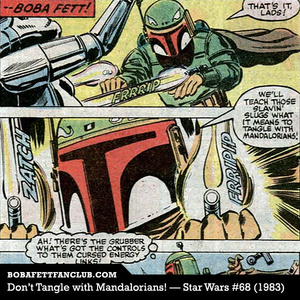