I finally got the chance to sit down, plug in and listen to Smuggler’s Gambit – an audio drama performed live at Celebration VI on Aug. 22.

The story pulls you back to the era of the original trilogy. Han Solo and Chewbacca are assigned with finding a new base for the Rebel Alliance, but when Solo and Chewie runs into an old acquaintance that aims to claim Jabba’s bounty, they fear being hunted could complicate things for the rebellion.

Han Solo and his Wookiee companion record a message for Luke Skywalker then sneak away, planning to return to their former line of work. Trouble soon follows them, when Solo is captured by an aspiring smuggler named Ro Kurota and held for auction to the highest bidder – including representatives from The Black Sun and Jabba’s Palace.

This original script is penned by Kyle Newman of Fanboys and F.J. DeSanto. The tantalizing script, paired with more than 100 sound effects engineered by Jimmy “Mac” McInerney of ForceCast.net make for a fun adventure in the same spirit of the original films. 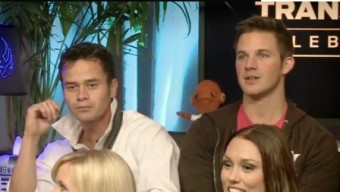 On an edition of Star Wars Transmissions, host Christ Gore interviews Newman, who sits on stage with the entire cast of Smuggler’s Gambit. Newman said he was shocked at the reception of their project. He aimed to provide fun entertainment for fans, but never expected the people to embrace the audio play with such rigor.

With the help of Dave Filoni, supervising director for The Clone Wars, Newman was able to secure a lot of The Clone Wars cast for the performance. According to Newman, the cast only had about a half hour between receiving the scripts and going on stage – illustrating the chemistry they’ve built and their performance power. 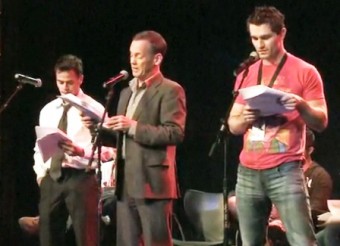 When asked if further audio adventures are on the horizon, Newman throws the question to the cast – who all smile, raise their hands and cast their votes in favor for more. So, we should expect more of these in the future, possibly at the next Celebration.

When a hefty bounty is in play, you can expect Boba Fett to make an appearance. Daniel Logan once again performs the role of our favorite bounty hunter. Logan has played the part of a young Boba Fett in the prequel trilogy and in The Clone Wars. This is our first time experiencing the actor performing an older version of his character.

Logan’s voice work is on key, but not overused – supplying logic and calmness in a scene where the characters are running high on emotion and caught up in personal rivalries.

I’ll save the spoilers, but recommend giving a listen to the full audio, which runs about 35 minutes.