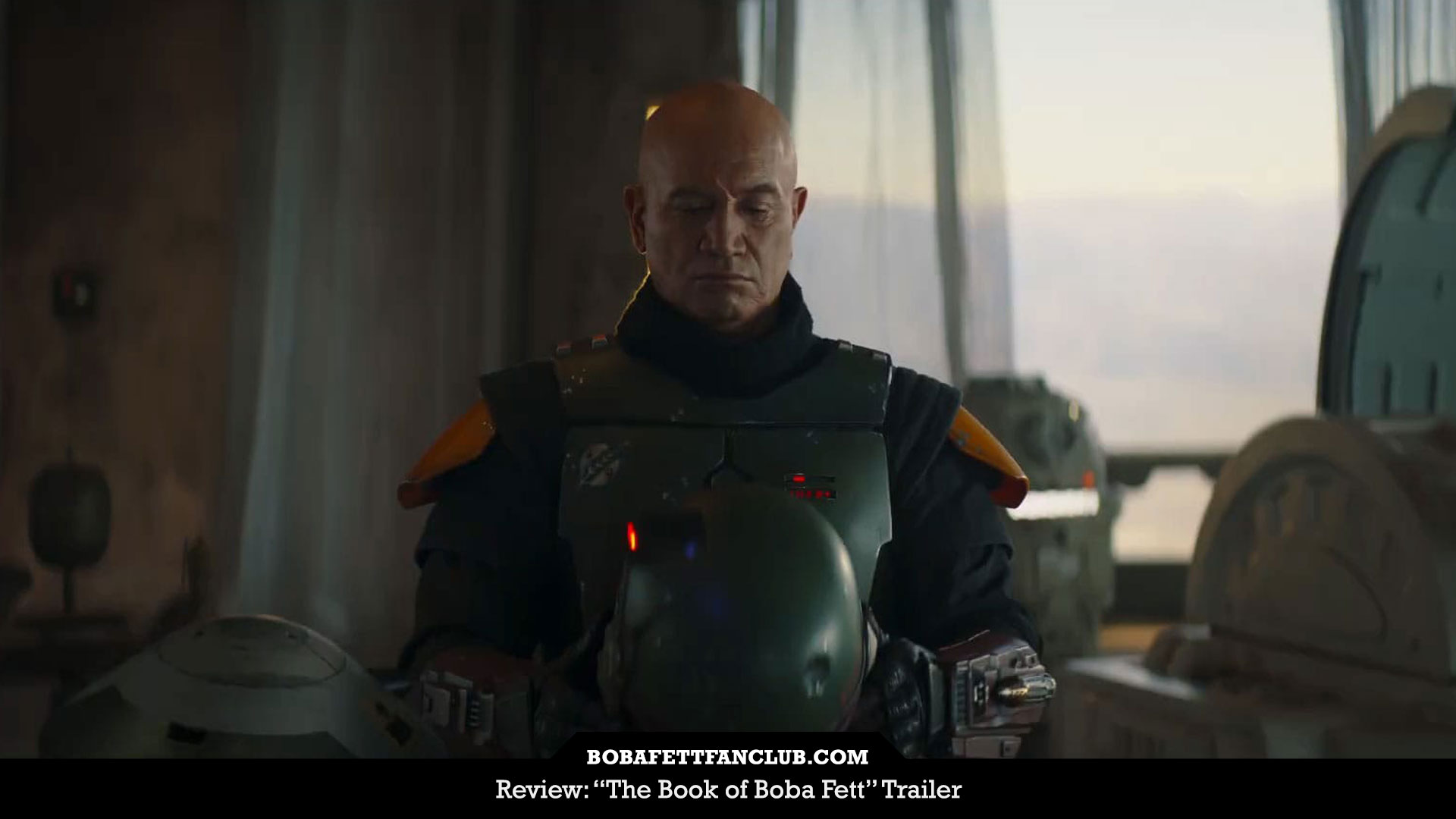 The first trailer for “The Book of Boba Fett” is finally here! This is something we Fett fans have been waiting for what feels like forever and it definitely did not disappoint. If you have not already seen it, I highly recommend checking it out before continuing this article as this will contain spoilers and will most likely require context only the trailer will provide. Nobody will stop you from watching it two or three times afterwards either!

Without further ado, here is my analysis of the new “Book of Boba Fett” trailer. 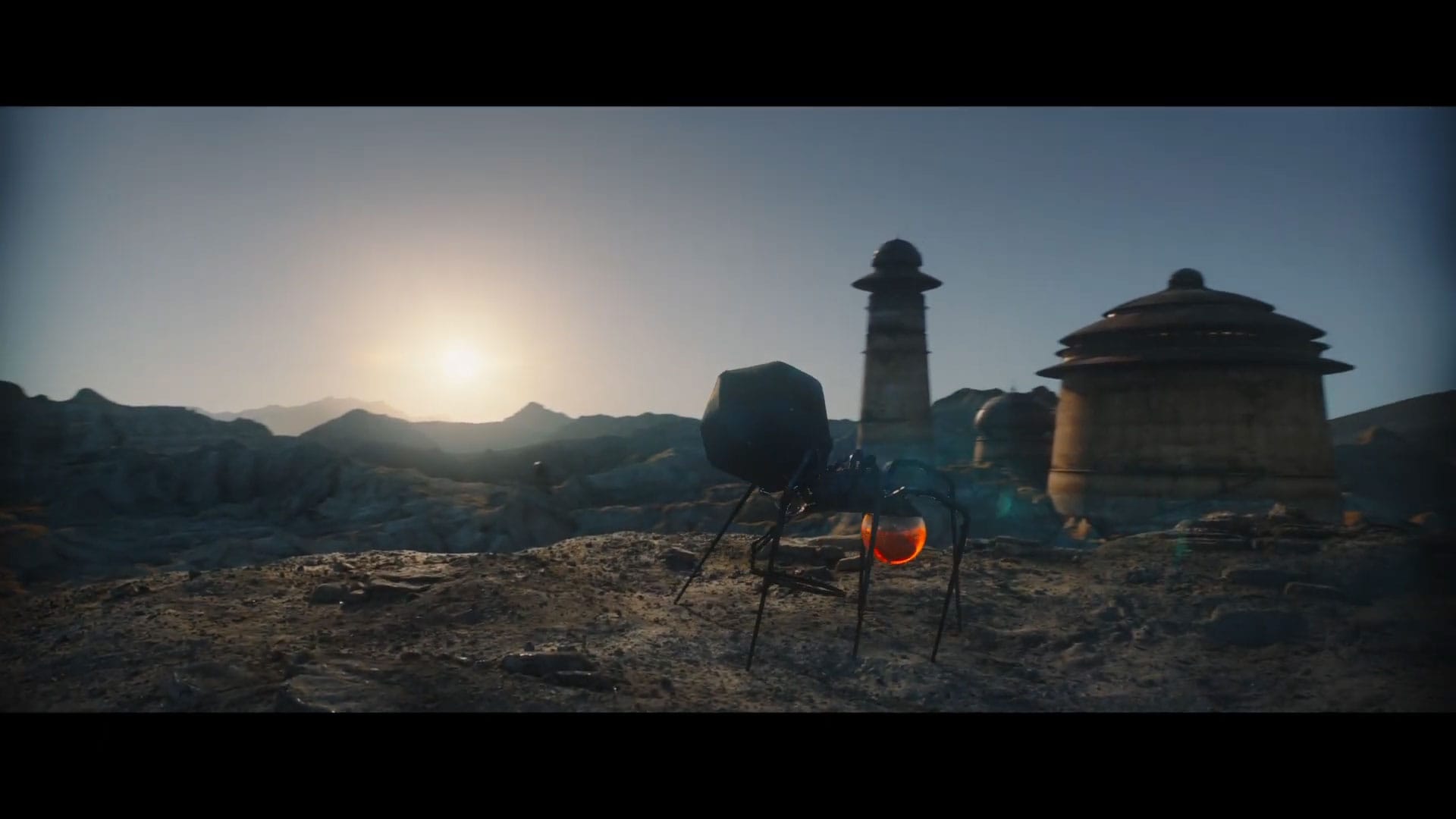 The first thing you see in the trailer is a B’omarr Monk spider walker. You may recognize them from the opening of Return of the Jedi when C-3PO and R2-D2 first entered Jabba’s Palace. These walkers house the brains of B’omarr Monks who had their brains removed so they could enhance the power of their minds without the distraction of a body. Jabba’s Palace originally belonged to them before the gangster moved in. Jabba let them stay because he liked how they looked. With Boba Fett setting up shop in the Palace, I wonder what his stance is on them. Perhaps he will let them stay much like Jabba did. 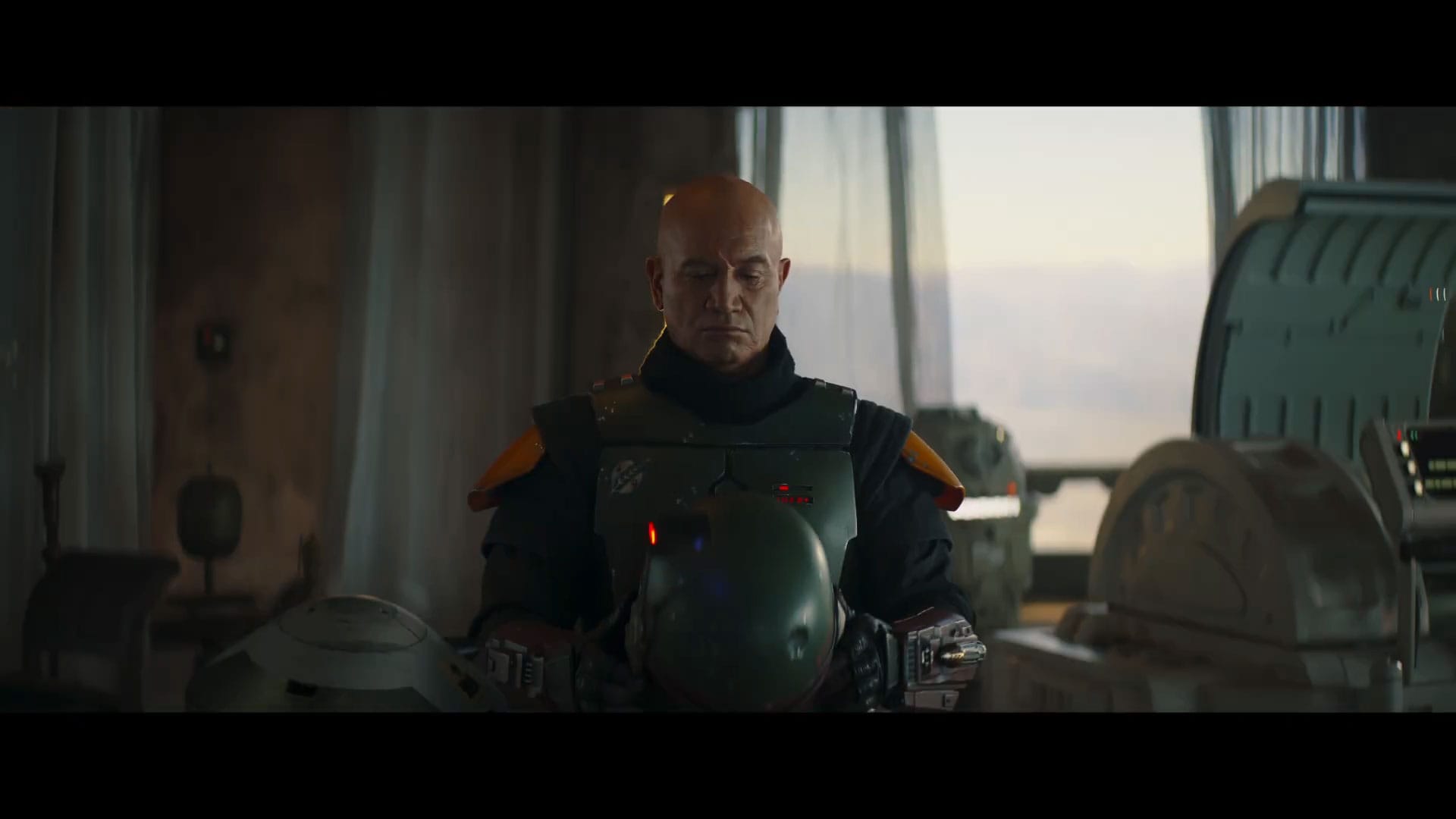 Throughout the trailer you see many shots of Boba Fett himself. If you look closely you can see that his armor has undergone some changes since the last time we saw him. He has traded in his robe undergarment for a more tunic look and he has a Kama like garment around his legs. For those who don’t know, a Kama is the name used for the “skirt” that Clone ARC Troopers wear and that some more traditional Mandalorians wore in Legends. Looking at some of his smaller pieces of attire, you can see that his belt has undergone some changes as well. It has lost some pouches and gained what appears to be bullets of some kind. Similar to those worn by The Mandalorian. Moving on to his face, you can see that he looks less pale, has eyebrows, and many of his scars are gone. This is probably due to some much-needed time in a Bacta chamber. Possibly that “tanning bed” looking device shown in the beginning of the trailer. 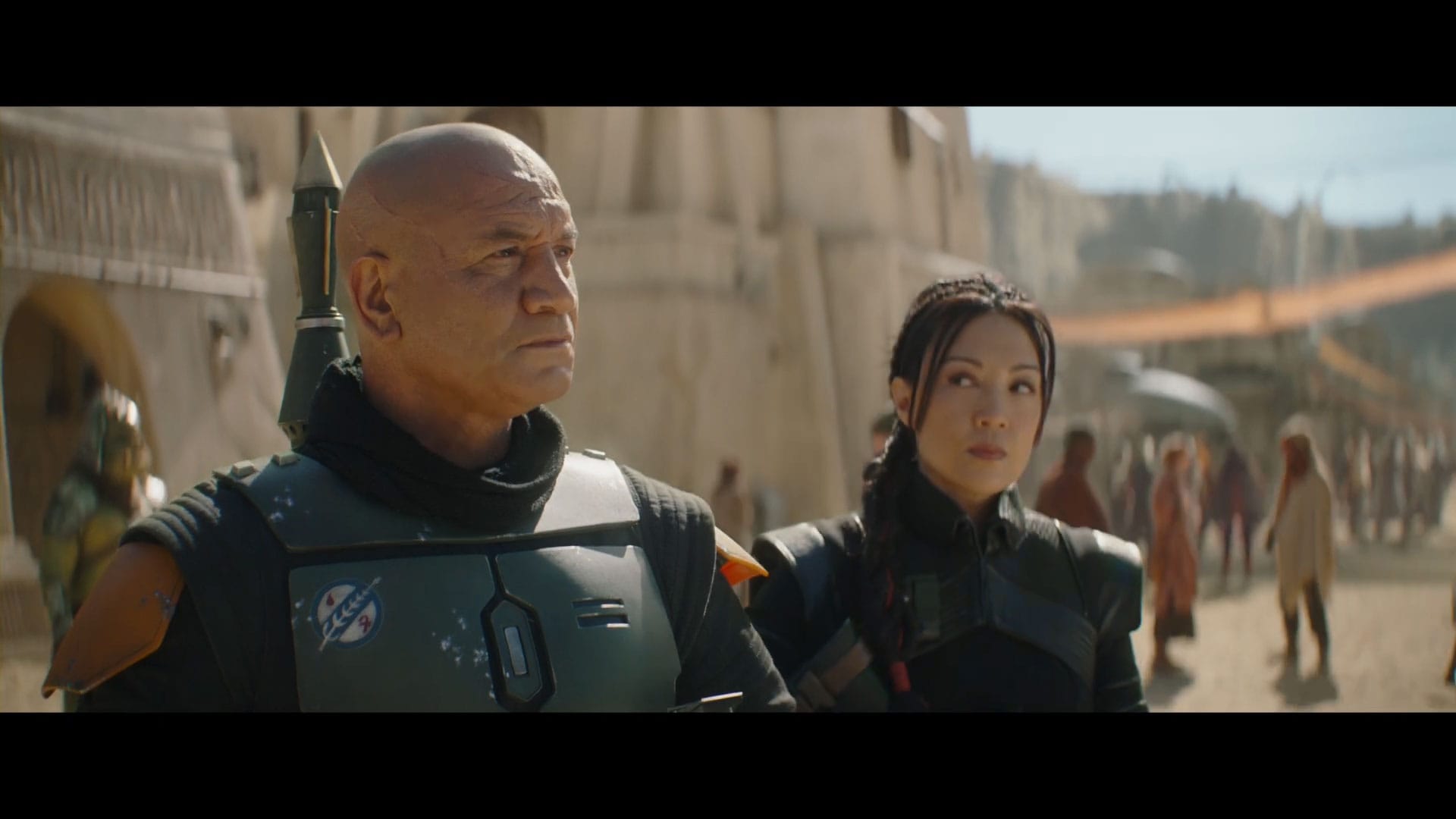 “Jabba ruled with fear. I intend to rule with respect.”

This is a very important statement for this show. It not only shows that Boba has a different perspective of leading compared to Jabba but it also sets the stage for what this show will be about. Boba has spent enough time in Jabba’s Palace to see how Jabba deals with the people that work for him and how it causes them to act. Jabba stayed in power for so long because he paid the bills for so many of his workers and had the Hutt Clans to back him up. However, if given the chance, many of his thugs would have turned on Jabba and took control for themselves. Boba recognizes this and has chosen to lead through mutual respect. This will help him in the long run by keeping his captains loyal and not having to worry about them turning on him. Of course, we all know Boba Fett doesn’t have to worry about threats from anyone. 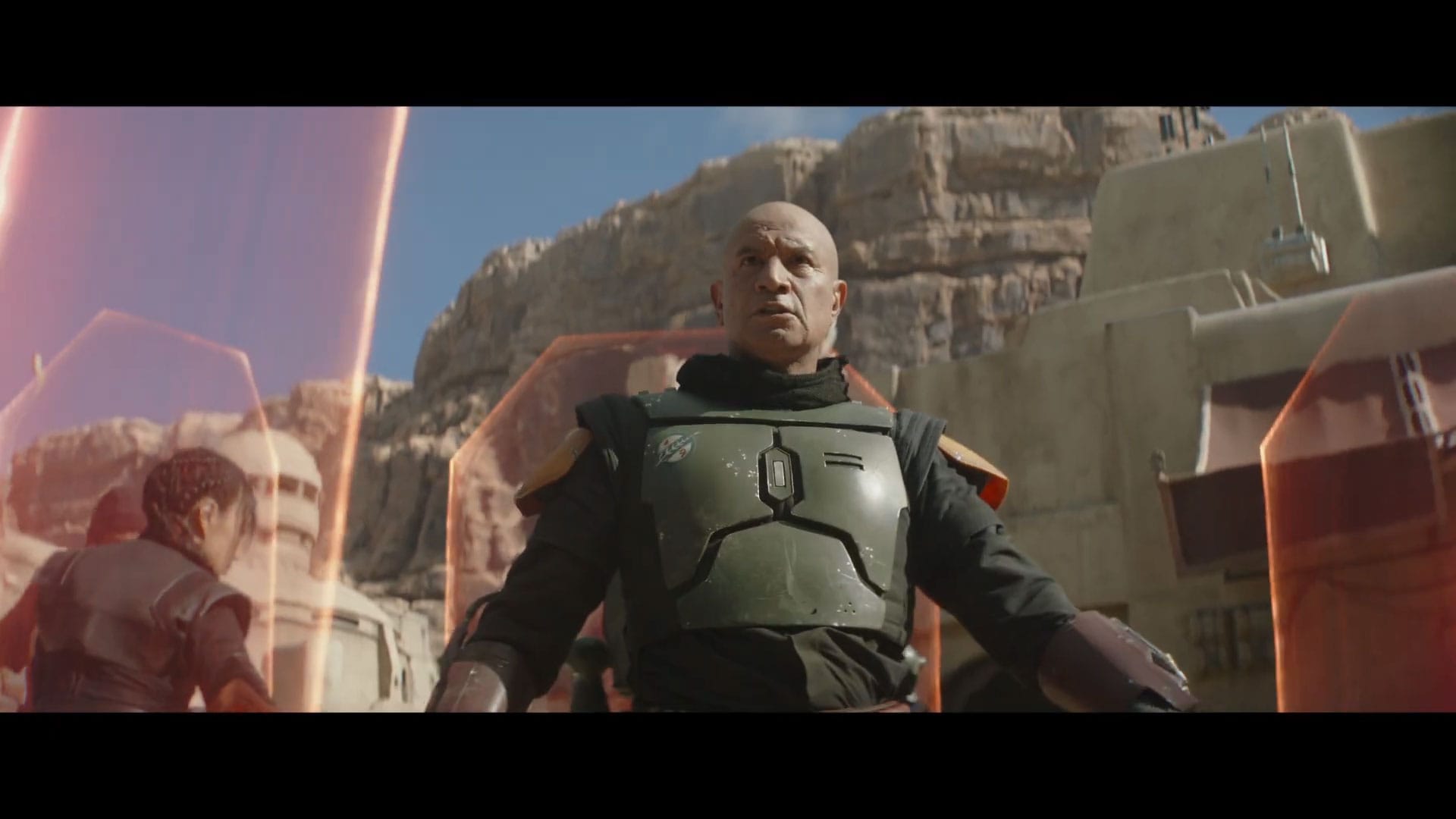 It is unknown if other planets besides Tatooine will be visited in this show. In this trailer, we only see sandy environments that have the same aesthetic as Tatooine. However, we do get a look at a new city that looks to be on Tatooine. This city looks to be governed by an Ithorian. The other location we see in the trailer is Jabba’s Palace, now owned by Boba Fett. Judging by the aesthetics, I can conclude that we were only shown shots from one or two episodes of this show. Unless these are the only locations we will see in this show, of course. The scenes with Boba and Fennec fighting the men with shields, Boba walking through a door way, the Ithorian scenes, and a few others all appear the be in the same location. This could mean that these events all happen at around the same time. The same goes with Boba Fett addressing Jabba’s captains and the final shot of Boba sitting on his throne. Seeing how Fett has his helmet off and on in those scenes, I can assume that the words spoken over those scenes may be misplaced. Regardless, I think we have only seen a small portion of what this show has to offer us. 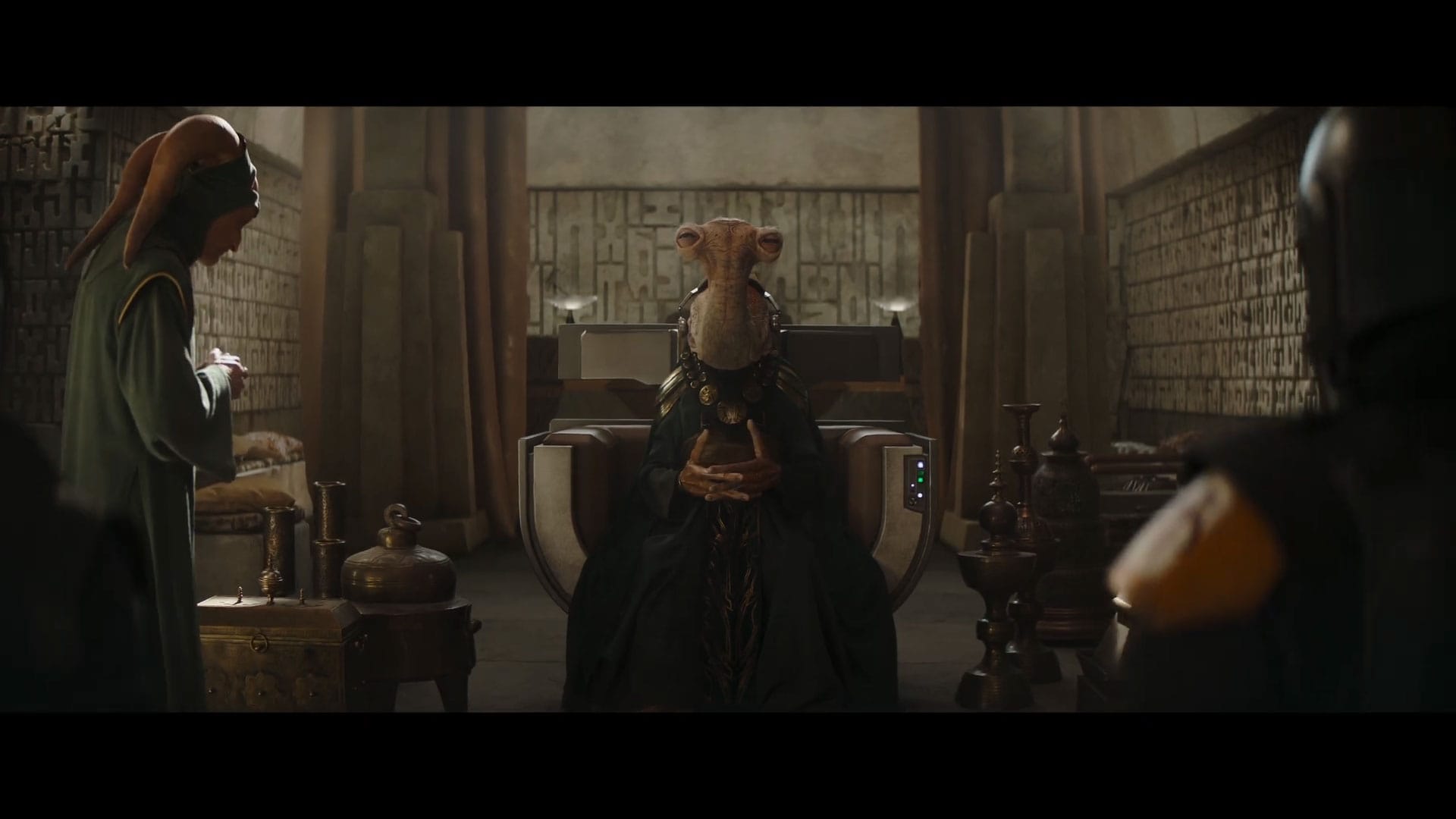 Speaking of the Ithorian, we were treated with a good amount of alien characters that made appearances in the Original Trilogy. The Ithorian appears to be some sort of figure head in this new city. Whether he is a gangster like Jabba or a simple governor is unknown. Two Twi-leks were shown in this trailer as well. I first assumed they were a part of Jabba’s entertainers but after examining their surroundings, they appear to be in this new city. They may be prominent figures in this city or they could even be part of a crime syndicate. Possibly Crimson Dawn? They are known to welcome many different species into their group and they all seem to dress nicely. It would make sense for them to make a move after Jabba left such a void in the Underworld. The next set of aliens are what remains of Jabba’s captains. It looks like there are several Trandoshans to the left of Boba Fett. Their designs look so much better than the Trandoshans in The Mandalorian. They are very detailed and make me wonder what Bossk would look like if he is in this show. It would be interesting if that first Trandoshan at the table is Cradossk, Bossk’s father, who is a notable member of the Bounty Hunters Guild. You can also see Aqualish and Klatooinian captains. Last but not least, the Tusken Raiders. They don’t have much screen time in this trailer but I predict they will have an important role in this show. When Boba escaped the Sarlacc, something caused him to dump his armor and acquire Tusken Raider equipment. I think these Tuskens rescue Fett and remove his armor. They don’t like technology so it would make sense for them to leave it behind. It would also make sense for Boba to have Tusken Raider equipment and a black robe which looks similar to what the Tusken Raiders are wearing. 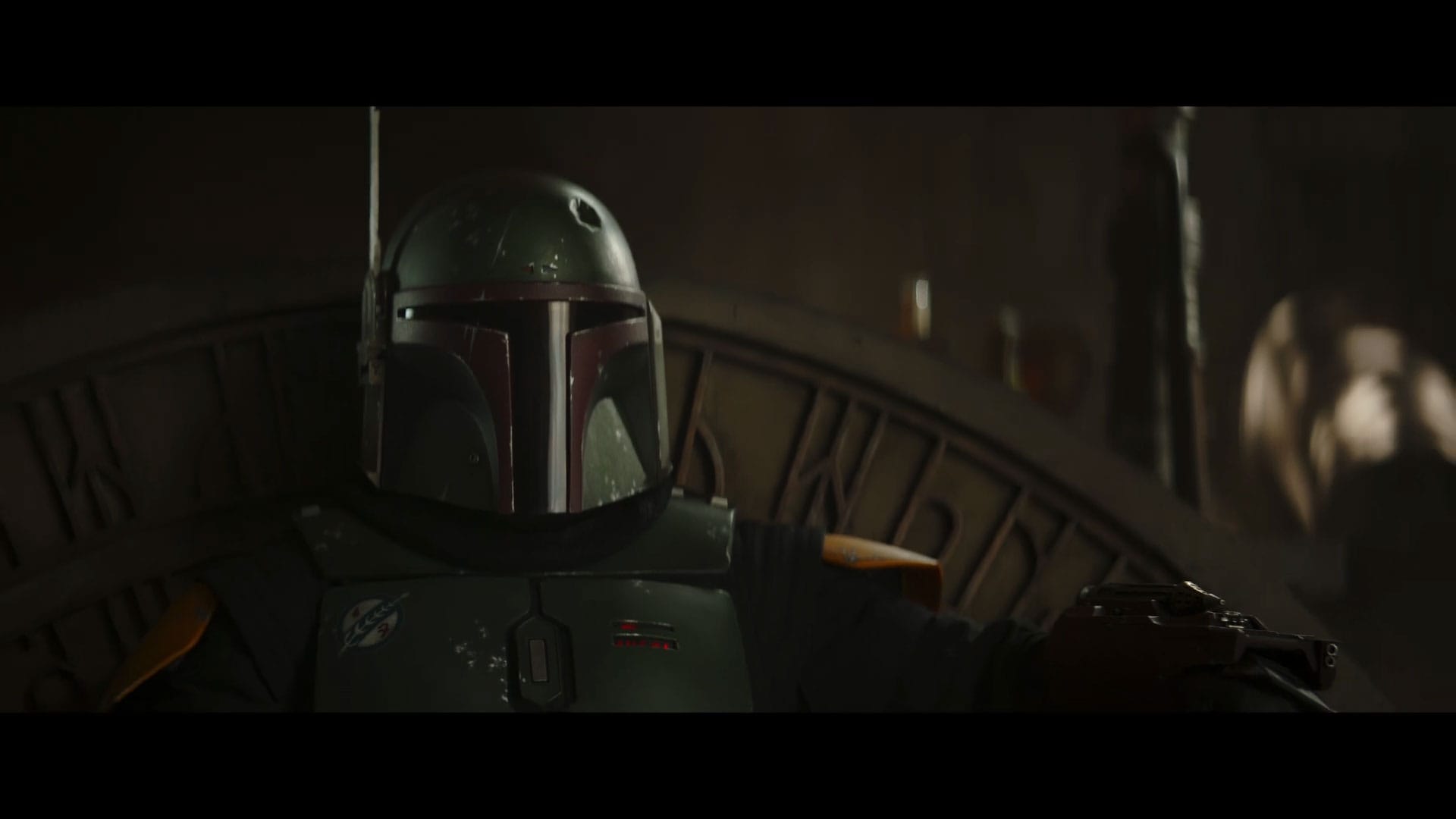 These are the high points in the trailer that stuck out the most to me. I wait eagerly to see how many of my theories come true. It feels like it is taking forever but we are in the final stretch to the release of “The Book of Boba Fett.” Just around two months are between us and Boba Fett’s long overdue show. I know that I am extremely excited to finally see Boba Fett as the main character and kicking butt like he always does.