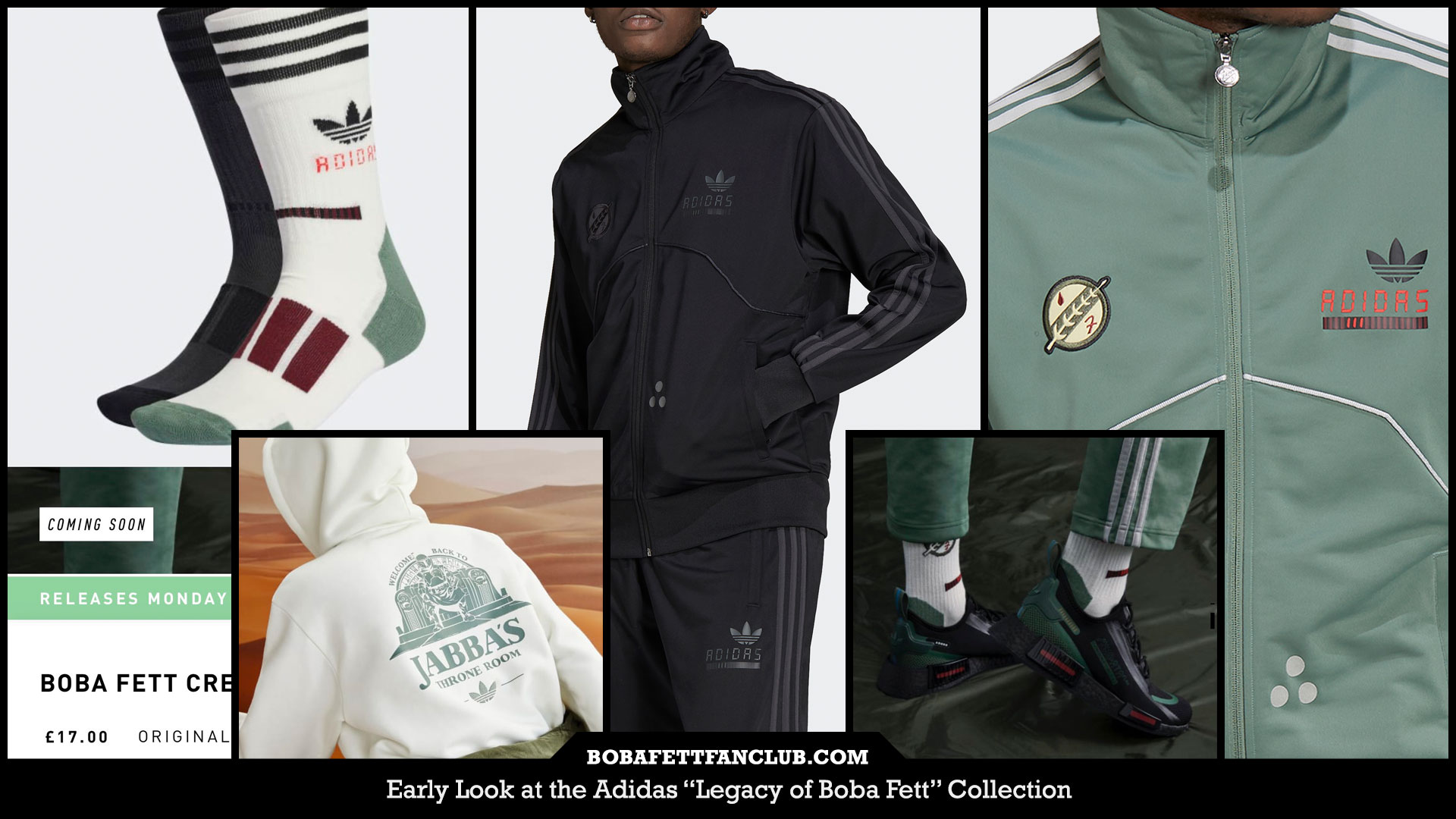 Early Look at the Adidas "Legacy of Boba Fett" Collection

Adidas has yet to make a big announcement, but if you know where to look on their app and site, a new “Legacy of Boba Fett” collection appears to be coming next week:

* Possible alternate time noted after BFFC fan trimport8276s_stuff contacted Adidas and learned the overall drop times on the website are wrong. Can’t rely on Adidas to be correct. Also, the U.S. site now lists time zones which is an improvement. The U.K. site lists an even different time now.

Earlier this week, we shared on Twitter that the Adidas U.K. site had new official Boba Fett crew socks listed for £17 GBP as coming soon, mentioning this new “Legacy of Boba Fett” collection. The imagery also included new shoes, but without additional info. All of this was listed as “Member’s Only,” which to them means a free account on their website. Soon after we shared the news, the link stopped working.

Adidas UK shows new official #BobaFett socks as coming soon. Part of their “Legacy of Boba Fett” collection. The pics also show some new shoes. The listing notes Member’s Only, too. See for yourself: https://t.co/vv0aOFIVC3 ? pic.twitter.com/uheTIr2Iyt

Normally we’d stop there and not signal boost any more, but because it’s on their official site and app, it’s not a leak and anything up accidentally can be screenshot of course.

Fast forward to this morning and hidden on the Adidas U.S. website right now is some The Book of Boba Fett “Jabba’s Throne Room” merch. We shared one of two videos on Twitter, embedded below. While it notes it’s “out of stock,” that’s just placeholder since it hasn’t gone up for sale yet.

Part of their "Legacy of Boba Fett" collection which we shared earlier, before they took those pages offline. pic.twitter.com/Y84ffYbYel

Meanwhile, we learned Adidas is currently doing a Boba Fett raffle in collaboration with Hasbro, giving away one of the Black Series “Return of the Jedi” figures that already is out. They ask four Boba Fett questions to get you into the mix. The link only works on mobile via the official Adidas app. (To find the raffle, load up the official Adidas mobile app, click on the bottom right “radar,” and scroll to “exclusive giveaways.” It might not be available in all regions.)

#Adidas is also doing a #BobaFett raffle in collaboration with #Hasbro, giving away one of the Black Series "Return of the Jedi" figures that already is out. They ask four Boba Fett questions to get you into the mix. The link only works on mobile, via their app in "My Events." pic.twitter.com/wYnhi70IMO

There might be more to come, but nice to track down a little bit of what’s coming soon.

The U.S. site just shows the tracksuit bottoms, not the tops. They also have some Jabba’s Throne Room items.

The U.K. site has everything. Some fans in Germany already have their orders shipped and in hand.

Adidas put out a promo video for the collection.

Adidas put together a "Legacy of Boba Fett" promo video, shown here. "An epic character deserves an incredible story, and this Star Wars™ collection brings Boba Fett’s legacy to life in all its galactic glory." pic.twitter.com/cms9fNixh1