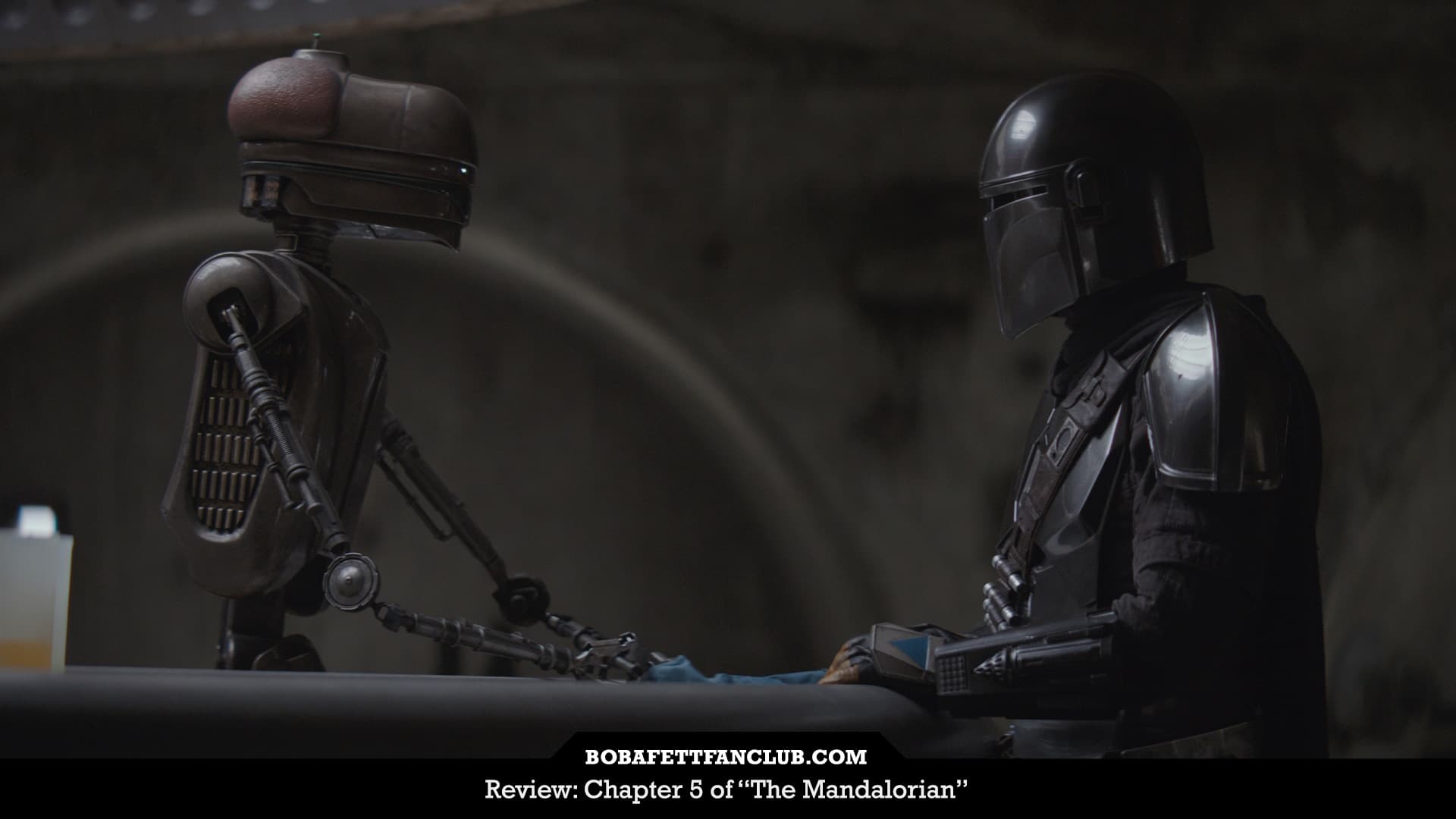 Review: Chapter 5 of "The Mandalorian"

Published December 9, 2019 • Written by The IronWolf • Categorized in Film & TV

Chapter 5 of “The Mandalorian,” titled “The Gunslinger,” is a short and nostalgic adventure in this first season, ranging from seeing familiar ships and droids to characters and locations.

The episode opens up with a space battle. A mercenary named Riot Mar is firing on The Mandalorian’s ship in what appears to be a modified Z-95 Headhunter. I love seeing things from “The Clone Wars” being brought back into other Star Wars projects. The Mercenary tells The Mando, “I can bring you in warm, or I can bring you in cold,” which is the very first line that The Mando says in the series. The Mandalorian out maneuvers his pursuer and replies with “that’s my line” as he fires on the Mercenary ultimately destroying him. With the Razor Crest having suffered heavy damage and fuel loss, The Mandalorian has to land on a nearby planet — that planet is the one and only Tatooine.

The Mandalorian lands his ship, tucks “Baby Yoda” into bed, and heads out into the spaceport that he was designated to land at. He is greeted by three DUM series Pit Droids, who are instantly shot at by the Mandalorian. His dislike for droids is being shown more and more each episode. The docking bay manager comes out and checks out The Mandalorian’s ship. The Mandalorian does not have enough credits for the hangar and the repairs so he heads out in search of work.

This is the part I was most interested in. The Mandalorian walks through Mos Eisley and into the famous Cantina from “A New Hope.” I was curious to see what Tatooine would look like after the fall of both the Empire and Jabba the Hutt. There were not many mercenaries to be seen and there was a row of Stormtrooper helmets mounted on poles. It gives the impression that things did not go so well here after “Return of the Jedi.” The Mandalorian quickly finds work when a young bounty hunter named Toro Calican. It isn’t said where he is from but he does name drop the planet of Corellia and he wears clothes that are reminiscent of Han Solo who is from Corellia.

The two hunters mount their speeders and head into the Dune Sea after their target, Fennec Shand, who is an elite mercenary that assassinated many high value targets. They come across a Tusken Raider group and the Mandalorian negotiates with two of them. I thought this was quite interesting. I have not seen anyone try to negotiate with Tusken Raiders before, let alone with sign language. They are often portrayed as mindless animals.

The two hunters continue on their way when they come across a lone Dewback beast wandering in the desert with its rider being dragged on the ground beside it. Expecting a trap, The Mandalorian tells Toro to stay put and keep his head down as he goes to investigate the beast. He arrives at the Dewback and checks out its owner. The rider is dead and is not their target, but instead another bounty hunter. The Mando finds the dead hunter’s tracking fob and notices it is blinking, indicating that its target is nearby. He stands up and looks to the hills trying to spot where Fennec was. He realizes that he is out in the open and starts to run back to his partner but not before taking a sniper bolt to the armor. In the process of running back to where he came from, he gets hit again by the sniper. The Beskar armor he acquired in Chapter 3 has really shown its usefulness.

The Mandalorian decides to wait until nightfall to make their move on Fennec. He decides to rest while Toro keeps watch. Once it became nightfall, Toro tries to wake the Mandalorian up but, instead of pursuing that idea, decides to pretend “quick draw” moves on the sleeping Mandalorian. Toro is a very young and cocky bounty hunter. If you take into the consideration that he may also be Cerellian, then his actions make a lot of sense. The Mandalorian “wakes up” as Toro was in mid-draw, making it seem like he was awake the whole time.

The Mandalorian comes up with a plan to rush Fennec on their speeder bikes while firing flares to blind her sniper scope. They do so and rush the hill. The Mandalorian is shot off of his speeder and is again shot in the armor. Fennec finds an opening up under the Mandalorian’s helmet and is about to take the shot when Toro sneaks up behind her and gets the drop on her. The two fight it out with Fennec gaining the upper hand. Luckily, the Mandalorian arrives in time to stop her from completely winning.

Meanwhile, the Mandalorian comes back with the Dewback just to find a dead Fennec and no sign of Toro. He makes his way back to Mos Eisley too. He arrives back to his ship to find Toro holding the docking bay manager and “Baby Yoda” hostage. The Mandalorian surrenders and Toro tells the manager to cuff him. She goes to cuff him but finds he has a flash charge in his hand. Once Toro stops monologuing, the Mandalorian fires another flare and uses the distraction to shoot and kill Toro. He rushes over to the body in search of “Baby Yoda” only to find he had jumped out of the way beforehand. The Mandalorian and “Baby Yoda” return to the Razor Crest and take off into the stars.

The episode is not over, however, and the next thing shown is a dark figure walk up to Fennec’s dead body with the sound of spurs every time he takes a step. He stops at the body and then the episode ends.

This episode didn’t do much to further the overall plot of the series, however it did give us insight into what Tatooine was like in the aftermath of the Empire’s destruction. It did have a few references to Boba Fett. Such as The Mandalorian telling Toro that Fennec was no good to them dead, a line very similar to what Boba Fett said in “Empire Strikes Back.” The mystery figure at the end also brings some questions. He has a distinct spur sound when he walks, much like Boba Fett in “Empire.”

Jon Favreau has stated back on August 23, 2019 that Boba Fett will not make a direct appearance in this first season but Dave Filoni has said that there is potential for a Fett appearance further on if that is what the fans want.

Hopefully we will find out soon, but for now we will just have to wait until next Friday’s episode.