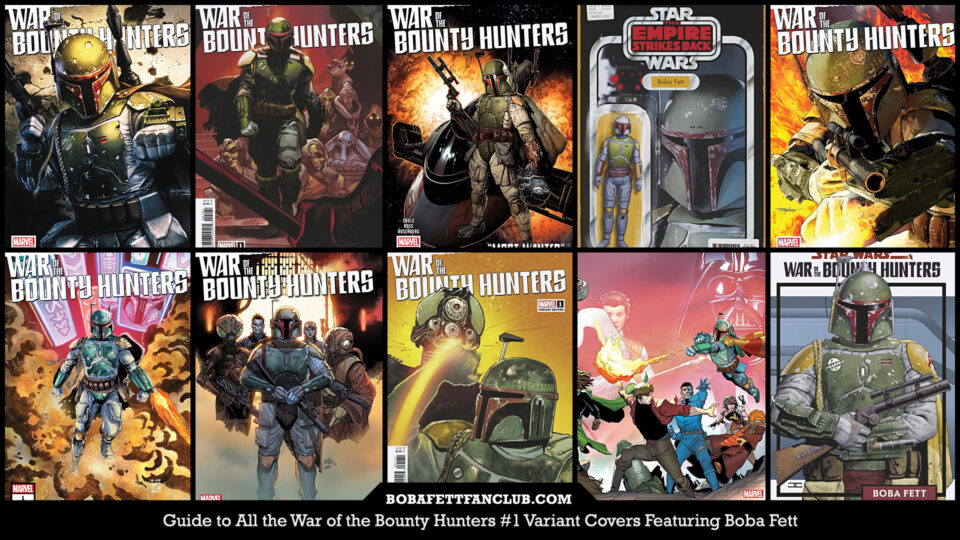 After no less than 30 different artistic works were in the Alpha #1 release, the “debut” issue for the “War of the Bounty Hunters” mini-series arrives June 2nd and already has many different covers.

By popular demand, we’ve put together this handy guide, although all of this info and media has been available in our Collectibles database, where you can easily save what you have, want, and like with your free BFFC account.

2. Giuseppe Camuncoli Variant is a wrap-around style cover. Not a store exclusive so it’s more widely available. TFAW has it for 20% off retail.

3. Leinil Francis Yu Variant has a 1:25 rarity and can be tracked down at IG Comic Store and Comic Kingdom (Canada), and KRS Comics.

4. John Tyler Christopher Variant is also called the action figure variant. (It’s very similar to the artist’s Star Wars #4 cover, except it’s ESB vs. SW, and the top left is different.) TFAW has it for 20% off retail.

5. Mico Suayan Variant (with color by Romulo Fajardo Jr.) will be exclusively available already from Big Time Collectibles. It ships out June 2.

6. Pepe Larraz Variant (with color by Erick Arciniega) has a 1:50 ratio rarity. IG Comic Store and Comic Kingdom of Canada were selling this variant, but they’ve already sold out at the time of publication. KRS Comics has them in stock.

7. Sara Pichelli Variant will have a more wide release. TFAW has it for 20% off retail.

8. John Cassaday Variant is also called the trading card variant with a rarity of 1:25. IG Comic Store was one retailer selling this variant, but they’re already sold out at the time of publication. KRS Comics has them in stock.

10. Mike Mayhew Variant is available May 12 at 9am Pacific on the artist’s website, Black Flag Comics, KRS Comics, and East Side Comics.

14. John McCrea Variant is exclusively available from Ultimate Comics as of May 19. The color version is limited to just 1980 copies. The B&W version has just 750 copies.

15. Tyler Kirkham Variant is exclusively available from Frankie’s Comics on Saturday, May 22 at 11am Pacific / 2pm Eastern.

16. Brian Rood Variant is exclusively available from RuppsWorld.com. 3,000 copies of trade dress and 1,000 copies of the textless (virgin) version. An interview with the artist can be found on Space.com.