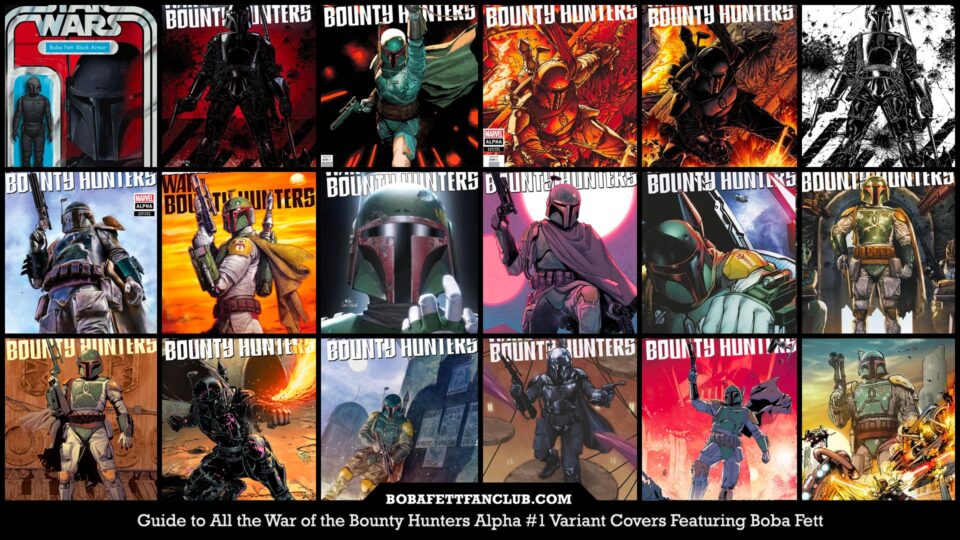 [UPDATE: Looking for the regular #1 variants? Those are different than Alpha #1 and we have a separate guide for those, of which here are many as well.]

To add to the campaign, there are an incredible amount of official variant covers. To help you know about them all, we not only log them in our massive database of Boba Fett collectibles, but we’ll go through them one by one in this article. (The numbering below is for convenience only and nowhere to be found on the issues themselves; they’re actually in the order we’ve learned of their existence.)

There are also micro variants, where there’s the cover with and without all the text on the front. Those have additional rarities and costs. There are also author autographed variants, which we won’t be segmenting out below. For the sake of a broad overview, these are just the primary variants from each artist/retailer.

Thanks to our friends at Fantha Tracks for contributing to some of our info below.

1. Star Wars: War of the Bounty Hunters Alpha #1 features the regular cover by Steve McNiven, who also illustrated the interior.

5. McNiven Crimson Variant has a subtle variant look by Steve McNiven versus his regular cover.

6. McNiven Black Armor Variant has a bolder variant look by Steve McNiven versus his regular cover.

12. Bernard Chang Variant is available exclusively at Things From Another World starting April 15 at 11am Pacific.

17. Phil Noto Variant is sold exclusively at State of Comics and The One Stop Shop Comics.

22. Will Sliney Variant is exclusively available from Jetpack Comics & Games.

23. Erik M. Gist Variant is exclusively available from IGComicstore starting April 23rd at 10am Central. (They’ll be showing off the cover themselves on April 20, but BFFC got a sneak peek.) Mutant Beaver Comics also is selling copies.

25. Tommy Lee Edwards Variant is exclusively available in trade dress and virgin-plus-trade-dress formats from Ultimate Comics as of April 16.

26. Mike Mayhew Variant is exclusively available from the artist’s website starting April 25 at 11am Pacific. Mutant Beaver Comics also has it for sale.

27. Minkyu Jung Variant is exclusively available from Comic Kingdom in Canada and also shared with Comics Elite in the U.S. as of April 24.

30. Todd Nauck Variant is exclusively available May 4 from Comic Kingdom in Canada and Comics Elite in the U.S.

31. Paolo Villanelli Variant has a limited edition of 600. Listed as a May 5 release but it went on sale on May 9 at The Comic Mint and Mutant Beaver Comics. There may be other shared retailers, but it’s not clear.

Star Wars: War of the Bounty Hunters Alpha #1 (Paolo Villanelli Variant)
Marvel | 2021
Affiliate marketing disclosure
When you make a purchase through clicking on a vendor link at BFFC, we may receive a small commission. We hand pick links for official merchandise to vendors with great reputations with their costs, shipping, and customer service. We are independently run and make our own decisions — no pay for play. Best of all, there's no extra cost to you the user and all proceeds cover our costs to be online, with any excess donated or used for free giveaways. Thank you for your support!
Enjoy this post? Consider sharing it on Facebook and Twitter or adding a comment below.
You can easily share this page with this short URL: