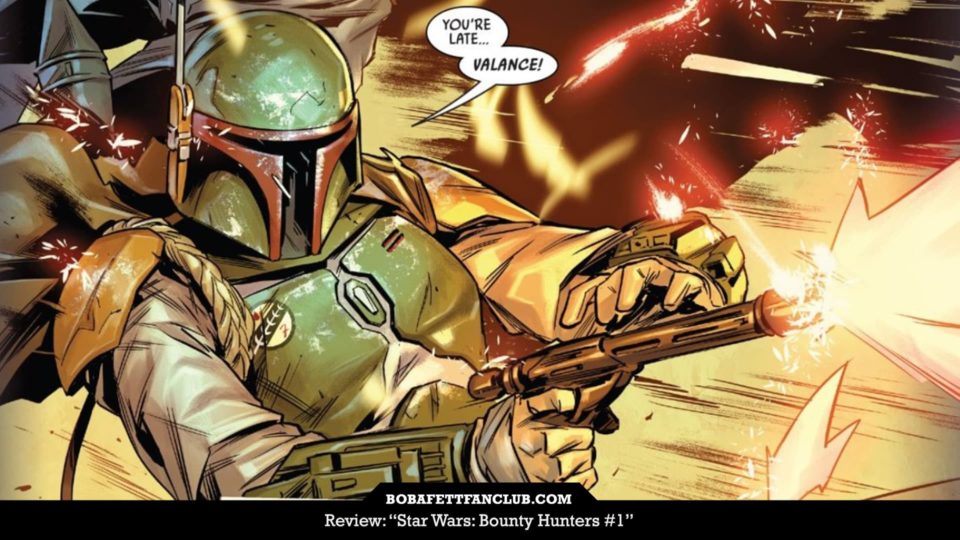 There are many reasons as to why I was excited for this new “Star Wars: Bounty Hunters” comic line. The line-up of characters for this issue was very promising. Boba Fett needs no introduction, and Bossk has recently surged in popularity as well thanks to Clone Wars and Battlefront. But what caught my attention was the third hunter. He is Beilert Valance, and I wouldn’t fault you for not knowing him. He is from Marvel’s original line of comic books. He debuted in a story preceding “The Empire Strikes Back” and his arc ended with him saving Luke Skywalker from Darth Vader. However, all of that is now non-canon, but he is brought to the spotlight once more to star alongside our beloved, classic bounty hunters. His initial appearances paved the way for bounty hunter stories later down the line, so his inclusion here is a fitting tribute.

Our first issue begins with a flashback. There is a team of bounty hunters, including the aforementioned trio, Nakano Lash, and a brat named Khamus who apparently is the son of a prominent figure in the criminal underworld. They are fighting their way into a stronghold on Corellia, with each hunter getting the chance to shine along the way. In one panel Boba Fett uses a black version of Jango Fett’s Westar-34 blaster. Being an avid Jango fan, I was especially pleased by this easter egg. 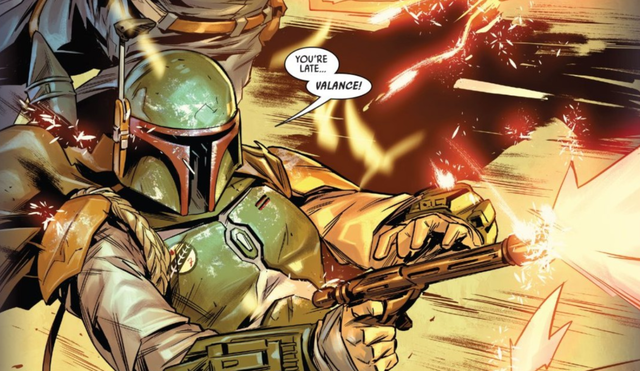 Once inside, the identity of their target is a shock for Lash. We are unable to see who it is, but it makes Lash hesitate and try to save them. However, Khamus pushes past her and blasts the target. This causes her to kill Khamus in retaliation, setting off the underlying conflict of this story. Another hunter contacts Valance and Fett to warn them that the job is botched. Fett mentions to Valance that his mentor just got them all killed; surely Khamus’ father will retaliate for his son’s death. Valance is in disbelief and that’s the last we see of this flashback.

We fast forward to the present era of this issue. The main trio of hunters are all alive and well. Valance is completing another bounty and Bossk is at a bar fuming. He vents that he should’ve been the one to capture Han Solo and Chewbacca, not Boba Fett. In other words, this confirms that the story takes place after “The Empire Strikes Back.” This is reinforced by an even bigger reveal later in the story…

For now, we are treated to an interesting cameo if you’ve been following the comics released under Disney. Dr. Aphra is a recurring comic book protagonist who has notably worked for Darth Vader. Black Krrsantan is a Wookiee bounty hunter who has worked for Jabba the Hutt alongside Boba Fett and even fought Obi-Wan Kenobi. These two enter the bar where Bossk is, who immediately jumps at the chance to settle the usual Wookiee versus Trandoshan grudge. They have a very brutal fight, with Bossk using his hunting knife to great effect. Before either one gets killed, Aphra informs Bossk of a bounty he would be very interested in: Nakano Lash, the traitor from the flashback. 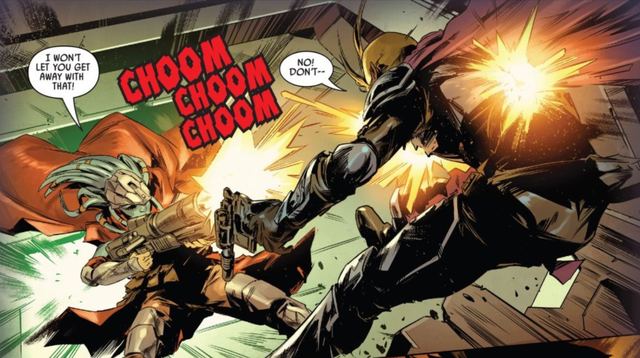 Elsewhere, a middle man for bounties attempts to contact Valance for this same bounty. However, Valance refuses before he even hears it. I am sure he will find out next issue, obviously his inclusion in the story is relevant. For now, he offers the job to a bounty hunter in his presence, reaching out to the greatest hunter himself: Boba Fett. Boba says that he is busy, but the intermediary insists that he would be most interested in this particular bounty as Nakano Lash has resurfaced. We see Boba hesitate, then pledge that he will make the time for this bounty. 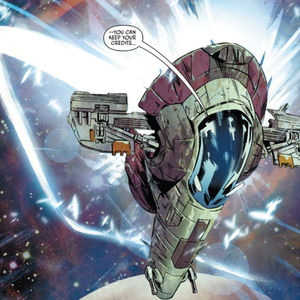 This particular panel is really powerful, because it reveals a very important detail: Han Solo is still frozen in carbonite aboard Slave I. This means two things. The first is that the present setting of this story takes place very shortly after “The Empire Strikes Back.” Boba Fett has not even claimed Jabba’s bounty on Solo yet. Secondly, whatever happened in the past with Nakano Lash is important enough for Boba to postpone claiming his most notable bounty and accept this mission to deal with Lash. Such a move is risky. Every other hunter in the galaxy would leap at the chance to take Han Solo from Boba. So Fett must now maintain control of one bounty while pursuing another at the same time.

This is where the comic leaves us. To summarize: a botched mission jeopardizes Bossk, Boba Fett, and Beilert Valance in one fell swoop. The consequences of this action are deep enough that they all hold a grudge, even years later. Their thirst for vengeance is to the point where they are all willing to drop what they’re doing in order to pursue Lash. It is especially notable for Boba Fett, given that it interrupts a mission we know he completed between Episode V and VI in the original trilogy. We of course know that he makes the trip to Jabba’s Palace and delivers Han Solo successfully. But in this arc we will witness the conflict that took place between those films. “Shadows of the Empire” originally told such an arc in the Expanded Universe and this comic will retell it in current canon.

I enjoyed this comic quite a bit. We rarely see the bounty hunters in canon nowadays. And with how much Boba Fett contributed to the bounty hunter and Mandalorian mythos and popularity, it is great to see him racking up canon accomplishments after much of his history was erased. Bossk and Beilert Valance are two bounty hunters I like as well, who are also deserving of a chance to shine in the spotlight. Having them front and center in the same arc, along with cameos from recently established characters like Dr. Aphra and Black Krrsantan, should make for an interesting mix both for those who already knew of them, and those who are being introduced to them for the first time.

The initial flashback was the type of scene you see early on in a movie that isn’t fully explained at first, but gets revisited and clicks with the additional scenes and information we absorb along the way. Hopefully that is the case here. I have my fingers crossed for an interesting reveal in the future, but in the meantime we get to see the bounty hunters wreak havoc. Let’s enjoy both the journey and the destination. 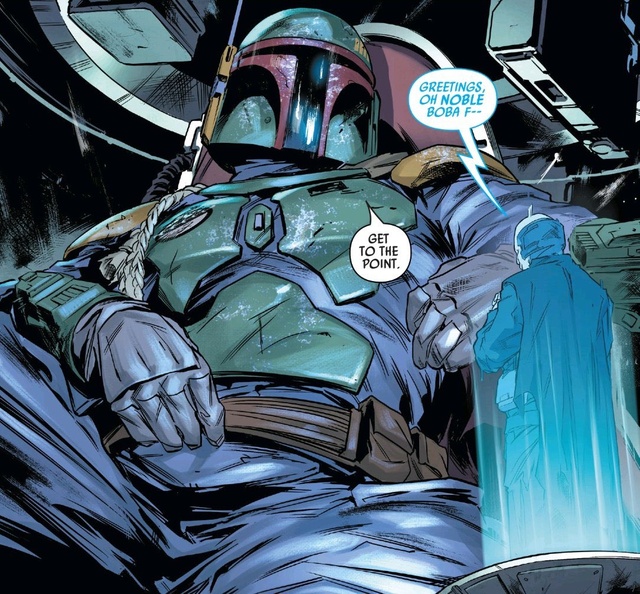