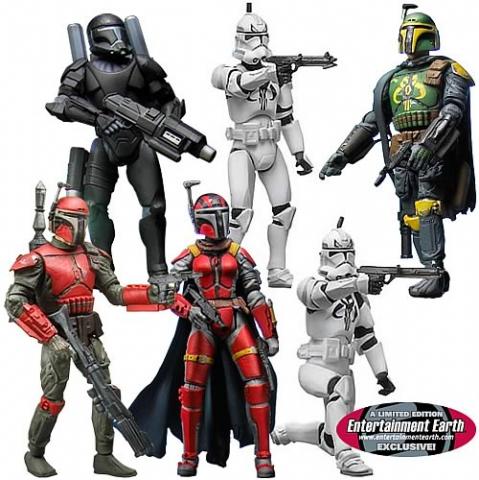 "The Mandalorians are coming!" Those were the first words we heard back in May, when the boards came alive with talk of an internet exclusive of 14 Mandalorian figures from our affiliates at Entertainment Earth. The set is listed as Star Wars "Elite Forces of the Republic" and is due to be released in October of this year at a cost of $66.99.

Talk has run rampant on our message boards, at the Karen Traviss Yahoo Groups and the StarWars.com Message Boards about what is to be expected with this new set of figures of Mandalore's finest.

Our first teaser of what was to come was in the form of Mandalorian training sergeant Llats Ward. He is described as a mercenary, hand-picked by Jango Fett to train his clones on the rainy ocean world of Kamino. Everything in the life of Llats revolves around battle and war. He has studied and memorized the campaigns of all the great Mandalorian leaders of the past, and uses these as lessons to enhance the clone troopers' fighting skills. The figure itself has a large Mandalorian skull painted on his chest and sports a removable helmet, along with an all new torso and ammo belt mold. However, the legs and arms appear to be repaints from a Boba Fett figure, right down to the shin tools in the leg pockets.

While the rest of the figures were hidden in shadows, the promotion states that that all 14 figures will be revealed at Comic Con International at San Diego, in July. However, it seemed every few weeks we were teased with a little more of what the figure pack holds in store. The second (or third, if you count them twice) teaser was a picture of two Clone Troopers whose chest armor is decorated with the Mandalorian skull symbol and helmets with the honor marks of Mandalorian Jaig Eyes.

As the weeks went by, we were also introduced to Rav Bralor, the first female Mandalorian figure ever made. Dressed in red armor, Rav Bralor is described as a sharpened battle instrument, attacking with surgical precision and stunning efficiency. Jango handpicks her to assist in the training of the clone commandos, where she hammers their independent natures into razor-edged power. This rings true again of the old Mandalorian proverb which says, "Ke barjurir gar'ade, jagyc'ade kot'la a dalyc'ade kotla'shya." (Train your sons to be strong but your daughters to be stronger.)

Fans then realized that the figure set was going along with the legend of the Cuy'val Dar, which is Mando for "those who no longer exist." This title was given to the 100 training sergeants, 75 of which were Mandalorians, who Jango Fett recruited to run the clone commando training program. So, it was no surprise when the next teaser to be released was also one of the Cuy'val Dar, a training sergeant named Dred Priest. Dred also has red armor and is described as relishing the challenge of creating elite soldiers. Chosen by Jango to be a training sergeant on Kamino, he forms a secret battle circle among his fellow sergeants, in which they "practice" their training techniques in brutal competitions. Dred seems to be a repaint of Llats Ward, but in lieu of a cape, he dons the more traditional rocket pack. 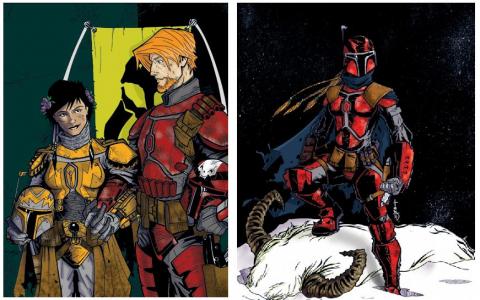 Both Rav Bralor and Dred Priest are obviously based on artwork by Tom Hodges which was used in the Star Wars Insider #86 article "The Mandalorians: People and Culture" written by Karen Traviss. Speaking of Ms. Traviss, fans of her Republic Commando series of books will be tickled to death that the most recent figure of the set to be released is none other than one of the commandos from Omega Squad. Kandosii! (Excellent!) First listed in Toyfare Magazine #121, then on the Entertainment Earth website, this commando is the demolitions expert from Omega Squad and has all black armor. The figure appears to be a repaint of the Republic Commando Scorch figure, which was released last year. However, since the release of a prior set of all four commandos' from the game, one can't help but wonder if that means we'll get to see the rest of Omega Squad, in all their glory? This has led to more speculation about who the other Mandalorians in the set will be, because where would Omega Squad be without Kal Skirata or Walon Vau? We can only cross our fingers and hope.

With the San Diego Comic Convention just a few days away, Entertainment Earth has stepped up it's promotions of the Mystery Figure Pack. With ads in the most recent Star Wars Insider magazine titled "Jango Fett's friends are visiting." They're here to train your army" to the more fun loving Toyfare Magazine crowd titled "The Mandalorians R IN UR Base.. Trainin' UR Doodz!" Whatever the case, fans are waiting with anticipation to see what other figures are in store. Rest assured, though, you won't have to wait for long. With several of our members from the BFFC attending the Comic Con this year, there will definitely be a follow-up to this article along with pictures of the rest of the figures.

So, dust off your armor, and shine those buckets. It's time for the son's and daughters of Mandalore to answer the call. Oya, ner Vode! ... (Let's hunt, my brothers/sisters)!