Is That Boba Fett's Slave I Pictured on a LEGO "Rogue One" Backdrop at Toy Fair?

Spotted moments ago on Twitter: "More #LEGO #StarWars Reveals from Nuremberg" in this photo and caption via @StudShooter, which appears to show a Firespray-class ship like Boba Fett's Slave I (if not the real deal) alongside "Rogue One."

[UPDATE #1: We've spoken with StudShooter to check if he shot the picture. He didn't. We then worked to track down the original source using some reverse image searching, which led us to PromoBricks.de. Photography was prohibited at the event, so the original photographer may be intentionally anonymous.]

This may or may not be a validation of our findings.]

[UPDATE #5: We've all looked past one other oddity. "Rogue I" sure mirrors "Slave I," yet the official title of the upcoming film is "Rogue One." Why would LEGO be dropping the formality? Could this all be a clerical / marketing error?]

So far, Boba Fett has only been rumored to appear in the first "story" film. This could be spoiling and thus confirming that rumor. That said, see our Fett Fact Check for more about those rumors thus far.

Next to the "Rogue One" image is a TV series announcement. According to PromoBricks.de, that's a "Droid Tales-esque series titled The Freemaker Adventures."

Nuremberg is the location for Spielwarenmesse, the Nuremberg Toy Fair, going on right now in Germany. Hat tip to Peter Buchanan for the heads up.

In 2014, Hasbro showed off a Boba Fett with "Star Wars Rebels" packaging, igniting comments that Fett might finally appear in the show. That ended up to be false because Hasbro simply re-packages "classic" figures in the latest line. This is why we also ended up with "The Force Awakens" packaging for Boba Fett and Slave I, even though neither are in the new film. 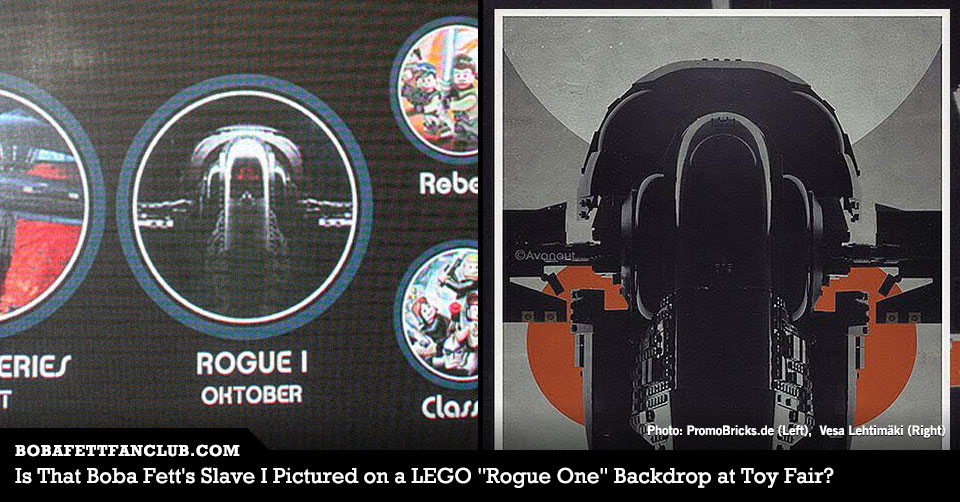