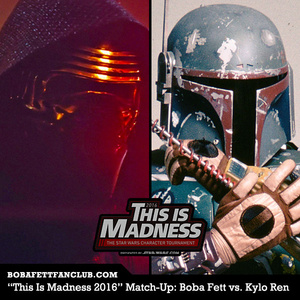 For more about this 24-hour contest, including more graphics to use and share, please see our post on BFFC: http://j.mp/1PGRnAk 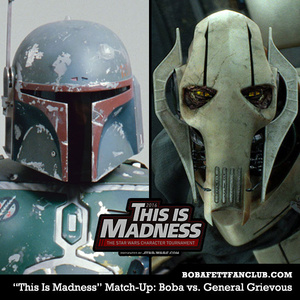 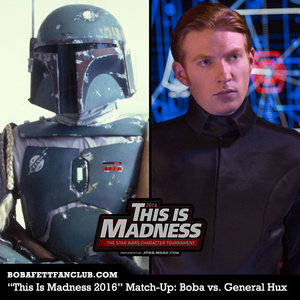 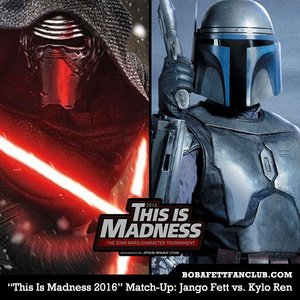 RIGHT NOW: Help the hunter defeat the knight. Vote for #TeamJango at http://thisismadness.starwars.com. 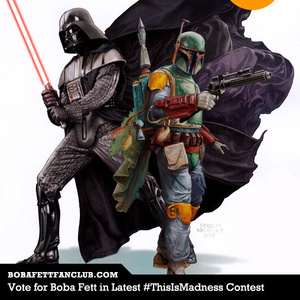 Pictured here is "The Assassination of Darth Vader" featured Boba Fett versus the Sith Lord himself. The comic was part of "Free Comic Book Day" and had this cover art by Douglas Wheatley. 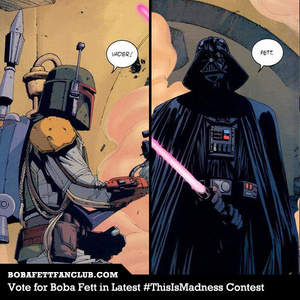 Vote for #â€ŽBobaFett in #â€ŽThisIsMadness!
http://thisismadness.starwars.com (Written and drawn by Kia Asamiya aka Michitaka Kikuchi for "Star Wars Tales" #11, published in 2002 by Dark Horse Comics.) 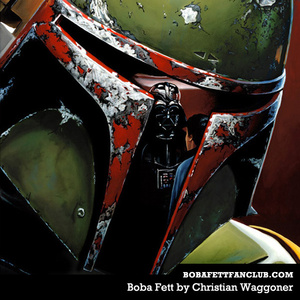 #BobaFett on Cloud City with #DarthVader and #LandoCalrissian by Christian Waggoner (@christianwaggonerartist), part of a series of paintings involving helmet reflections

Boba Fett has his sights right now on beating Darth Vader in this year's #ThisIsMadness. Vote for #TeamBoba at http://tim.starwars.com/ 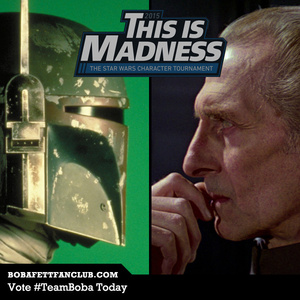 Thanks for everyone who enjoyed our April Fools Day gag yesterday. Long live Jango Fett! 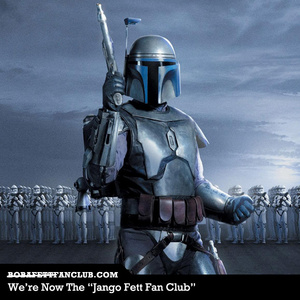 After the latest #ThisIsMadness vote kept #BobaFett in the Sarlacc -- with no recount unless it's trending on Reddit -- we're left with no choice but to switch colors and costumes after over 18 years of carefully curating Boba Fett fandom online. Guess we're not bringing home the bounty, so it's time to carbonite freeze bobafett.com. But, don't worry, we'll keep our head on straight with the new venture: JFFC! 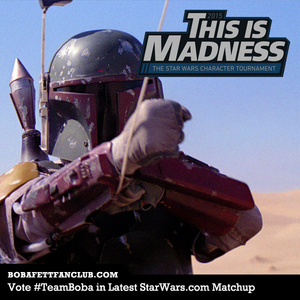 When this match-up began, #BobaFett led with 66% of the vote. Hours later, the lead fell to 23%. Throughout Saturday, according to our monitoring, Boba climbed back steadily without irregularity to reach 39% of the vote. We had the likes of Daniel Logan, Freddie Prinze Jr., and even William Shatner giving shout-outs for Boba. Then, hours later as the United States began to fall asleep, 9% of that gain disappeared with no social media track record of any push for vote to #TeamJango.

Last year, Boba Fett had 70% of the vote when he faced Jango. Both last year and this year, the starwars.com poll appears to have used browser cookies to track votes. Deleting the cookie may be allowing repeat votes. 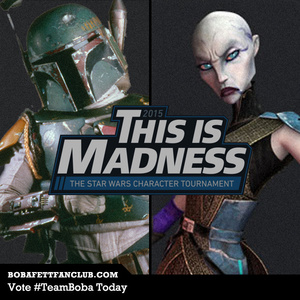 In Case You Missed It: Vote #TeamBoba. You've got until 4pm PST today to vote for #BobaFett in the latest #StarWars #ThisIsMadness at http://thisismadness.starwars.com 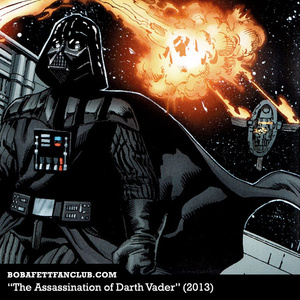 Despite some unusual observations we noticed during the last three days of online voting, #DarthVader moved on, defeating #BobaFett in the popular vote in the #ThisIsMadness2014 contest. To poke some fun at the result, we highlight the 2013 #comic, "The Assassination of Darth Vader," in which Fett and Vader duke it out. In this panel, #SlaveI has just taken out some #TIEFighters nearby the Dark Lord of the Sith.

More about the comic book in our Bounty collectibles database:
http://www.bobafettfanclub.com/bounty/books/comics/the-assassination-of-darth-vader/ 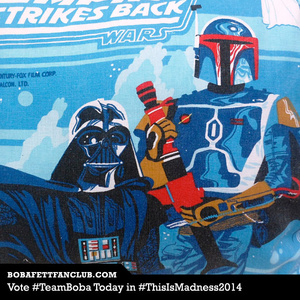 Less than 24 hours now to vote in the #FinalFour round of #ThisIsMadness2014. Spread the word. #Vote everywhere you can. And, just like this vintage print from 1979, remember #BobaFett stands above the competition. 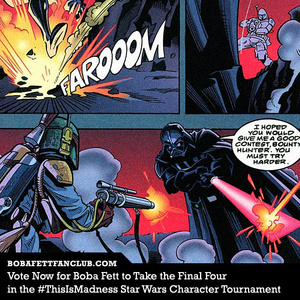 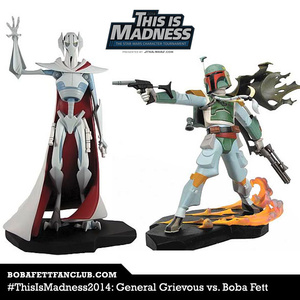 Vote #TeamBoba right now in the final two hours of the latest matchup at #ThisIsMadness2014: http://thisismadness.starwars.com/

#BobaFett faces #GeneralGrievous in the "Duel of the Eights" bracket. The total vote percentage will be displayed after 10am PST today (Thursday, April 3, 2014). If Boba wins, he faces #DarthVader or #JabbaTheHutt in the "Fate of Four" bracket. 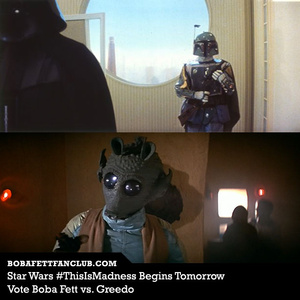 Starting tomorrow at 10am PST, voting begins for the official #StarWars #ThisIsMadness online character tournament. For his first matchup, which he must win to continue, Boba Fett faces Greedo. Spread the word all week long. Vote #TeamBoba.