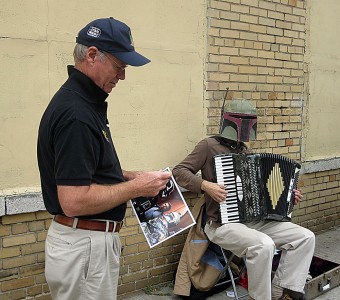 Boba’s Basement Tape Unearthed at New York Comic Con — In front of a 34th Street parking garage just west of Gotham’s 10th Avenue, a couple of blocks from the Javits Center, Dak made the final connection that led him to unearth the apocryphal Basement Tape of “Greedo” by the Four Fetts. There, he was led to a digital recording of the alleged demo tape by a clone Boba who now busks as “The Renegade Accordian — New York’s only musical bounty hunter.”

Listen to the MP3

The former X-Wing pilot first alluded to the recording in a Star Wars Blog post just after Celebration Europe II. In the post, he inexplicably claimed that the Four Fetts were a Mandalorian doo-wop group from the mid-fifties who did the number as a cover version of the Cadillacs’ “Speedo.” At the Essen main stage in July, the Four Fetts appeared with Warwick Davis, but they only performed their well documented Maori haka, led by Jango who joined them from the audience. No mention of any “Greedo.” However, following Dak’s NYCC finding in October, we now we have evidence.

Mark Twain famously said, “Never let the truth stand in the way of a good story.” Where there’s a backstory, Dak will always find it. This one involves a lot of conjecture and what could best be called interpolation. So, if they still give the Janet Cooke Award for inventive journalism, this dubious tale would be Dak’s submission.

The story begins on Cloud City, where something else was going on besides Lando Calrissian’s so-called betrayal of Han Solo when Boba made his Bespin appearance. Lando and Fett were actually engaged in another underground deal behind Vader’s back—to record a demo and eventually produce a music video of Jango and the Four Fetts performing “Greedo” at the Mos Eisley Cantina. The video (which is thought to have been made sometime later along with a re-recording with Jango doing lead vocal) had something to do with Lando’s scheme to make money off Boba’s abiding resentment over once being called a Rodian in some unresolved saloon altercation over musical tastes. As petty as it may sound, Boba’s long-harbored pique was a well known joke throughout the Galactic underworld. Rodians were known for their jungle music, whereas Boba was more into country blues.

As part of his Cloud City hotel and casino operation, Lando ran dozens of recording studios that made money off many of the singing cowboys that came off the range to work in the Bespin gas mines. Lando knew the music business. At one point in his career long before he became the baron administrator, he had made a hyperspace jump to a Core World in our region of the Galaxy where he ran with a noted singer named Billie Holiday. Leveraging his underworld connections there, he got the idea to develop a chain of Billie Holiday vocal studios. Finally realizing his vision on Cloud City, he brought with him a record producer/musician, one Gus Russo, who had a loose connection to The Outfit’s fabled intergalactic fixer Sidney Korshak. Also a tennis pro who was the guitar instructor to the great Vitas Gerulaitis, Russo fit right into Cloud City’s resort and casino scene and stayed, performing occasionally as “Boba Frett.” As the front man of a group known as String Theory, he did covers of everything from Django Reinhardt to Commander Cody and His Lost Planet Airmen. As a favor to Lando, Russo agreed to do the Fett demo. It had to be a quick session, given, as we all know, that Boba was supposedly only on Bespin to hunt bounty.

From the urbane Russo’s POV, Boba was a rough cowboy fresh off the range. Fett came into Russo’s basement studio intending to do an edgey Johnny Cash and “Folsom Prison Blues” in his bass/baritone register. Russo persuaded him to think doo-wop, which required Fett to stretch himself perhaps a little far, flatten his voice à la Billie Holiday and pitch it in the upper modal register as a tenor, i.e., so his normal vocal fry did not get lost in the doo-wop mix. Boba thus gave it a nasal, bluesy twang to ride above the rest of the Fett clones. Hence, we have this hastily recorded doo-wop oddity with a weird cowboy-blues feel that refers back to that Singing Ranger from Nova Scotia, Hank Snow, or even the earlier Singing Brakeman, Jimmie Rodgers. One can only imagine what the final music version sounded and looked like. The Galaxy awaits.

Listen to the Track