[UPDATED 2/5/2016: The January release date of the figure has come and gone. Disney is skeptical to give the new date, but we did some investigating and believe it's March 15, 2016. The main evidence is a photo of Gamestop's computer system listing the figure with the date. The second is a vague reply we got from John Vignocchi on Twitter upon asking for a confirmation at least a half dozen times -- over the course of several months.]

[UPDATED 6/24/2015: The individual Boba Fett figure, without needing to buy a platform-specific game, will be available in January 2016, according to two tweets from John Vignocchi, VP of Production on Disney Infinity 3.0.]

Moments ago, the official Disney Infinity page on Facebook just confirmed Boba Fett's role and release in the new game, Disney Infinity 3.0, and its "Rise Against The Empire" play set. He'll be on Sony Playstation before being available on other gaming systems starting around the end of the year. 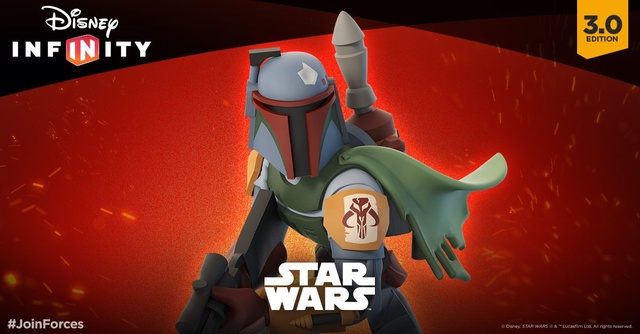 [UPDATED 6/17: You can now pre-order the Saga Bundle on Amazon, which includes Boba Fett:

Here's the official announcement at E3 by Disney Infinity's VP of Production, Johnny Vignocchi. Jump to around the 3 minute mark for the full effect, complete with "BOBA FETT" on the giant screens at the event:

Here's an excerpt from the official press release, which also hosted many new screenshots of Boba Fett:

One of the most feared bounty hunters in the galaxy, Boba Fett will use his martial arts skills and blaster rifle to help the Galactic Empire hunt and track down prey. Instantly playable in the updated and enhanced Disney Infinity 3.0 Toy Box, Boba Fett is also unlockable in all of the Star Wars Play Sets. 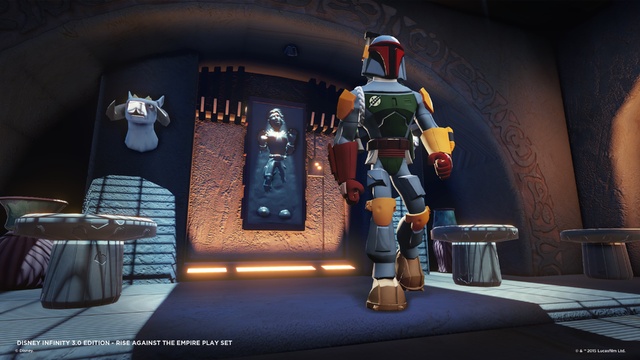 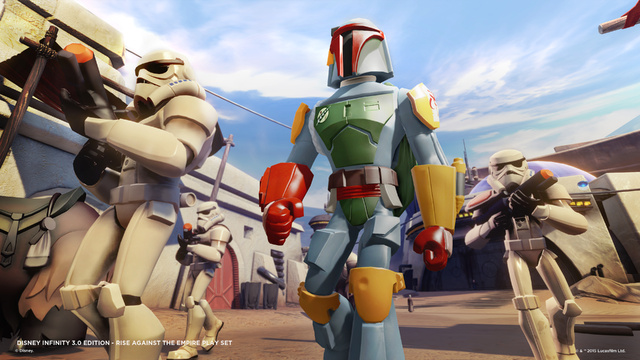 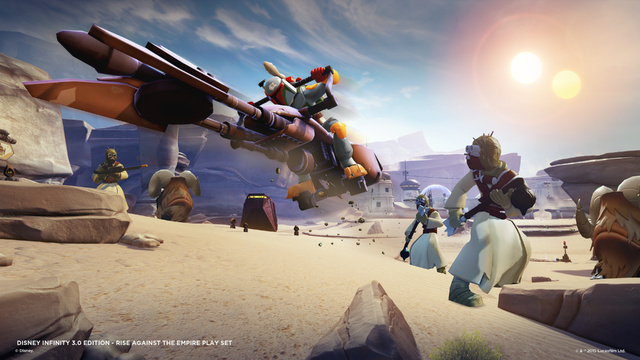 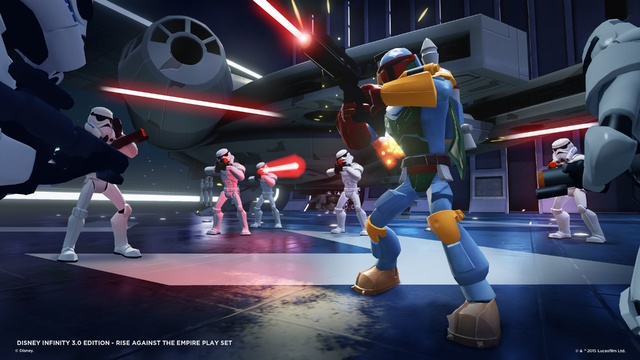 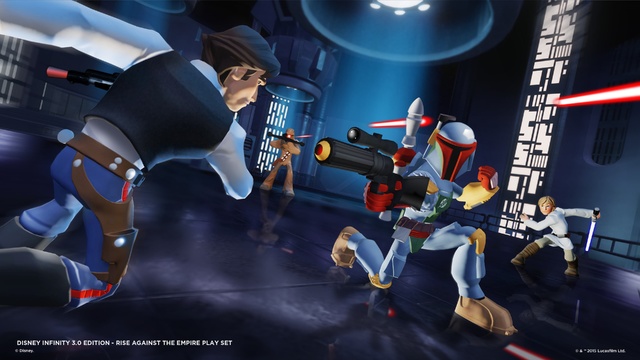 He also appears in the official trailer, released today to coincide with E3 events this week:

ComicBook.com has some clarity about the release:

[I]f you want to play with him before the Holidays, you can only do that on PlayStation platforms. The character will be part of the Sony-exclusive Special Edition, which will also include the Original Trilogy-era playset a month before it hits shelves for any other platform or the public. ... The Special Edition will hit the same day as the general release of the game, which also comes with the Twilight of the Republic Clone Wars-era play set this fall, and is available for pre-order now.

The figure was also at E3 for journalists: 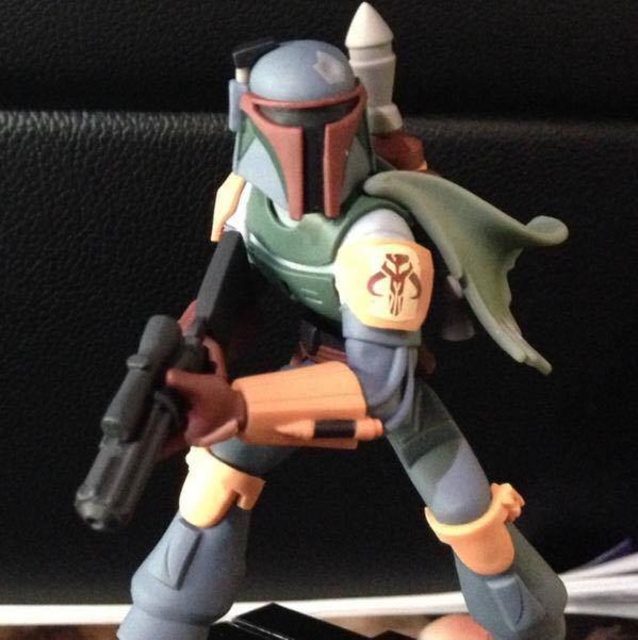 Here's the publicity photo / render for the figure: 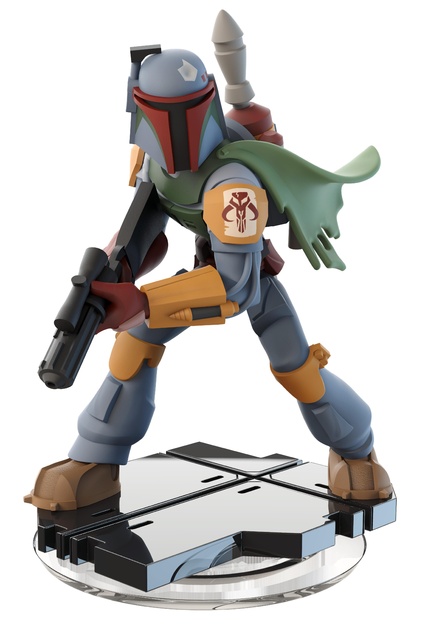 There's even more within a post-announcement interview with Johnny Vignocchi done on YouTube Live at E3. Jump to around 3 minutes in before they show the additional game footage:

(Helmet nod to BFFC fan Gustavo Perez for giving us the heads up on the initial promotional graphics, and to Twitter user angelos_giorgos for the Vignocchi links.) 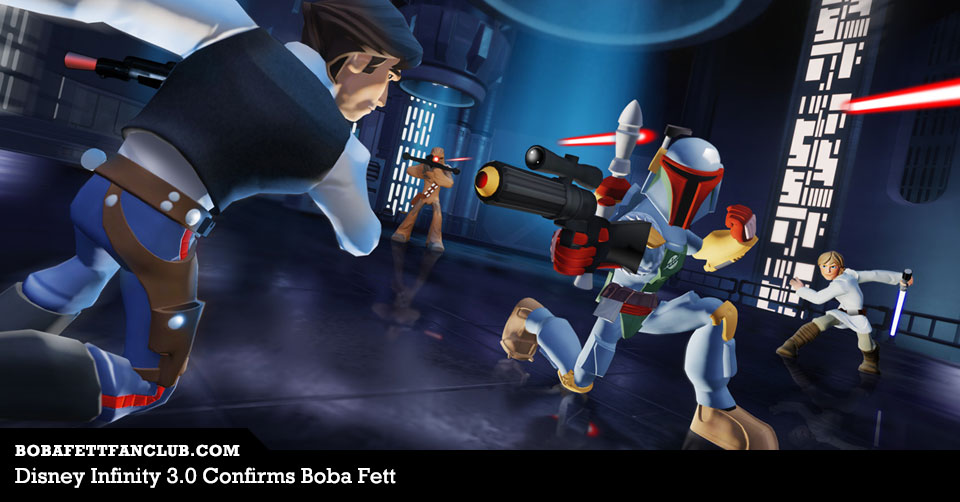