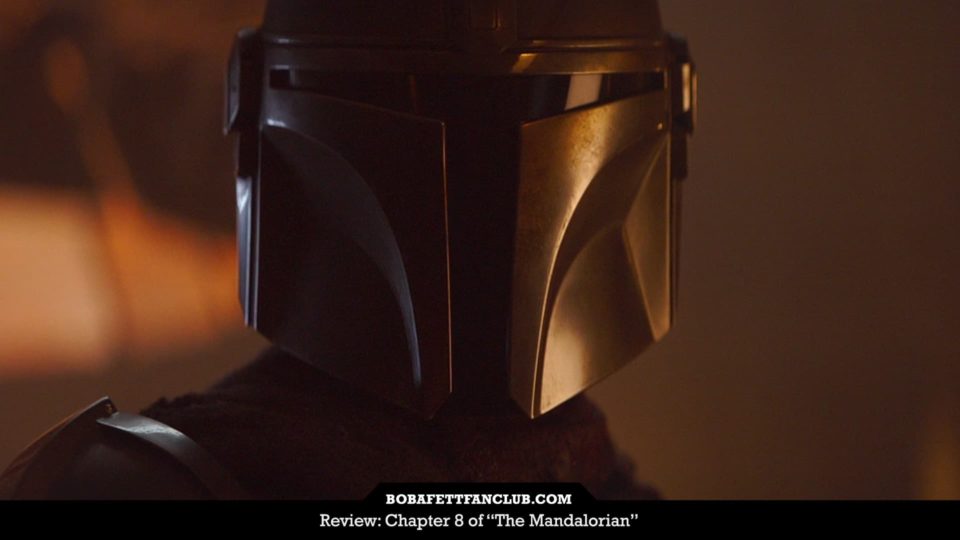 Review: Chapter 8 of "The Mandalorian"

After the long, fun-filled and — for Disney — undeniably successful 8 weeks of "The Mandalorian," Season 1 comes to a close with the last episode titled "Redemption," which I have the immense honor of reviewing.

The episode picks up where the previous one left off and, before we find out what happened to the Mandalorian, it follows the two Scout Troopers that gunned down Kuiil the Ugnaught as they are returning with Baby Yoda they snatched from him. They try to enter the city and bring their catch to Moff Gideon but are advised by their command to stand by instead and wait until the newly arrived Moff is done establishing his dominance by murdering every trooper that irritates him. The troopers are familiar with the old Imperial concept and decide to take it easy.

Before I continue, the opening really kills the tension for me. I realize this is subjective and I'm sure many people will disagree, which is fine, obviously. This is just my two cents: I'm fond of openly sadistic Stormtroopers, because then I don't feel bad when they inevitably die, but these two were also total goofs, so I'm torn.

I guess it comes down to what side you take in this never-ending war between comedy and tragedy in the movies. I just don't feel like the jokes' payoffs were worth enough to slow down the drama of the previous episode, as they weren't particularly witty. For the most part, it was aim trouble.

The thing is, the Stormtroopers bad aim is a result of bad writing and it always was. You can either work against this by thinking through you heroes' journeys more carefully or dive right in and establish this to be an in-universe canon to get three-second giggles and potentially ruin every future tension you could ever create with these characters. It's just lazy, at least in my book. You might feel differently, of course, and I guess all I'm really saying is, I think Stormtroopers deserve better. And we, as viewers, deserve better, too, but I digress.

The Scouts' break is cut short by the IG-11 unit, the robot who was converted from a merciless hunter to a nurse droid by the late Kuiil. It quickly disposes of the troopers, picks up Baby Yoda and sets off to help its new masters in the settlement.

Down there, still boxed in by the remnants of the Imperial Army, the Mandalorian, Cara Dune and Greef Karga are listening to Moff Gideon's ultimatum while the Stormtroopers are assembling an E-Web heavy repeating blaster cannon in front of the building. Gideon knows Baby Yoda is not with them and wants the gang to come out and reveal his location, else the stormtroopers will level everything with the E-Web. To give them some incentive, Gideon flaunts his knowledge about every person in the trio by addressing each one directly by name and adding some little tidbits about their life.

Surprisingly enough, he even knows the identity of the mysterious Mandalorian and for the first time in the series, we hear Mando's name — Din Djarin. This convinces the protagonist that this man is indeed Moff Gideon, because, apparently, the only place where his name was ever stored was the registers back on Mandalore and Gideon was the Imperial Security Bureau officer during The Purge on Mandalorians.

I don't know, it seems like a bit of a stretch to assume this person is therefore the only one able to get that kind of information but I don't doubt it is Gideon, despite the fact he was supposed to be executed for war crimes, as Cara points out.

We also finally get to see poor Mando's flashback of his parents' deaths in its entirety. He is saved from the droids by a friendly Mandalorian who flies off with him to safety with a jetpack. The foundling later repays his new family by accepting their culture as his own and dedicating his life to the Mandalorian creed.

It is the Mandalorians that Din Djarin decides to once again turn to to get help. He confides to the other two that there is a Mandalorian base in the sewers and they will help them out with fighting off the Imperials. This was unexpected to me, since I assumed they moved the covert, as was established in the third episode, but looks like they didn't think they needed to hurry up with that.

With the help of IG-11, who blasts its way onto the scene, and Baby Yoda, who saves their lives with his Force abilities again, they manage to hold off Imperials long enough to get into the sewers, but not before the Mandalorian is mortally wounded by Gideon. Cara tries to treat his head wound but he refuses to take off his helmet in front of anyone, choosing a warrior's death over breaking the creed. Reluctantly, the humans leave with Baby Yoda, but the droid stays behind and manages to persuade Din to remove his helmet in front of it, since it doesn't technically count as a living thing.

And so, the viewers are finally allowed to see the face of the man behind the mask, who, unlike the stoic Mandalorian helmet, looks a little scared and mostly disconcerted/shell-shocked by recent events. Luckily, the droid is a better medic than a comedian and manages to save Din's life while unsettling him with strange jokes about anatomy.

Joining the rest of the group, they all wander aimlessly through the sewers until they locate what's left of the Mandalorian base and the Mandalorians that lived in it. It turns out Imperials settled the score with them shortly after Djarin fled Nevarro with Baby Yoda and now only a pile of broken armor pieces remains of the proud warriors.

Seeing the death and destruction he brought to his second family, once again, Din decides to stay and face his destiny with honor while urging the others to continue without him. However, his ruminations are interrupted by The Armorer, who survived the Imperial death squads and now lingers at the place of tragedy to take care of the armor of her fallen brethren.

She tells Din Djarin he must act as a father to Baby Yoda, since the creature is a foundling by Mandalorian standards, and he must return him to his species, not endanger him or abandon him by staying to fight Gideon's troops. Before she sends him off, she outfits him with a jetpack and his new signet, proclaiming that he and Baby Yoda are now a clan of two.

The Mandalorian accepts his new responsibility and, with a newfound insight and will to survive, leads the gang out of the sewers while The Armorer stays behind and faces off with the Imperials following him. She manages to kill off the one squad we see enter the forging room, but her ultimate fate is unknown. I hope we will see her again, since she is easily my favorite character of the series and I can't think of a better person to conserve the Mandalorian way until a new wave of warriors rises to take the creed.

The Mandalorian and his friends are almost out of the sewers, when they see a group of Stormtroopers waiting for them at the mouth of the tunnel. Their chances look bleak, but IG-11 tells them that its manufacturer's protocols are still in place and if Mando swears to take care of Baby Yoda, it will be able to revert to them and self-destruct to prevent capture, taking the troopers with it. Mando is saddened by this and has a hard time allowing perhaps the only droid that has ever earned his trust to sacrifice itself but there seems to be little to no alternatives and IG-11 marches off to meet its demise.

Thanks to the droid, the team's way is clear and they walk out back into the sunlight. Before they can be truly safe, though, there is one last catastrophe to face — Moff Gideon's TIE fighter. This time, the Mandalorian is ready to face him on equal terms, or at least as equal as a man against TIE fighter can possibly be. And so we are treated to the last action scene of Season 1 when Din Djarin finally takes to the sky to confront the man who played such a pivotal part in destroying his culture and murdering his clansmen. It is a short but beautiful fight that ends with the Mandalorian exploding part of the craft and sending it crushing to the ground and I think it is worthy of being the big finish of the series (so far).

Now, with the threat finally over, the only thing left to do is for the group to say their goodbyes. Cara Dune decides to stay with Greef Karga on Nevarro and rebuild the Bounty Hunter's Guild but the Mandalorian knows his true destiny lies beyond anything bounty hunter life could give him. He must go find Baby Yoda's people and with luck, maybe even meet with the remaining Mandalorians that managed to flee Gideon's blaster bolts.

He blasts off with his jetpack, Baby Yoda in his arms, mirroring his own rescue all those years back and closing the cycle. Before the definitive end, we also see that Moff Gideon's life hasn't ended in the crash. He survived and is actually in a possession of the Darksaber, an interesting revelation. Din Djarin went from a helpless foundling to being a protector and an adoptive father himself but it looks like this is only the beginning of his troubles.

This episode was a little disjointed, just like this whole series, but very fresh and enjoyable. There's so many things good and great about it just like about the Mandalorian as a whole. Interesting planets, nice characters, beautiful soundtrack and... it's just different. At the same, it has inconsistent narrative. Baby Yoda was barely utilized at all. We still don't know anything about him and he is such a lifeless puppet sometimes. Sometimes he is clueless, while other times he knows exactly what's going on to save the day. There's no rule to it. The dialogue is amazing sometimes, yet terrible at times. I'm surprised by how often they use words like "God" and "hell" since that was something original Star Wars always shunned from and that's how I prefer it.

The series is just a series of western cliches with a spark of novelty. I understand is as a homage and I think it is what it was supposed to be. It ventures into unknown territories, always balancing between juvenile and grown-up, mainstream and mystical. "The Mandalorian" is a strange newborn and there's no telling what it will grow up to be, but I think it will have to choose a side in the next seasons. And I hope it will choose to be the best live-action thing we ever had in Star Wars history, rather than to stay in place and flood us with weak jokes, because honestly, the potential of "The Mandalorian" is unprecedented.