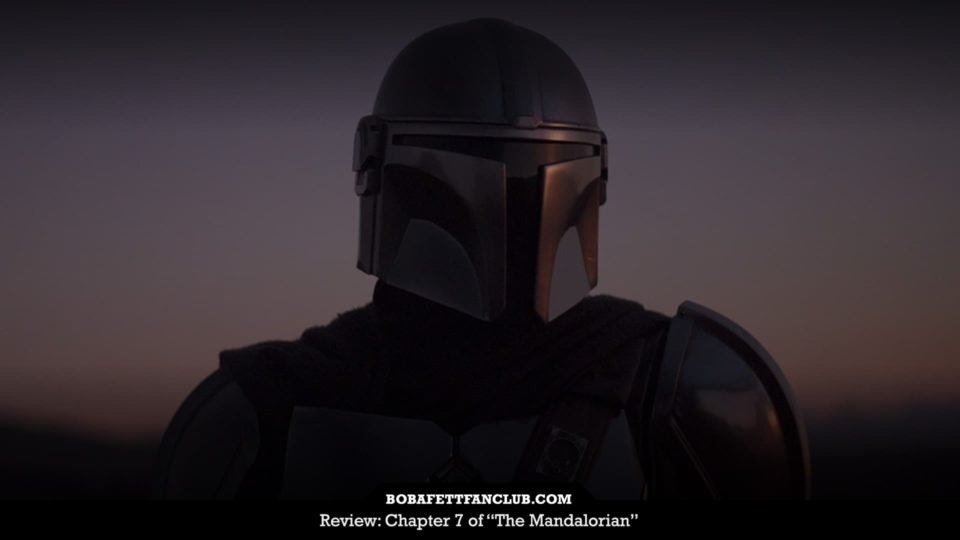 Review: Chapter 7 of "The Mandalorian"

The last few episodes of “The Mandalorian” seem to have detoured somewhat from the main storyline, and chronicled the Mandalorian accepting “side missions.” However, we now return to the previously scheduled conflict.

We start out with the Mando and Baby Yoda aboard the Razor Crest. Mando receives a transmission from Greef Karga, who we last saw during the showdown to save Baby Yoda from the Imperials on Navarro. He tells Mando that a lot has changed and that the Imperial Client is now an enemy to the Bounty Hunters Guild. The Imperials have taken over and now run Navarro. Karga proposes that they work together to eliminate the Imperials. The Mandalorian and Baby Yoda would be the bait, while the bounty hunters provide the firepower. Not alarming at all, right?

Right away, I assumed this was a trap. Mando’s adversaries would all be together and he would be heavily outnumbered if he accepted this proposition. The bounty hunter “allies” would turn on him at the first opportunity. Unfortunately, he has little choice. He has been on the run and barely surviving by the skin of his teeth. His resources are low and he has had to fend off multiple bounty hunters and mercenaries at this point. In other words, the current pattern of events is not sustainable. Neither he nor Baby Yoda will be safe while the Imperials are alive. So he decides to accept this alliance… but acquires reinforcements first.

The Razor Crest lands on a familiar planet: Sargon, the location where he and Cara Dune defended the village from a rogue AT-ST walker. She is still there, and we saw her fighting a bar patron in a bet. Mando approaches her, and explains his situation. At first she is hesitant because she has a quiet life on Sargon. But when Mando mentions that the enemies are Imperial, she cannot resist joining the fight.

Someone needs to watch Baby Yoda while Mando and Cara Dune conduct this mission. Thus we are reunited with a familiar face: Kuill, the Ugnaught who helped Mando at the beginning of the season. But with him is IG-11, who comes into the Ugnaught’s home offering tea. Mando is alarmed and immediately draws his blaster, with Cara following suit. Kuill stops them and explains that he has repaired and reprogrammed IG-11 to be a protector rather than a hunter.

Initially, Kuill states that he is not suited for watching baby Yoda, and offers to program IG-11 for it. However, the Mando still hates and distrusts droids, so he refuses that counteroffer. Kuill tells him that droids are not inherently good or evil; rather, they are a reflection of whoever programmed them. Kuill says he will help, but must be accompanied by IG-11. They will also be joined by the Blurrgs, the magnificent piranha horses that they had used as mounts.

While they head to Navarro, Cara Dune and the Mandalorian have an arm wrestling match. Baby Yoda, in his innocent naïveté, mistakes this for another hostile fight, and begins Force choking Cara Dune. This was surprising, because Force choke is an ability strongly associated with the Dark Side. Granted, Baby Yoda doesn’t know any better. Kuill says he has heard rumors of such incidents during his time working for the Empire. He and Cara Dune, who is still agitated, argue about his loyalty. Mando eases the tension by asking Kuill to make a better bed/container for baby Yoda.

Team Mando arrives on Navarro, meeting Greef Karga and his bounty hunters out in the middle of nowhere on Navarro. Karga “recommends” that Cara Dune stay behind to guard the ship due to Jawas. This is a bad sign: he said this because he is trying to isolate Mando as much as possible, making it easier to kill him.

The sun sets quickly on Navarro, so everyone is forced to camp out for the night. Sitting around the campfire, Karga and Mando discuss the plan. They will meet with the Client, present Baby Yoda as bait, and Mando will kill the Client. The stormtroopers will either scatter or join Karga for employment, since at this point they are just mercenaries rather than official Imperial soldiers. Karga states that, even if the troopers don’t comply, that the Client should only have four with him and that they can be taken out. All of this sounds way too convenient and simplified.

Suddenly, the group is attacked by large winged creatures. They are similar in size and sound to Pterodactyls. During the fight, Greef Karga is wounded on his arm by one of them. The creatures are venomous: Cara notes that the venom (or poison?) is spreading fast through his wound. Baby Yoda approaches and touches the wound. Hilariously, Karga thinks that the child wants to eat him. But actually, Baby Yoda uses the Force to close and heal the wound. Everyone is astonished by this miracle.

The next morning, as the group continues towards their destination, Karga suddenly turns on and kills his bounty hunters. He explains that the original plan was to kill Mando and take Baby Yoda to the Imperials. However, after the events of last night Greef Karga had a change of heart. Thus, he and Mando formulate a new plan. It is similar to the original, but with some differences. Cara Dune will pretend that she captured the Mandalorian. They will “turn him in” to the Client. From there, Karga will slip Mando his blaster and he kills the Client. Baby Yoda and Kuill will return to the Razor Crest. He will seal the ship and activate Ground Security Protocols. Meanwhile, the floating bed used to transport the child will still be part of the bait, albeit empty.

The first part of the plan goes fairly smoothly. Karga, Mando, and Cara meet with the Client in the cantina where Mando used to accept pucks from Karga. The Client begins to monologue, saying that all of this conflict was avoidable. He asks why Mandalore resisted Imperial expansion, arguing that the Empire improves every system it touches. According to him, safety and security has been replaced with death and chaos thanks to the Empire’s downfall.

After this monologue, the Client requests to see Baby Yoda. Greef Karga says it is asleep, but the Client insists they will all be quiet. This is the moment. Mando must make a move somewhere in the next few seconds, because obviously the child is not really in the container.

Before anything can happen, a stormtrooper tells the Client that a call has been received. It is from Moff Gideon, presumably the superior to whom the Client answers. He is played by Giancarlo Esposito, who also plays Gus Fring in “Breaking Bad.” That character oozed ruthless but calm competence and it seems Esposito has carried some of that into this Imperial character as well.

Moff Gideon asks about the child. The Client says that he is sleeping. “You may want to check again,” replies Gideon. He motions to someone out of view. Blaster bolts begin flying in from outside, and the Client is immediately struck. Team Mando is able to take cover from this onslaught.

The Mandalorian is able to carefully peek outside. There is a firing squad of Death Troopers — not common stormtroopers — standing out there. An Imperial hovercraft shows up and deploys stormtrooper reinforcements. Team Mando is now heavily outnumbered and pinned down.

Mando tells Kuill over the comlink to take Baby Yoda to the Razor Crest and leave. Unfortunately, their communication is intercepted by a pair of Scout Troopers, who mount their speeder bikes and give chase.

A TIE fighter descends on the stand off. The wings fold — I am unsure if this is standard for TIEs, because I don’t recall seeing that happen before. Moff Gideon exits and approaches the cantina. His outfit looks similar to the mysterious figure who approached Fennec Shand in the epilogue of the 5th episode. However, there is no spur noise… that is a mystery for another time.

Gideon tells them that they have no idea what they possess and that the child means more to him than they can ever know.

We cut away back to Kuill, who is nearing the Razor Crest. Mando is trying to talk to him, but the Ugnaught is focused. We see Moff Gideon again. In a few moments, he declares, the child will be his.

The next shot shows Baby Yoda on the ground, as a scout trooper swoops to pick him up. It looks as if he were dropped unintentionally.

The sad explanation is given immediately. We see someone smoldering, lying on the ground. It is the beloved Kuill, with his Blurrg mount lying next to him. I am fairly certain this is the last we will see of him, as he would not have given up bBaby Yoda willingly and the scout troopers would not have shown him any mercy.

This is where the episode ends. We will have to wait nine agonizing days to see the conclusion to this stand off. I was greatly saddened and provoked by Kuill’s death. He is perhaps the first meaningful death we have had on the show so far. Kuill was one of the first people to help the Mandalorian and he did so more than once generously. His famous quote, “I have spoken,” also became a popular meme. Not only must he and his Blurrg be avenged, but Baby Yoda must be recovered.

How will Team Mando acquire this victory? Well, IG-11 is still intact and aboard the Razor Crest. Perhaps he can provide air support with the ship, and/or engage on the ground with his blasters. Counting Mando, Cara Dune, and Greef Karga, there are four of them. I highly doubt any Mandalorians will show up since they had to move after their last intervention.

This penultimate episode wraps up the previously established loose ends, and sets up for us a fight between quality versus quantity. The battle that plays out will mark the conclusion of this entire season. Chapter 7 (“The Reckoning”) was directed by Deborah Chow, who also directed Chapter 3 (“The Sin”). I also reviewed that episode and was greatly satisfied with the way it ended. Hopefully, next episode will yield a similar result. If we have to wait a whole year for this story to continue, then send us off with a season finale for the ages. I have spoken.