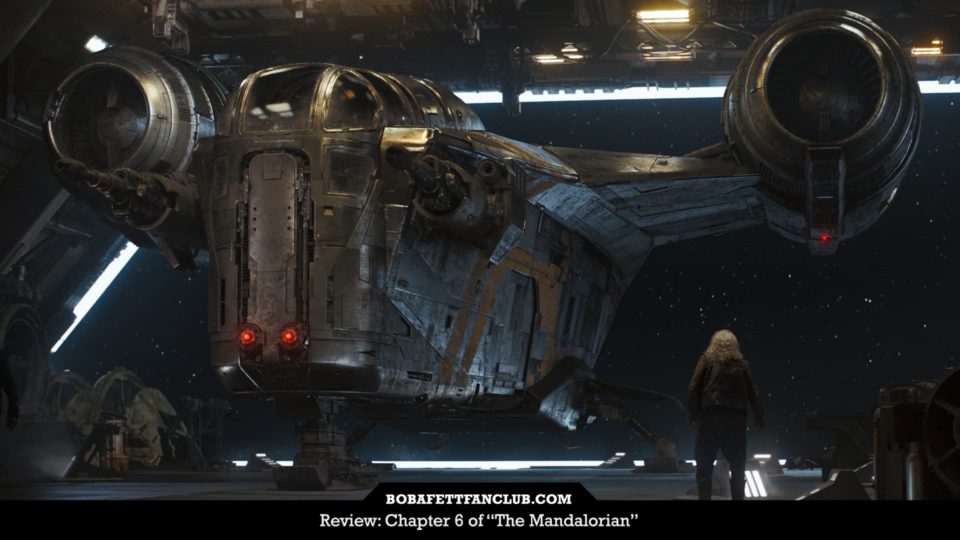 Review: Chapter 6 of "The Mandalorian"

I was looking forward to this Friday’s episode of the Mandalorian, wondering what kind of environment will amaze us this week. I was hoping maybe we’d take a trip to a new planet, or get introduced to some new species… see something different from what we’ve seen on the show so far in terms of scenery. Well, the sixth chapter of The Mandalorian, titled “The Prisoner,” doesn’t disappoint and takes place entirely in space, in an action-packed adventure full of industrial corridors and claustrophobic ships.

The episode starts off with the Mandalorian landing his trusty Razor Crest in a rickety space station in the middle of nowhere. As he walks around, he gets some nasty looks from the various workers attending the hangar. His people remain a feared mystery to everyone.

Since the Force is pivotal to Star Wars and we don’t get much of it in this show, it’s nice to see something else take its place and bring some mythology and higher calling to the world. He’s no Jedi, but the Mandalorian is still disconnected from the everyday reality of others by his helmet and the allegiance that comes with it.

A cordial man comes to meet our hero. He’s Ranzar Malk, a former colleague of Mando, and we quickly find out the Mandalorian has reached out to him, relying on the station’s “no questions asked” policy to keep off the Hunters’ Guild radar.

Right off the bat, the dialogue in this episode sounds better written and acted to me than in the rest of the series. And I mean by far. From what I’ve seen around the internet, many people think the exact opposite so I won’t dare to pass this off as an objective critique, but subjectively at least, the way the characters talk just feels much more natural.

Malk reveals that he knows about the Mandalorian’s breakup with the Guild, but assures him he doesn’t care and would, in fact, like his help with a certain job. One of his associates got arrested, but he is being transported by a New Republic prison ship (manned only by droids) soon and with a right crew, he might be rescued. Despite his friendly demeanor, Malk quickly shows his true colors and uses the edge he has over the Mandalorian to manipulate him into progressively worse and worse terms that the fugitive can’t really afford to refuse. It’s a cool change of pace and makes me feel like there’s a lot at stake here with the power dynamic it creates.

As for the crew the Mandalorian is supposed to join, while they are all quite unusual people, they seem to get along pretty well with each other, mostly because they’re all evil. We have a former Imperial sharpshooter called Mayfeld, who not only dual wields blasters but has a third, robotic arm strapped to his back, that gives him additional fire support. He’s the leader of the operation. We have a confident droid called Zero, who carries an EE-3 carbine rifle and is voiced by Moss from The IT Crowd, Richard Ayoade. I wish he had more screen-time, just because Ayoade’s performance was so amazing. Then we have a Devaronian called Burg and not much can be said about him except that he is the muscle of the group. And finally, we meet Xi’an, a hot-blooded Twi’lek female and knife enthusiast, who seems severely mentally unstable. Apparently, there’s bad blood between her and Mando now, but it seems they might have even had some sort of a fling in the past.

I though the characters would be awfully bland in this kind of story, but honestly, they were all great. Granted, they weren’t extra flashed out, but there’s only so much that can be done in forty minutes and I think this episode made more than a solid use of its time. Mayfeld especially stole the show with his surprising amount of personality depth. Bill Burr has done an outstanding job playing him and the man definitely seemed believable to me. Most characters acted pretty naturally and I wouldn’t have trouble to believe someone like them could exist outside the TV world.

From the very start, the crew is hostile to Mando. Taller and bulkier Burg finds him too short and immediately invades his personal space to intimidate him. Xi’an pulls a knife on him and demands a reason why she shouldn’t just kill him on the spot. Mayfeld never misses an opportunity to engage in a pointed one-upmanship with him. Half of it is just his personality, but he also seems to view the Mandalorian as a rival in more ways than one. The only one that doesn’t try to dominate our protagonist every heartbeat is Zero, but that’s mostly because he’s a droid and doesn’t care.

When the crew board the Razor Crest, that’s when the knives really come out. Those scenes are probably my favorite from the episode because they feel extremely real. They convey the exact mix of helplessness, rage and paranoia you would feel if you had a bunch of callous, juvenile jerks in your house and couldn’t get them out. The interaction between everyone is on point. They test him relentlessly, trying to see what they can get away with.

The dialogue in this show is making an intentional attempt to deviate from the usual nerdy Star Wars formula and get closer to what actual people on Earth sound like. This episode is the king of this ‘woke’ newspeak so far. Mayfeld calls the Mandalorian a “wise-ass” and later on, he’s a second away from dropping an actual F-bomb. I honestly don’t know how I feel about that. The insults the crew throws at the Mandalorian don’t sound like something a Star Wars character would say. They are too ugly, mature and aware for that.

I’d say the franchise is growing up fast and I’ll miss the innocence it portrayed even the worst things with. On the other hand, I absolutely love the conversation in the Crest and I believe adult Star Wars will come, maybe sooner than we think. I would just prefer it if they didn’t try to steer the characters specifically toward actual, existing swear words. It feels really weird in the Star Wars context. I’d be very interested to hear what other people think about this.

When they finally arrive, the Mandalorian has to leave Baby Yoda in the Crest with Zero, and board the transport with the rest of the crew to get the prisoner. He is obviously hesitant to leave his little green friend but after a while, he makes a decision and joins the others. As he jumps down the airlock into the prison transport, his theme can be heard for a second, signifying he is fully concentrated on his job now.

Speaking of which, many people didn’t like how “non-Star-Warsy” the music in this show is, but personally, I love it and it is absolutely excellent in “The Prisoner.” The camera work is also breathtaking in this series and the entirety of their stay on the ship is highly atmospheric. The sterile, symmetrical corridors and the lack of human crew make for an interesting, eerie setting.

The three friends and the Mandalorian manage to locate the prisoner, but only after murdering a lone Republic soldier overseeing the ship and accidentally activating a tracking beacon, that orders an attack squadron of Republic forces to destroy the entire vessel, so they need to get out before that happens. It turns out the prisoner is a certain Qin, Xi’an’s brother, that was apparently arrested thanks to the Mandalorian in the first place. The Mandalorian isn’t happy about the reunion and in the moment he is distracted, Burg pushes him into Qin’s former cell, locking the door. The gang leave for Razor Crest, not even bothering to kill him.

The next few minutes I really have nothing to say about except they were gorgeously shot and all around amazingly done. Mando escapes and hunts everyone down. We get to see a lot of flashing red lights, people chasing each other through long silent corridors and the fights themselves are unique, fun and tense.

After getting rid of all the others, the Mandalorian brings Qin back to Malk. As usual, he is received warmly by the man and gets his reward, but the moment he leaves, Malk sends a gunship to kill him. However, it turns out that Mando stuck the tracking beacon from earlier on Qin and three Republic X-wings that followed it through hyperspace open fire on the station, leaving the Mandalorian enough time to escape. The three pilots are played by The Mandalorian’s directors, Dave Filoni, Deborah Chow and Rick Famuyiwa, so that’s a nice cameo. Our Mando leaves the battlefield a richer, smarter man and an undeniable winner.

It’s a pretty cool finish but I have to wonder, if the squadron just follows the beacon wherever and destroys whatever the signal comes from, well, what exactly happens to the space station? Will all those random, unsuspecting people onboard just die now? Even if Mando did it in self-defense, that seems really mean, not to mention kind of inconsistent with his moral code so far.

In closing, despite the oddly cheerful dark ending, I find this episode to be amazing. I still hope the show will return to its serial roots, since I’m not that crazy about the episodic approach, but this a worthy installment by me. The dialogue was top-notch, characters were good considering the time they had to work with, and the sound and the camera were both on point. It managed to make me feel invested and there were some funny moments, too. This it probably my second or third favorite episode of the series so far and I can’t wait to see what’s next.