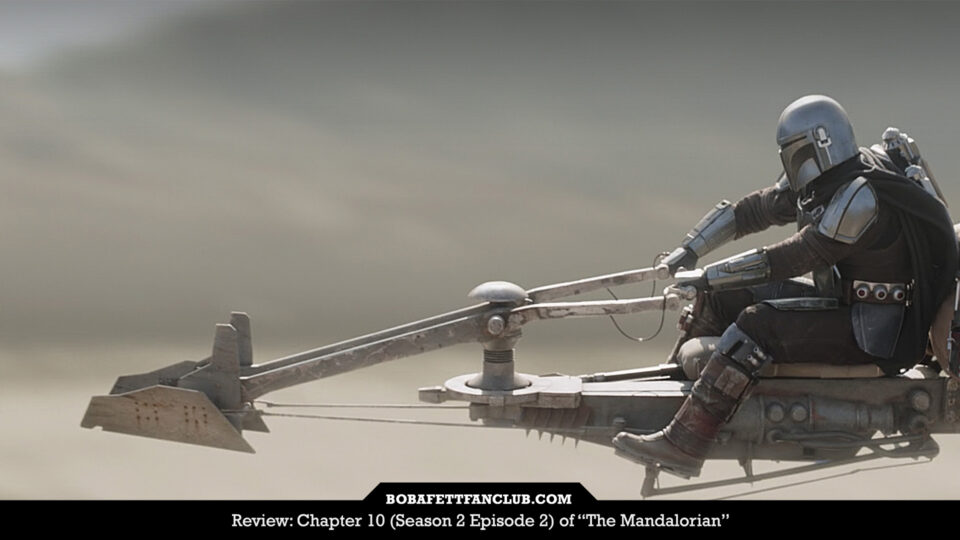 The final shot of the last episode left us an interesting revelation: what appeared to be Boba Fett watching the Mandalorian intently as the latter sped off with Fett’s armor on his speeder. I was hoping to follow-up on this, but Chapter 10 had different plans.

The Mandalorian gets his speeder ambushed by a handful of marauders who want to take both the Child and his equipment from him. After an intense brawl, Mando eliminates all but one, a short creature who puts a blade to the Child. Mando asks him not to hurt the Child, that he can help himself to the equipment scattered in the sands. The creature ends up taking Mando’s jetpack, and this proves to be a fatal mistake. Controlling it with his gauntlet, Mando uses it to launch the creature far into the air, and then the creature falls fatally to the ground.

Somehow making the rest of the trip on foot without fainting from exhaustion or dehydration, and carrying both his own gear, Boba Fett’s gear, and the Child, Mando makes it to the “safety” of Mos Eisley. He meets up with his contact Peli Motto, the eccentric mechanic and dock owner who has become Mando’s go-to contact on Tatooine. She is gambling, possibly playing Sabaac, with an insectoid creature in the cantina. As Mando explains that the lead on finding a Mandalorian was a dead-end, Motto mentions that “Dr. Mandible here” knows of a contact who can take him to other Mandalorians.

Back at the hangar, Motto uses a podracer engine to cook the Krayt Dragon meat, medium rare as it should be. She explains to Mando that there is a Mandalorian covert nearby, in the sector. However, he must transport the passenger to a location in exchange, and he must travel at sublight speed rather than use hyperspace. In other words, the ship will not simply blink from point A to point B, he will have to do it the hard way and manually fly there. This is slow and risky, so Mando tries to call the deal off because he believes he is safe only moving fast. Motto says that these are “mitigating circumstances,” and Mando sees exactly why. The passenger is of an amphibious looking species, or perhaps like a gecko. She has a tank of eggs on her back. The eggs must be fertilized before the equinox, otherwise her bloodline will end. If they travel through hyperspace, the eggs will die. Her husband has settled on the moon of Trask, in the system of the gas giant Kol Iben.

As the Passenger and Mando get settled, the Child sneaks one of the eggs and eats it. Mando should know better at this point than to leave the Child to his own devices.

The Razor Crest gets close to their destination, but it is intercepted by two X-Wings, serving the New Republic. They ask for the ship’s beacon/identification. Mando notes that the Razor Crest is pre-Empire surplus, and thus doesn’t need to run a beacon. One of the X-Wing pilots tells him that times have changed, and that the New Republic now has jurisdiction. Mando says he’ll get on it, and they exchange a friendly “May the Force be with you.” But then the pilot asks Mando to send out a ping, which I presume is to confirm where Razor Crest is going, or perhaps to ping the beacon or identification. If he cannot, then Mando will have to follow him to have his ship’s tabs run, which basically means that the records of the ship would be examined. Mando is not thrilled about this idea, because the New Republic would potentially recognize the Razor Crest as the vessel involved in the prison break mission of last season, where Mando and his temporary team of mercenaries had broken in and freed the Twi’lek criminal Qin. In fact, this is precisely what Mando then gets questioned about, and thus he has run out of options. Razor Crest dives into the planet’s atmosphere, with the X-Wings giving chase. There are only two of them and perhaps Mando could destroy them both. But then, he’d be even more wanted by the New Republic, and being hunted by them would only make his missions more difficult. Razor Crest plummets into a free fall, with the hopes of juking the X-Wings. The chase continues through an icy tundra, and it appears that by sliding into a large cave, Razor Crest is able to escape its pursuers. But unfortunately, this is only a temporary victory, as the ice beneath Razor Crest crumbles, and the ship along with its crew take a hard fall down into a hidden cavern.

Mando and the Passenger awake from having been passed out sometime later. The damage is bad. The main power drive isn’t responding, and the hull of the ship has gaping holes in it. Not to mention, it is getting colder as well. The Passenger tries to tell Mando something, but he doesn’t understand and says it can wait until morning. It was clear to me what the message was: the temperature of the egg tank is decreasing and the eggs could potentially freeze to the point of “death” or being unusable.

The Passenger is able to use the vocabulator of the droid Q9-0, from the aforementioned prison break episode. After being betrayed, Mando had blasted him, and his remains apparently stayed onboard the Razor Crest. The Passenger uses the droid’s vocabulator to explain to Mando that she wants him to hold to the deal that he agreed to. Mando tells her that the deal is off, and that they’ll be lucky to leave with their lives. I was expecting a far higher level of relentlessness from a “Mandalorian” bounty hunter, but maybe I’m simply confusing Din Djarin with someone else. “I thought honoring one’s word was part of the Mandalorian word…I guess those are just stories for children,” the Passenger tells him. Mando dismisses this, saying that “this was not part of the deal,” as he goes outside to inspect the Razor Crest.

While Mando repairs his ship, the Passenger sneaks off to a cavern containing a warm body of water, where she bathes along with her eggs. As Mando is putting them back into the tank, the Child tries to eat another. Mando stops him, so the Child instead turns his attention to the odd eggs that are growing all over inside the cavern. He opens one, and there is a hideous spider inside. The Child eats it, but this provokes the rest of the eggs into hatching. Our characters are now faced by a horde of savage spiders, varying in size. To make matters worse, the apparent mother or parent of these spiders shows up. She is quite large, certainly large enough to make a meal out of Mando and his companions. The group tries desperately to make it back to the ship, with all of the spiders in pursuit. Mando is able to kill many of them, including the large one, but it simply isn’t enough.

Since the ship is not intact, the spiders are able to follow the group aboard the Razor Crest. While Mando is dealing with a horde of them, some of the spiders harass the Child. The Passenger blasts them, saving the Child and allowing Mando to seal off the cockpit. The Razor Crest begins to take off, and it seems the group might finally escape. However, a very large spider slams onto the ship from above. This one is far bigger than the previous one I mentioned; it is big enough to rip apart the Razor Crest.

As the massive beast tries opening the cockpit, blasterfire erupts. It is the two X-Wing pilots from earlier, having located the Razor Crest. The large spider is killed and the other spiders who aren’t flee for their lives. The pilots tell Mando that they ran the tabs on his ship. They now know that it was indeed him who was involved in the prison break operation. However, their records also indicate that he captured three highly wanted criminals. They are referring to the remnants of that crew who betrayed Mando and tried to leave him to be captured. Instead, as you might have seen if you saw that episode last season, Mando turned the tables and left them aboard the prison ship to be captured. Furthermore, Mando tried to save the life of an officer from the New Republic Correctional Corps on that same mission. This earns Mando enough rapport that the pilots decide to ignore the arrest warrant out on him, at least on this occasion.

After sealing off the cockpit, Mando says that they can limp towards Trask. The final shot shows a very damaged Razor Crest, with much of the hull gaping open and exposed to space. Lastly, the Child eats one last egg that it had stolen.

Overall, I wasn’t really satisfied by this episode. I enjoyed it slightly more the second time watching it, but it was a slow burn either way and didn’t advance the plot to an interesting point. The one thing that I will give them credit for is the fact that past actions affected the present. In this case, the prison break episode from Season 1 had an interesting impact on the events of this episode. Unfortunately, there isn’t much dialogue given the nature of the characters involved. The Passenger speaks an alien language and the Child doesn’t truly speak, so it makes the Mandalorian seem pretty isolated. Also, I was disappointed not to properly follow-up on the previous episode, but hopefully that will be addressed later this season.

The mission depicted in this episode seems like a side mission, or filler. Each season of this show only has 8 episodes, so a filler episode taking up 12.5% of the whole season seems like a hefty price to pay. I wish they had at least reached their destination at the end, but this episode was almost 20 minutes shorter than the last. Although I wasn’t fond of Chapter 10, I do sympathize greatly with the Passenger. I wonder why she didn’t question the missing eggs that the Child had consumed. But in any case, I hope she is able to reach her husband in the next episode. Then, we can get going with moving the main plot forward.