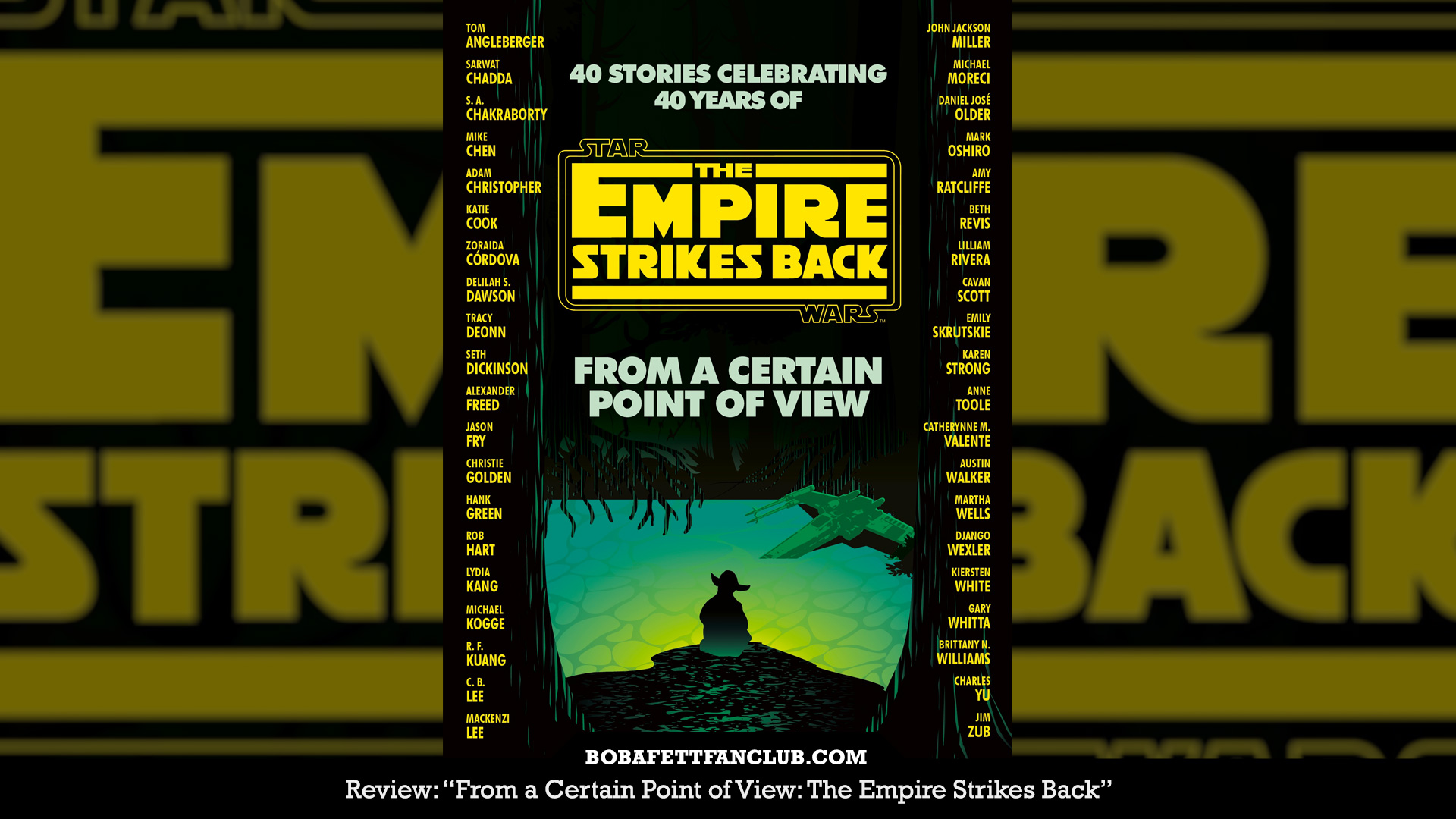 Review: "From a Certain Point of View: The Empire Strikes Back"

Just in time for the 40th anniversary of The Empire Strikes Back comes a new collection of 40 short stories that expand upon minor characters and events from the film. From A Certain Point of View: The Empire Strikes Back brings forth a host of stories – some good, some not, and some that are truly bizarre. It’s a perfect microcosm of Star Wars storytelling – not always a home run, but always shooting for the stars.

From a Certain Point of View: The Empire Strikes Back
Del Rey Books | 2020
AVAILABILITY

Wait For It by Zoraida Córdova

There’s a certain appreciation to be had for Wait For It. It attempts to thread the needle – showing a confident Boba Fett, tying in his relationships to the other bounty hunters from their appearances in The Clone Wars, making his prequel-era characterization tie into who he is as an adult, and even referencing events from the Darth Vader comics. It doesn’t always make these connections gracefully, but there is care in balancing the portrayal of Boba Fett – he’s not a calculated, silent badass, but he’s also not an over-the-top, cocky, and insufferable character. Sometimes the characterization dips a bit into one side or the other, but never fully.

I wasn’t a fan of the story’s use of colloquialisms. It’s not written in the first-person, but the narration tries to capture Fett’s persona. His reference to Darth Vader as “Lord Huff and Puff” and thoughts of “pounding a cold brew” was particularly cringeworthy, as were the grammatically incorrect internal thoughts (i.e., “He wasn’t no little kid anymore”).

Wait For It starts a little rough – I was definitely worried about Boba Fett’s characterization at first. But over the course of eight pages (it’s sadly one of the book’s shorter stories), his portrayal evens out. For Boba Fett fans, it’s definitely a step up from the cocky bro persona he was written with in Paul Dini’s “Added Muscle” short story in the “From A Certain Point of View” collection for A New Hope. Wait For It isn’t perfect – but there are kernels of greatness sprinkled throughout – particularly in showing how his childhood characterization influenced the man he became. It’s a side of Boba Fett that is ripe for exploration, and I really hope future authors pull this thread more.

This story is a bit of a tease. This isn’t a Boba Fett-centric story. This story follows an Imperial officer on a Star Destroyer’s waste disposal assignment. Obviously, it’s clear that he’ll run into Boba Fett. We all know the story – the Millennium Falcon floats away with the Star Destroyer’s garbage, only to be tracked by Boba Fett. But just how did the notorious bounty hunter find them? You’ll find out here. The story is great – well-written and with a brutal twist. Although Fett is a very minor character in this story, his portrayal is menacing. This is Boba Fett at his most ruthless – and this story showcases just why he’s the best bounty hunter in the galaxy. Longtime Boba Fett fans should be very pleased with this story.

Beyond the Clouds by Lilliam Rivera

Billed as a story involving Boba Fett, fans will be disappointed to learn that Boba Fett has the most minor of cameos in this story. This story was hyped as the story of a Boba Fett fan – and that’s not accurate. Isabalia is a wannabe bounty hunter, and she is desperate to meet him with the hopes that he will take her under his wing and train her. She’s not so much a fan of Fett as someone who recognizes who is the best in the business – and to Isabalia, that person is Boba Fett. The rest of the story, told from the first-person narrative, is decidedly disappointing. Isabalia can’t decide what path she wants to take in life while she’s slowly caught up in a work stoppage on Bespin – something we never see happen in the films. Outside of some of the familiar Star Wars trappings, this could be any sci-fi story. There’s nothing that makes this story special or memorable in any way. It misses the mark, and that’s made worse due to the Boba Fett bait-and-switch.

Overall, I found the quality of stories found in this collection to be much better than the collection for A New Hope. For me, there was roughly an even split between stories I really enjoyed and stories that I didn’t. But in a collection of 40 short stories, not every story will be a winner.

The Bizarre (Your Mileage May Vary)

From A Certain Point of View: The Empire Strikes Back goes on sale today, November 10, 2020.