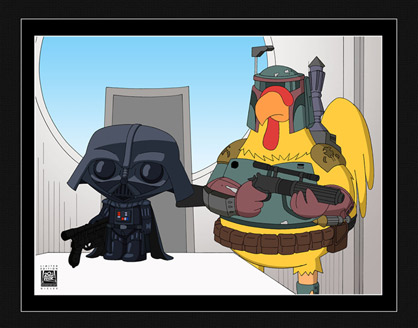 According to an interview with the show's writer, Kirker Butler, c/o GalacticBinder.com, the Slave I will have chicken wings. (Thanks to Family Guy fan site, Stewie's Playground for the link.)

KB: That is true. Our animators even designed the Slave 1 to have chicken wings. Brilliant. Our animators, by the way, are some of the best in the business and most of them are also huge Star Wars fans, so their contributions have been invaluable. They deserve as much credit for the success of these shows as the writers do.

You can watch the trailer in higher quality on Apple.com.

The episode is first available on DVD and Blu-ran this December 22nd. It'll be broadcast on Fox next year.

Giant Chicken, also known as Ernie, is highly likely to get into a big fight. Fans of the show will know what we mean. You can learn more about the character on the Family Guy Wikia.com site.

We first reported the episode back in October 2007 on our message boards. We also blogged about it and linked to some Giant Chicken clips on YouTube.

Props to ScreenRant for highlighting Boba Fett in their post.