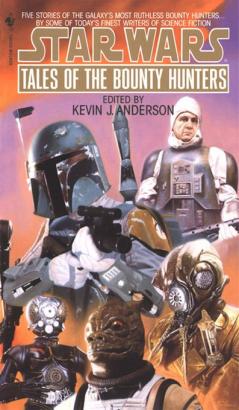 Author Daniel Keys Moran created Jaster Mereel, the identity behind Boba Fett before things took a turn (for the better or for the worse) with his backstory. Moran created Fett’s moral code, starting with “A Barve Like That” in Tales from Jabba’s Palace and then in “The Last One Standing: The Tale of Boba Fett” in Tales from the Bounty Hunters, both edited by Kevin J. Anderson and published by Bantam in 1996, the same year this web site began. BFFC moderator Eric Cromwell interviews the author, finding out more about his creative contributions to the post-Jedi storyline for Boba Fett.

I’d like to first acknowledge to readers that you were a science fiction author for some time before becoming involved in the “Star Wars” brand. From being published in Isaac Asimov’s Science Fiction Magazine to your own novels, I was wondering if you could just mention how you got involved with the Star Wars books and how you specifically landed the Boba Fett assignment on Tales of the Bounty Hunters?

If I recall, my then-wife (possibly then-girlfriend) Heather McConnell, who was also my editor at Bantam Books, suggested me to Kevin J. Anderson. I was a big Star Wars fan and I jumped at the chance to write Star Wars, despite the money being so-so. I wrote a piece for Tales from the Mos Eisley Cantina, which Kevin liked, and then wrote “A Barve Like That” for Tales from Jabba’s Palace — that was about Boba Fett as well, though I ended up putting a pseudonym on it– J.D. Montgomery. Somewhat to my surprise, Kevin then asked me to write the Boba Fett piece in Tales from the Bounty Hunters, despite the problems with “Barve” — and after clarifying that I was really going to get to write what I really wanted to write, I said yes. And Kevin protected that story and it was published the way I wrote it, with genuinely trivial changes here and there — I owe Kevin one for that.

What attracted you to Boba Fett?

Strong, silent, brutal. A little Man With No Name thing going on there that I liked. He was a nearly blank canvas with striking presence — a guy even Darth Vader had to hold back. That one line from Vader — “no disintegrations” — gave Fett his street cred.

I was wondering how you came up with the name of Jaster Mereel and if there were any influences building that character? Perhaps other literature or films?

No idea where the name came from. It was me, but beyond that, don’t recall. As to influences on the character, mostly Westerns, which I like — easily half my top 10 favorite movies are Men on Horses (Or Camels. Or Motorcycles.) Boba Fett would have fit into the Sergio Leone/Eastwood saga with no real changes except costume. A little Torquemadea, too — that scorched-earth fundamentalist worldview (my addition, that) — that sense of utter moral certainty that drives the people who talk to God…

Can you tell us what was altered in your other Boba Fett story “A Barve Like That: The Tale of Boba Fett” in Tales from Jabba’s Palace that made you publish it under the pseudonym J.D. Montgomery? And was it the first “Fett survived” story out there? Either way, what compelled you to bring this story to life?

I believe it was close to being the first official “Fett survived” story. There was a previous piece of official fiction, I forget by whom, that had a barely-living man being found just outside the Sarlacc. The guy who finds him assumes it’s Fett. I didn’t want to use that — I wanted to leave Fett down in the Sarlacc for some years, as the Sarlacc, which was intelligent, slowly digested him. We’d explain away the other guy as someone misidentifying Fett — who that other guy would be we’d have had to work out. Lucasfilm didn’t want to go for it, so I was stuck with Fett down in the Sarlacc for only a day or two. Beyond that, Lucasfilm decreed that the sarlacc couldn’t be intelligent — that was pretty much the breaking point for me. I stuck an alien down in the sarlacc, named him Susejo (O Jesus, backwards) … had Fett fight with him for a bit and then climb up out of the Sarlacc. I don’t think it was a really bad story — but I don’t think it was good, either.

Nearly twenty years ago now David Gerrold picked up a movie novelization I did and asked me if it was any good. I hedged: “Parts of are pretty good.” “Ah,” he said. “Perhaps you could go through and circle them for me.”

I didn’t feel like circling the bits of Barve that I thought were OK. So I stuck a pseudonym on it.

What attracted me to the story as I envisioned it? The nightmare of a strong man dying a slow death across years, losing his sense of who he was piece by piece — Alzheimer’s, anyone? — and then a final shot at life long after he’d accepted the inevitability of death — you can’t do complex things in short stories, but that was a story worth telling even at a short length.

Long after I wrote that story I ran across a really great scene in a Stephen King novel, “From a Buick 8” — the novel crosses a generation, and in the first half a strong man is busy being the chief of police; in the second half that same guy is going down with Alzheimer’s, and his men come to see him and he has a moment of clarity and says to them, “Boys, I’m in Hell.”

I wanted to send Boba Fett to Hell. Instead he had a bad couple days in San Bernardino.

What is your take on the fact so many Boba Fett fans still prescribe to the idea that this bounty hunter has his own moral code, as I believe first detailed in your story?

Not a surprise and not really due to me. Bounty Hunters as moral agents is pretty stereotypical stuff. Or “archetypal,” if you like. I’ll take credit for the fierceness with which Boba Fett believes in his Code — men living by a Code has always been of interest to me. (There’s a long post about this at my blog so I won’t spend too much time expounding on it here. And it talks about the Star Wars stories at some length, as well.) This wouldn’t be an archetype if it didn’t resonate with people.

The difficult thing with Fett was finding a worldview for him that permitted him to proclaim a Code — given the stark Evil that permeated the Empire, Fett pretty much had to be either 1) Evil, or 2) an incredibly unforgiving, harsh, “greater good” sort of guy. The second approach worked and has resonated with some readers.

What is your outlook on this character now after having contributed to his growing popularity?

Don’t know that I contributed much, to be honest with you. The entire universe of Star Wars literature is a little ancillary to what Lucas has put on screen. I have three sons — 5, 8, 11 — all perfectly clear who Boba Fett is, but I don’t know if any of them know I once wrote stories about Fett.

Part 2 of our interview with Daniel Keys Moran