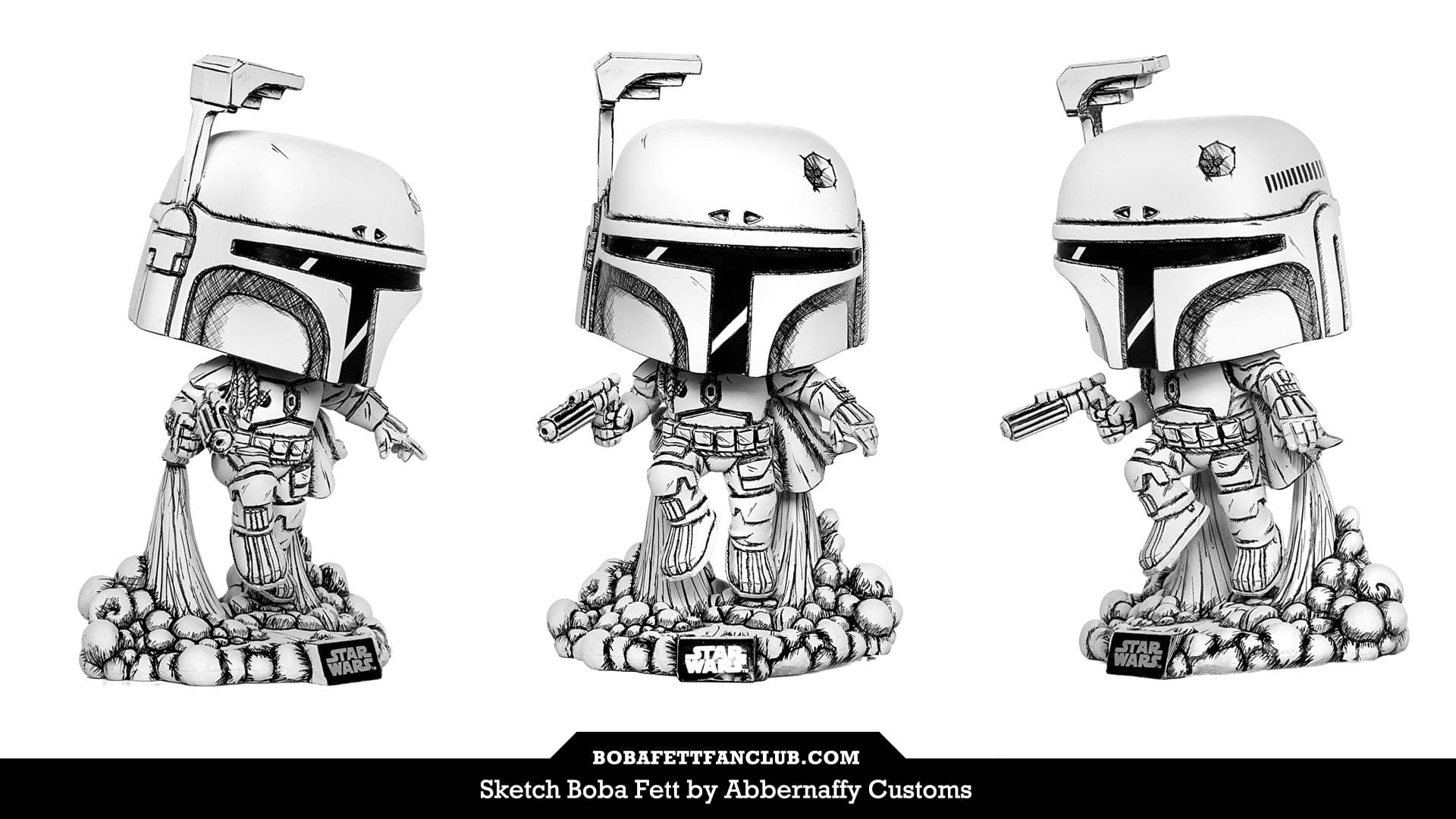 Jazz legend Miles Davis has been quoted as saying “Sometimes you have to play a long time to be able to play like yourself.” This well known quote was specifically referring to musicians, but the underlying principle can easily be applied to any given category of artists. Mastering the technical skills of one’s chosen craft is certainly paramount, but an artist’s ability to develop and establish a style distinct to themselves is truly what sets them apart from their would-be peers. One such artist who has clearly achieved that in the custom toy world is Alan of Abbernaffy Customs. 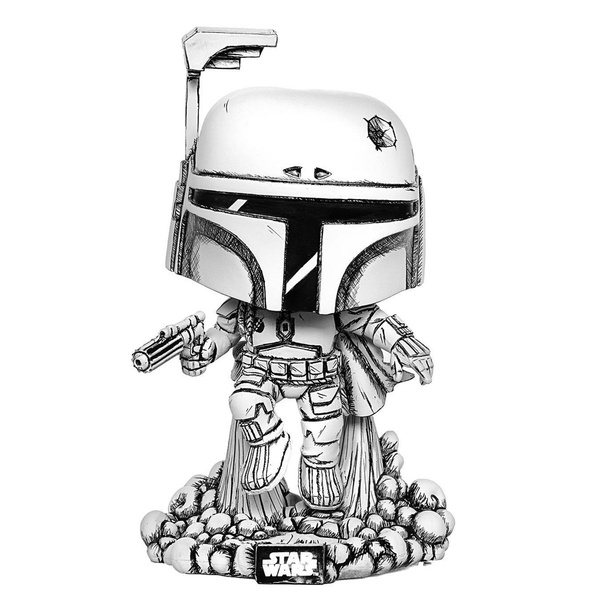 Our first exposure to Alan’s work was a Sketch Boba Fett based on a Smuggler’s Bounty exclusive Boba Fett Funko POP! bobblehead, initially brought to our attention by our good friends at the Boba Fett Fan Club. Even at a glance, we knew this was something profoundly different from the plethora of custom vinyl figures out there, and this was only one of Alan’s many distinct styles. His body of work is as extensive as it is unique. We actually have yet to see his portfolio in its entirety, as his Instagram feed is so long that our browser keeps crashing while attempting to reach the beginning. Even then, there was clearly plenty to see for fans of just about any genre you can think of. Just focusing on the character of Boba Fett alone boasts unique styles such as rusted silver, block shadow, Planet X, sketch glow, Freddy Funko, and even this distinctive Headless Jango Fett (warning: mild gore). To say that this is only the tip of the iceberg is a comical understatement of epic proportions. That we recommend a thorough look through the Abbernaffy Customs portfolio goes without saying, and we hope your devices will handle displaying his Instagram feed better than ours did. You won’t regret it.

Alan’s artistry and workmanship is perhaps eclipsed only by his kindness and humility as he generously shared his experience, insight, and thoughtful advice with our readers in his interview below. To cap off with another quote, Albert Einstein once mused “Why is it I always get my best ideas while shaving?” Today, this amusing thought has become a classic illustration of how a wandering mind can stimulate brain function and capacity. Alan shares his own version of that phenomenon with us as well, and we are sure you will find it as humorous and inspiring as we did. Enjoy! 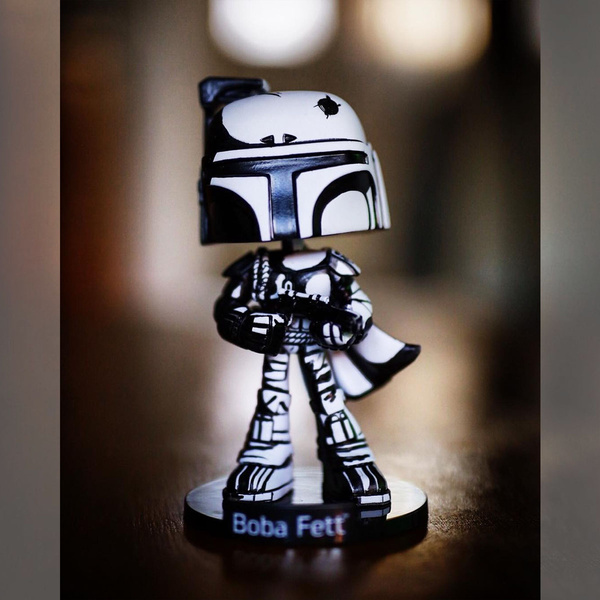 What are the top three interesting facts about yourself?

I’m from Glasgow Scotland. Not the craziest of all facts, but a lot of fans I’ve had have thought I was based in the US. My previous job to customising was working as a UK-wide product specialist for Canon Cameras. It was quite the career change when I decided to start making toys instead of learning all about the working of cameras. I have a 9 year old son who basically gives me the seal of approval on all of the customs I make. If he doesn’t give me the “wow” reaction then I know the custom needs more work!

How did you get your start in customizing toys?

I’d love to give some sort of inspirational origin story as to my beginning in the custom world, but it was a series of unfortunate events that set the wheels in motion for this path I’ve taken. It started back when I first began collecting. I was new to the community and pretty naive. I was introduced to customs though Facebook groups and fell in love with the idea that people could make their own toys, and I purchased a custom from one of the custom makers in the community. I paid a fortune for it and then I waited around eight months for it to arrive. Finally when it did I was so disappointed with the quality of it that it made me a little sour with the idea that I’d waited so long and paid so much money for it. So I figured you know what, I’m going to make my own customs and I’m going to make sure I don’t disappoint people the way this guy disappointed me. My first custom series I made was my metals series. I was laying in bed one night and I was staring at the Superman Pop sitting on my bedside cabinet. I figured he would look really cool if he looked like he was made of brass. So I made it happen. I shared my custom with the community and they really took to it. I didn’t expect anyone to like what I made, as admittedly my stuff wasn’t great when I first started. But I kept going and trying different things and evolving my styles. Ultimately, I had seen so many different customizers around the groups who were all known for their particular style so I wanted to create my own style that when people see it, they would say “Oh, that’s Abbernaffy’s”. I was laying in bed one day and I was looking at my Pops and I thought, “how cool would it be if they looked like they were a drawing on paper?” Then I thought how cool would it be if they glowed in the dark and you could see the sketch really pop then! That’s when my sketch series was born. Since then, that style has became the one I’m most known for! 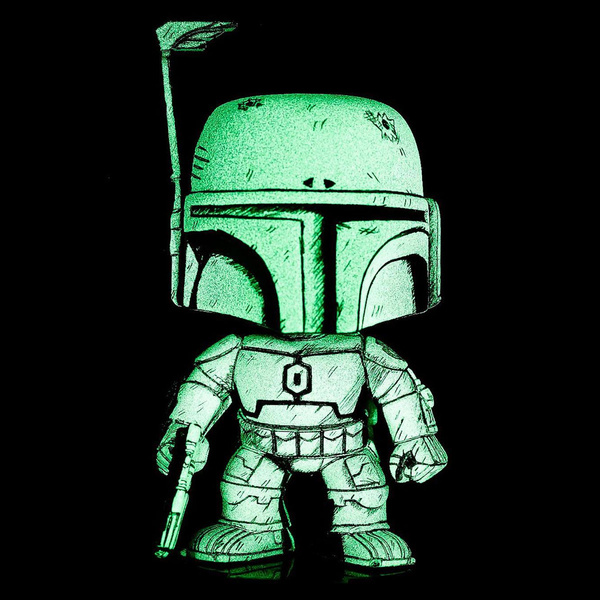 You have done many sketch customs prior to your latest Sketch Boba Fett Funko Pop. What do you find most enjoyable about this particular style?

The sketch customs are super satisfying for me to make because I genuinely can’t draw to save myself. If you give me a piece of paper and ask me to draw something, you’ll get a stick man in return! Yet when I make a sketch Pop, I can make it look like it’s right off the page. So it’s always been weird for me seeing what I can create on a Pop that I couldn’t create on a piece of paper. I also still geek out when I make my glow sketch versions and they light up in the dark. It’s so cool seeing a glow in the dark 3D drawing sitting on your shelf.

You have previously done quite a few Boba Fett-based customs in general. Is it safe to guess that you’re a Boba Fett fan?

So here’s where the fans get their pitch forks out: I love Star Wars, but I’ve never really considered myself a diehard fan! That being said, I’ve grown up with these movies and being a kid, I stuck to the coolest-looking characters like glue! So Boba Fett and Jango Fett were just the coolest characters in my eyes. I used to have a Jango Fett figurine when I was a kid and I NEVER put it down so I have fond memories of that character. I also enjoy making the Fett customs because it’s actually really hard to make it look bad. Plus there’s a little satisfaction in making something that I played with so much when I was a kid into Pop form! It’s basically a nostalgia blast for me! 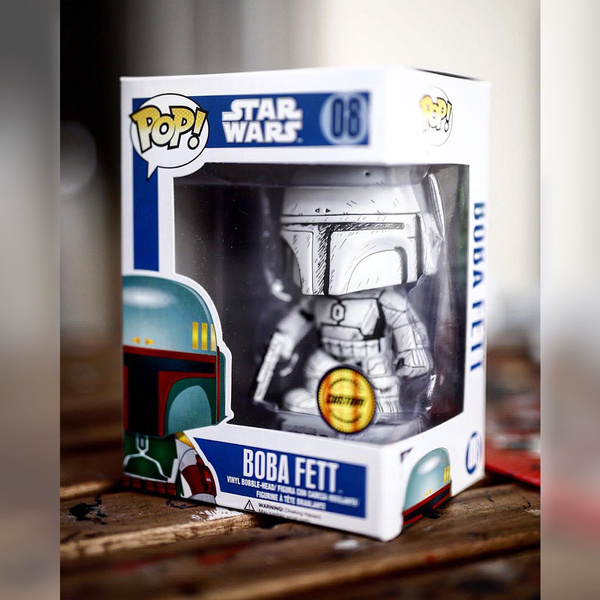 Where and how do you draw inspiration for each custom piece you create?

You may have noticed a trend with most of my inspirations. I tend to come up with these ideas when I’m laying in bed trying to sleep! I have a bad habit of going into contemplation mode when I should be sleeping. I always end up thinking “Wouldn’t this look cool on a Pop?” More times than not, I actually get up out of my bed at midnight and start trying out these ideas. A lot of my inspiration also comes from the fact that I’ve immersed myself in geek culture for most of my life, especially with Star Wars. As much as I’m not a diehard fan, I love the Expanded Universe and the stories you don’t get to see on the big screen. I always think how cool it would be to see that represented in Pop form. I’ve got plans to make some of the Expanded Universe Jedi and Sith into Pops in the near future!

What is your dream goal as a custom Pop maker?

You know, I’ve never really thought about my future in the customs business. I’ve really only went with the flow for as long as I could. As far as my future as an artist, I’d absolutely love to make my own vinyl line. I’m currently in the concept stage of making my own. I’m basically just brainstorming the ideas I have swirling around in my head and trying to form them into a cool looking product! If ever I do manage to make my own stylised vinyl figures, you can bet your bottom dollar that I’ll be including many Star Wars characters in the line!

What is the most important piece of advice you would give to an aspiring toy customizer?

I have to say, one of the daily challenges I face as a customizer is having people ask me for all my tips, tricks, and secrets on how I make my customs look as slick as they do. I actually get a lot of stick for it because I choose to keep those parts private. There’s a reason for it though. The biggest advice I can give to any artist is to do the hard work. Go through the frustrating trial and error part of the journey as that’s what makes you as an artist. That’s what helps you define your own path and artistic style! The whole point in being an artist is to find a way to channel your own creative ideas and manifest them into something physical. It would be easy for someone to message an established artist and have them tell them exactly how to make art like they make it, but then you’re doing nothing more than simply walking in the shadow of someone who’s already established. Don’t walk in anyone’s shadow. Put in the hard work, the late nights, the anger, the pain, the frustration, and the pride when you progress and the satisfaction when you look at something you worked really hard to make and think, “Wow, I made that.” I suppose my advice summed up would be that a lot of people want to get to the finish line without running the race by piggybacking other runners, but the race is the fun part! Embrace it and enjoy it! 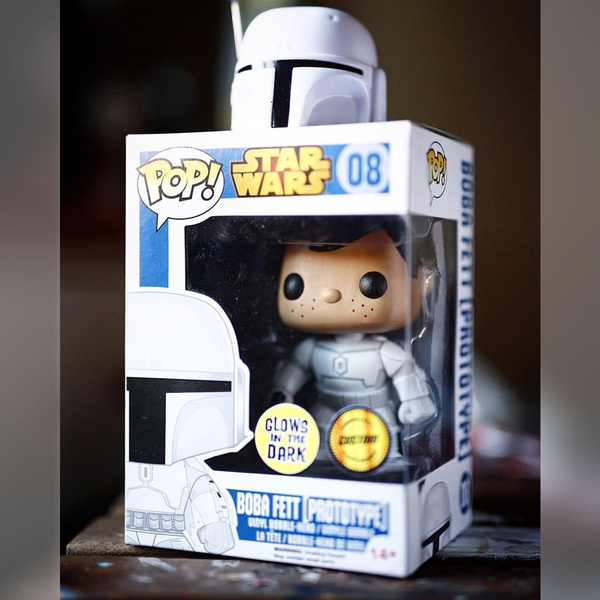 Alan of Abbernaffy Customs is a toy artist from Glasgow Scotland. He enjoys making toys from geek culture’s biggest names, and is a Star Wars fan who loves making Boba Fett and Jango Fett custom toys. Alan’s work can be found on both Instagram and Facebook. 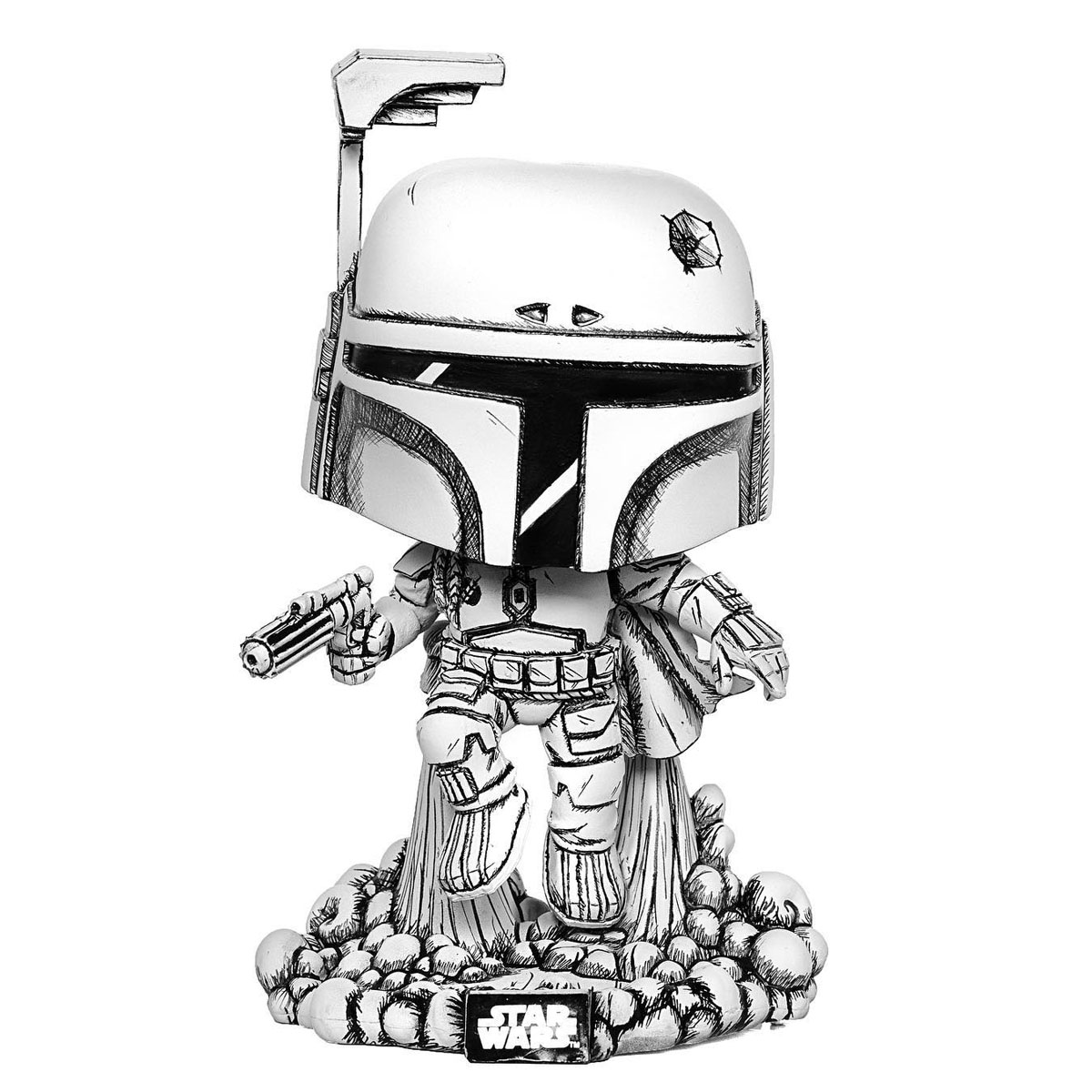