As part of a new feature here at the Boba Fett Fan Club, we'll be conducting interviews with Fett fans that are friends of BobaFett.com on our Myspace or Facebook.

Hi A'den! To start off, tell us a little about yourself.

My name is PJ. I'm a 32 year old father of 2 and I work as a Police K9 Officer in Southern California. I started costuming about 3-4 years ago by upgrading Rubies costumes. Last year I built my first set of Mandalorian armor, Jaing Skirata from the Legacy of the Force books, who I costumed as at SDCC 2008 where I had the joy of participating in the Mandalorian Wedding of Xyon and Zarah Koreen. Currently Jaing has been retired, due to the helmet being signed by Kar'buir (Karen Traviss) at SDCC! I know costume as A'den Skirata, Jaings Null ARC brother. His look is my interpretation of him in his beskar'gam. I am a member of the Sun Raider Clan of the Mandalorian Mercs Costuming Club where I am a member of the Cuy'val Dar Council and the Personnel Officer. 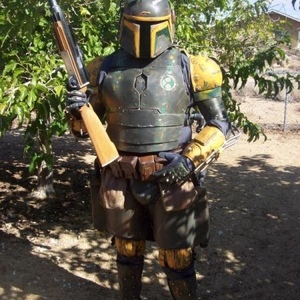 How long have you been a member of the site?

I'm a new member to the group [BFFC] and it's great! Any community that fosters (or festers! LOL!) fandom of the greatest bounty hunter EVER (Yes, better than Dog!) is a great place to call home! Kandossi!

What initially made you a fan of Boba Fett?

Initially, I thought Fett was cool looking but, that he was a "punk" after the way he "died" in ROTJ. As years went by, and I became more involved with reading the Star Wars EU [Expanded Universe], I really took a liking to Boba Fett. When Karen Traviss established a true "back story" to Fett and the Mandalorians as a group, I jumped in head first!

What is something you have learned from Fett that you can apply to your every day life?
"No disintegrations!"

What's your favorite Fett line (from the films or not) and which Boba Fett do you prefer (original trilogy Fett or post-prequel Fett)?

"I've killed virtually everything that moves, one time or another, a hundred different species, sentient and dumb; if it breathes I've probably killed it or something like it. But I've killed clean. I've killed without stretching it out."

As far as knowing Fett, I prefer his most recent appearances in the LotF [Legacy of the Force] books. As for his appearance, I prefer what I believe is referred to as the "Hero" armor by costumers... The ESB helmet with the ROTJ armor.

What is your favorite Fett EU (Expanded Universe) appearance?

Definatly, LotF. Although, I enjoyed his duel with Darth Vader as well [in Enemy of the Empire].

Lastly, what do you hope to see in store for Boba Fett in the future?

Well, after Troy Denning did such an excellant job of destroying everything that Karen Traviss had built up in the final book of the LotF series, I'd like to see Fett save Mandalore and not die from some punk virus he's too damn cool for that! With Fett at it's helm, Mandalore needs to build it's power and stay to itself until the Mandalorians are once again needed to come and bail out the galaxy in another war. When Fett's death is revealed, I want him to go down in a blaze of glory! Not old and crippled or at the hands of a virus.

PJ, thank you for for coming by the site and also for adding us to your friends on MySpace!

Remember we'll be spotlighting random fans that add us on Myspace or fan us on Facebook!