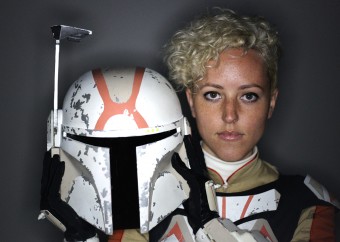 What is your name and who are you cosplaying as?

My name is Emma, but I go by RoboEmma on Tumblr and the greater internet! I’m costuming as Sabine Wren from Star Wars Rebels, and my custom Mandalorian character, Ivven Oyre.

What groups/clubs/sites are you a member? What is your handle for those sites?

I am a member of the Mandalorian Mercs; I go by Vhe Oyre on those forums. I’ve haunted that place for a good 6-7 years now, and served on the Application Team for a while! It’s been a very rewarding experience to watch the club grow. I was also just recently approved as an X-Wing Pilot in the Rebel Legion, so that’s very new to me! 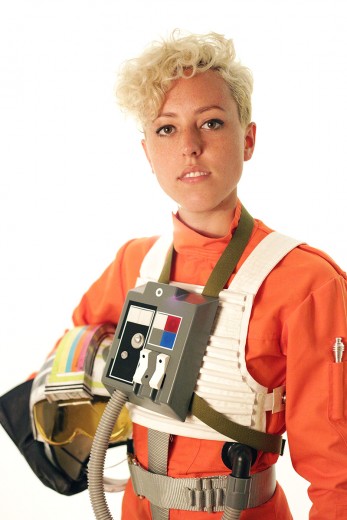 Why this character and costume? What’s the story?

As for Sabine Wren, the choice to make her costume seemed obvious: I’d been obsessed with Mandalorians and I’ve costuming as a custom one for years, so when Dave Filoni started giving us these awesome canon Mandalorian women like Bo-Katan and Sabine, I eventually couldn’t resist; it had been so long since I’d made a Mando. Sabine spoke to me almost immediately: I’ve always been partial to good guys (Go Rebels!), she wore pink, like my custom Mando, and she was a sassy artist-type and I’m an illustrator, too. I related to her instantly, even though her character design took a bit to grow on me. Now I love it, especially the checkerboard shoulder ala Biggs Darklighter. Once I saw her operating on Star Wars Rebels, I had to have her.

In terms of my custom Mando, I love the creativity that comes with making original characters. I’ve always had a million OCs wandering around my head, and I’ll always be drawn to my own, personally-created characters. I picture Ivven as a grumpy, cold-hearted type who travels around the galaxy with her KOTOR-style crew as a high-risk smuggler of sorts. 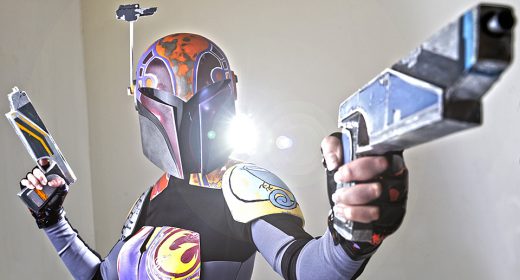 What has been one of your most memorable experience as this character?

Sabine was a new experience for me. As someone who usually costumes as unrecognizable custom characters, wearing a timely, relevant, and popular new character was a trip. It was amazing wearing her at Celebration Anaheim; the reactions were so positive, and I was blown away by all the little girls who were so excited to get their pictures taken with me. That, and I got to hang out in the AMAZING Mos Eisley cantina set at Celebration with a Hera costumer for like two hours. I never wanted to leave. It was so immersive.

As for Ivven, I’ve worn her for so many years at this point, that the memories are starting to blend together. Honestly, I think the moment when I first saw a picture of myself in the costume after just finishing it, and thinking, “…Wow. I look so… cool!” after worrying myself to death over whether it turned out or not, was one of the more memorable moments. Traveling in groups of
custom Mandos is pretty great, too, every time it happens; I love hanging out with other Mercs.

What were some of your challenges to get your costume just right? 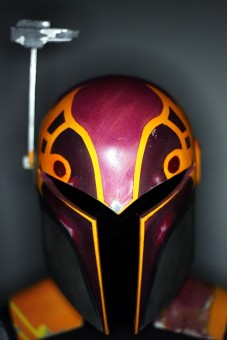 I went into building my custom Mando with very little costume experience, and that was a lot of hand-skills to learn. It took a while to simply understand quality, in order to judge whether things were up to par. I literally learned to metalwork to make Ivven, because I knew from the start that I wanted to make her out of 18 gauge aluminum. It took a good year or two and a failed Mandalorian costume in order to be good enough at metalworking to finally make a quality kit that all came together. That, and the chest plates, and getting them to fit my figure the way I wanted. That took a while to get right, understandably.

As for Sabine, the challenges of translating a cartoon rendering to a real-life equivalent was rather trying; cartoons rarely give you seams or realistic models. Sabine was the first time I had to learn Sintra or real leatherworking, so that was also a learning curve; I’m getting better at picking things up the longer I costume, though, so that wasn’t too bad. I made absolutely everything on her costume from scratch, including the patterns for the cloth parts. The biggest challenge with Sabine came down to time: I was on a super tight budget, and was literally still painting her 15 minutes before driving to the airport for her first convention appearance. Somehow, I pulled it off! Sabine’s paint scheme is super detailed and particular; painting was definitely the biggest challenge, in the end, and getting all the lines clean, while also factoring in time for it all to dry.

What advice do you have for other cosplayers?

Advice? Everyone sucks when they start. My first costume (another Mando) was a big hot mess. Don’t ever be afraid to scrap every single piece and start from scratch. Persistence and a stubbornness against giving up will get you places. If you don’t have talent, you can learn talent.

After about 6 years of costuming, I am at the point where I know I can do anything if I am willing to work until it’s right. I can learn any skill I don’t have, and so can you. Be a perfectionist, but wear an imperfect costume. It’s about fun. Never let something like that keep you from wearing your costume. Only make the characters you love. You don’t need a ton of money or a ton of support to make great costumes. You’re never done upgrading. Join a costume club; the opportunities and communities they open to you will blow your mind.

What is your favorite Star Wars moment from the films, books, comics, games, etc.?

Oh gosh. Don’t make me choose. If we’re talking the films, the moment where Han swoops in and clears the way for Luke to blow up the Death Star, and Luke’s reaction to scoring the hit; that build-up of the music right before it blows. Episode IV is my favorite, just for that scene. I to this day can’t watch that moment without getting breathless.

As for everything else, I started with the EU and moved to the movies, so it’s hard for me to narrow that category. The Revan reveal sticks with me pretty hard. Right now, though, I still haven’t picked myself off the floor after hearing Rex’s voice in the big Rebels Season Two trailer. So yeah: that moment at Celebration Anaheim where they premiered the trailer and revealed Rex was back, and I nearly busted my knee plates and rangefinder when I slid out of my chair. That’s my current favorite Star Wars moment. The clones mean so much to me.

Thank you Emma for taking the time to answer these questions for us! Be sure and tune in to Star Wars Rebels on Disney XD on Saturday, February 18th to see Sabine Wren confront her mother on Mandalore! 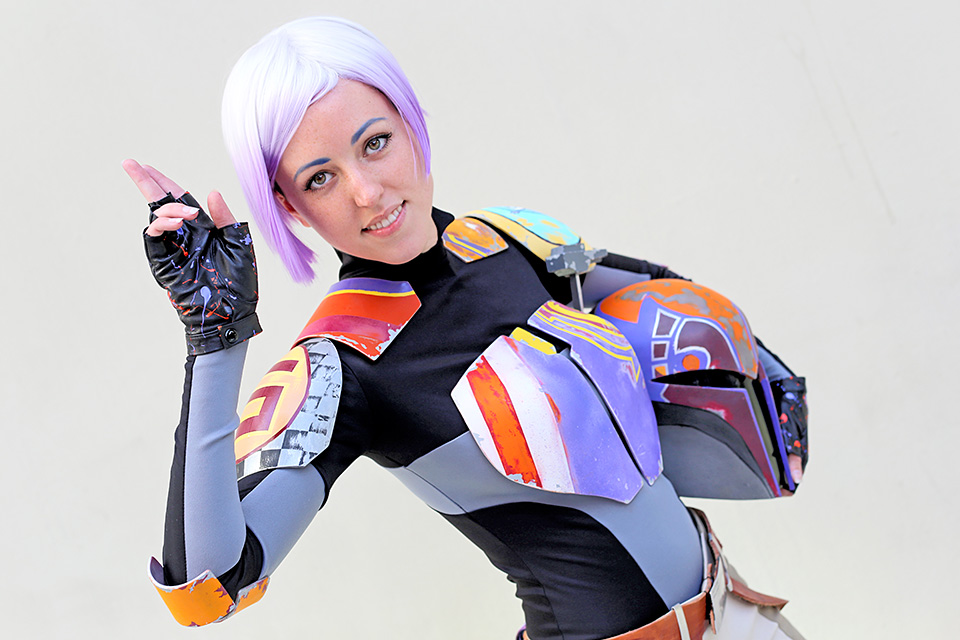