“True analysis is born out of enjoying the sound of ones own voice.” – Cujo

Join Cujos’ journey as he reviews all Fett comics that dropped before Star Wars Episode 2. So forget the future because life is too short not to live in the past. Meet oldschool Boba as no one has ever looked at him. Revel in my inane observations. Without further ado- i give you… 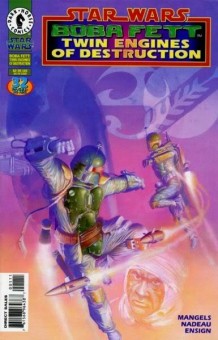 Noteworthy 411: This comic originally dropped as a four parter in Wizard Magazine. Later winning a readers poll of “best individual comic book”. A proposed prequel comic about Kast and Dengar was scrapped- a moment of silence…As I started to research this comic I started to see a trend of proposed and scrapped comics and novels, causing some discord among fans and franchise during this time.

Cover Art Dissection:
This cover leaves me a shade conflicted to be honest, i love the subject matter but the composition seems a bit convoluted to me. An artist is often told where to direct the viewers attention- and it just seems to be too busy to me…but the more i stare at it- yeah im feeling the flow, and the color palette choice is nice and fuzzy. It is a fine table setter- Boba vs Jodo: lets do this!
4/5 Disintegrations

Star Wars Timeline:
Fett has had enough time to shake off the rust, of the debacle at the Sarlacc. This Comic drops us in a chaotic galaxy after the empire has been scattered by “these guys”.

Comic Summary:
Well this is your classic identity theft, revenge, buddy comedy. Oh, you need more?
Enter Jodo Kast a copycat hunter donning the Mando armor, the imitation is not flattering to one Boba Fett who has a mind to do something about it. Fett does not take Kast lightly planning quite a reception for his “clone”. Along for the ride is everyones favorite comic relief “Dengar”…when Did Fett and Dengar get so cozy? Do your homework. These two have history and make quite a fun pair. Alas Kast jumps through many hoops to arrive at a show down with Boba- Bring the popcorn this battle delivers.
Bad A** moment: Bobas declaration in this frame. 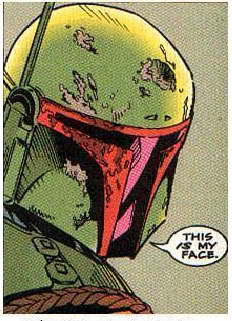 Fett insight
How do you make the galaxies coldest bounty hunter even colder? Drop him in a slow digesting, sand burrowing arthropod- yeah, that will ruin your day.
To the point- Andy Mangels has his finger on post Sarlacc-Fetts pulse, The Fett that I love anyhow. Cold, Calculated, sans the Kiwi accent and not prone to dropping cheesy one liners…I’m looking at you “shadows of the empire comic -Boba”. A coincidence(or is it?) worth mentioning is the fact that Boba fires a poison dart into someones neck…sound familiar? Perhaps Jango’s dart into Zam’s neck is an homage. I think the contrast between Fett and Kast should be discussed, it is an arch-typical theme. Old vs. New, Coke vs Pepsi, Teacher vs. Student dynamic, and Youth is always arrogant, quick to overlook the experience of age. This is an effective device and Mangels spins it deftly. A Choice that I found somewhat odd was the fact that when Boba is using an alias, he goes out in public dressed like a mummy, Really? Fett walking around looking like someone toilet papered him. I guess I just thought he would have a cooler alternative uniform, a space janitor uniform would be a step up.

Random Comic 411
-Jodo Kast is left handed, Boba is right handed.
-Kast refers to Fett as “relic” or “fossil”, and his Jetpack rocket as “baby”.
-Bobas’ Xbox gamertag is “Sarlacc Food”…joke, sorry- that is Dengars pet name for Boba.
-Jodo has some stylin’ sideburns.
-Boba refers to Dala as well as Shysa, nice continuity tie-in.
-Kasts’ ship is called the Foxcatch and is actually pretty tight.
-“The Hundred Club” is a list of the top bounties in the new republic. 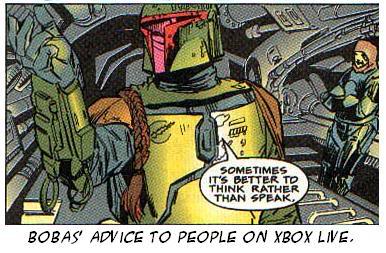 Bonus 411!
The theme of Mando identity theft is a reoccurring one in the Star Wars universe.
-In the book Tales of the Empire, Grand Admiral Thrawn wore Kasts armor and impersonated him during a secret mission on Correlia.
-In a Tales comic No.18 (100% Fett issue). A human named “Risso” steals Fetts armor and impersonates him before Boba treats him to a savage beating.
-In Star Wars No. 68 Fenn Shysa was mistaken as Fett by Princess Leia and later receives a kiss, score one for the Mandos!
Story: 5 Disintegrations

Comic Art assessment
Well to be honest the story is the real star in this comic, but if the story is chocolate-the art is peanut butter. The action is articulated well, and it feels like Fett, while he is not invincible his fighting is resourceful, and brutal. It is easy to distinguish between the two mando clad hunters. One thing i would really like to bring attention to is the frames where the reader is looking through Boba or Jodo T- visor and what he sees- in a word awesome.

If there is a knock on anything art related is that in some frames Boba Fetts head is not in proportional to his body, a venial sin.
Art: 4.5 Disintegrations

Should you get this comic?
I remember coming across this comic in a Star Wars bin at my local comic store about seven years ago and was so giddy I read it in the parking lot in some sweltering heat I might add. So let me lay it out like this for you, Get this comic- As Fett comics go this is the grail. nuff said.

Another review of TEoD comic with insight and wit.

What Wookieepedia has to say on the comic.