“Of all the things I’ve lost, I miss my mind the most.” -Erma Bombeck

Join Cujos’ journey as he reviews all Boba-centric comics that dropped before “Star Wars Episode 2”. So forget the future because life is too short not to live in the past. Meet old-school Boba as no one has ever looked at him. Revel in my inane observations. Without further ado, I give you… 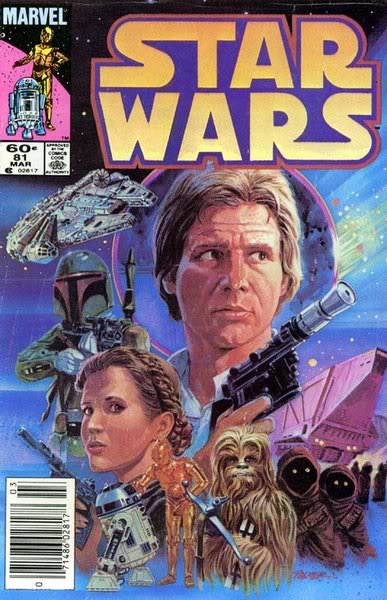 Get to know Mary Jo Duffy! Traviss, Bulloch, Logan. These are all Fett house hold names; let’s add another to that list. Star Wars Comic #81 is the first appearance of Fett since his unfortunate plunge into the Sarlacc, which makes “Jo Duffy” the woman that would raise Boba from the grave. However inauspicious the appearance may be, Fett fans should recognize the woman that revived Boba Fett. This is the first comic to drop after RotJ.Comic Pack 411: This comic was given the honored treatment of a Walmart exclusive comic pack – including a reprint of the comic and figures of “Goo” covered Boba And RA-7 droid.

Cover Art: Well the cover is nothing if not classic Star Wars art. A collage of the characters grace the cover. An adequate cover, forgettable if not for Boba who can be seen striking a familiar pose. 2.5 Disintegrations

Star Wars Timeline: This comic opens the morning after the destruction of the second Death Star. The Rebels have just partied the evening away on the forest moon of Endor – apparently there is no party like an Ewok party. 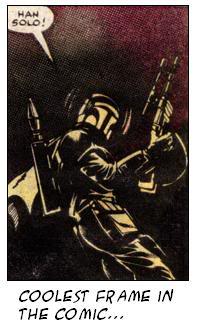 Comic Summary: This is a Han-centric comic. While Luke, Wedge, and Lando are shaking off a heavy night of partying with the ewoks. Solo is concerned with one thing: getting his money right. It seems that Solo is a little light on credits and is generally feeling restless. Leia is quick to loan Han some money, but any self respecting scoundrel wont accept hand outs! So its off to collect some credits from where else…Tatooine.

Meanwhile a certain bounty hunter has liberated himself from a certain Sarlacc and his unconscious body is collected by some scavenging Jawas. Han’s attempts to collect his credits are denied and as he grows more irritated he realizes that R2-D2 is missing, apparently some Jawas have taken the adventurous droid. Raise your hand if you think Boba and R2 end up in the same sandcrawler. After some grand theft landspeeder, Solo and Leia catch up with our sticky fingered Jawas. Solo makes his way on to the Sandcrawler and is confronted by an amnesia-stricken Fett. I won’t waste your time with the details of their confrontation, but I will tell you that Fett ends up helping Solo and R2 to freedom while depositing himself back into the Sarlacc. Yes, back in the Sarlacc. Making this something of a cyclical comic, of superfluous events.

Fett/Solo insight: Might as well discuss Solo as well as Fett here, since they are seemingly two sides to the same coin. The issues in this comic are somewhat mature in regards to Han Solo (as most of us can relate to): being a little short on cash. This problem seems to bring out the worst in Solo as he “borrows” a couple of landspeeders eventually wrecking them. And his overall demeanor in the comic is rattled and without his cinematic swagger.

On to the Fett man, well, it’s tough to really discuss Fett on account of his amnesia. So lets talk about that!

“Hi my name is Amnesia”: There are two types of amnesia – Anterograde, Retrograde (which is what Fett has in this comic) and even “explosive amnesia” in Futurama.

Reader Participation! In the comment section below, feel free to add your favorite fictional character that has had amnesia!

OK, back to Boba. For the majority of his appearance, Boba is out of it. The Jawas and an RA-7 droid speculate if he is a droid or cyborg. When Fett does come around, he is holding his head in confusion wondering what is going on. After Fett’s memory is jogged he snaps into action, but it’s too late.

Comic Epilogue: Rather than dissecting the art in the comic or the story separately I will kill two birds with one: WTF. A comic is a balance between art and story this comic seems to care very little about either. The characters likeness from Solo to Fett are somewhat sloppy and to be honest not really on par for this era of comic book. There are a few frames of decent Boba action but it is a fail.

The story itself is not bad but as they say “the devil is in the details,” and these details are suspect to say the least, here is one example: An entire sand crawler falls into the Sarlacc, logistically that’s kinda impossible. There are many other events in the comic that leave a discerning reader at a loss but I’m done here. Overall grade: 1.5 Disintegrations

Should you hunt this comic down? Ummm, no. just no.