Join Cujos’ journey as he reviews all Boba-centric comics that dropped before “Star Wars Episode 2.” Forget the future because life is too short not to live in the past. Meet old-school Boba as no one has ever looked at him. Revel in my inane observations. Without further ado, I give you…

“Those who ignore history are doomed to repeat it.” — George Santayana 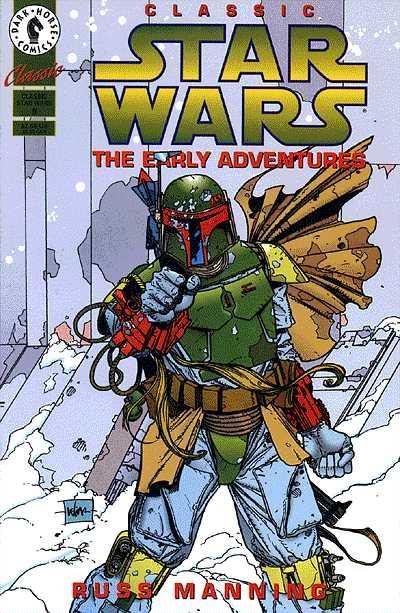 Classic Star Wars “The Early Adventures” is a reprint of the original Boba Fett comic appearance. The original was entitled “The Frozen World of Ota” Adventures of Luke Skywalker. This was released as a syndication in the Los Angeles Times, August 10, 1980.

“The Frozen World of Ota” was the last comic strip written by the legend Russ Manning who past away in 1981. When poor health forced Manning to abandon the strip, his assistant, Rick Hoberg, and inker, Alfredo Alcala. As I read the comic you can see a subtle grafting of art styles together. The cover artwork for the comic re-release was done by none other than Kilian Plunkett. Coloring for the Strip was done by Ray Murtaugh.
A Note about Russ Manning: This Comic legend now has an award named after him for “Most Promising New Comer Award” given out at “San Diego Comic Convention” annually.

This black and White Newspaper strip, later colored for this comic book, was released after the notorious “Holiday Special.” This second appearance of Fett, was an attempt to capitalize on this awesome new antagonist for the alliance. By the time ESB came to theaters many Star Wars fans already new who Boba Fett was. While There is much Star Wars saturation these days back in the day this was all that the thirsty fan had.

Boba Fett on a comic cover equals awesomeness, and Kilian Plunkett has long been a favorite of mine, his Star Wars credits include “Shadows of the Empire”. I like the pose of Fett on the cover, a sort of menacing pose of him getting ready to fire one of his wrist weapons “…if it weren’t for you pesky kids” like cover. I do have a few issues with the cover though, Bobas body mass seems too large, perhaps it is Dengar inside his armor. Aside from some liberties taken with the armor and some of the colors are botched, the art done quite stylish. 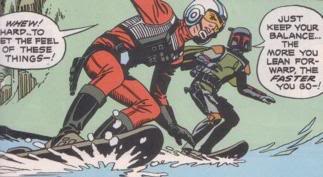 Boba by the numbers

Uses kneepad weapons: 1
gives someone a lesson on Snowboarding: 1
brags about his armor and/or weapons: 4

The comic opens on Luke Trailing a a damaged Tie Fighter through a frozen canyon on the planet of…you guessed it “Ota”. It seems Skywalker is reluctant to destroy the damaged fighter because he wants to scavenge it for parts, yes i thought it odd as well. After some questionable piloting both ships crash, Fett is introduced as the pilot of the Tie fighter, Guess the Slave1 was getting a new stereo installed. Fett is of course tracking a bounty named only “the mole” a traitor of the empire. Fett and Skywalker are both captured by the planets primitive inhabitants “Snogars” who basically ask them to fix their heater. Luke seems to be down with the cause but Fett cannot be inconvenienced with altruism, with Boba its always about the credits. After Boba drops some exposition about how they can escape, the odd pairing make an escape without much resistance. Of Course where Luke is Han and gang are soon to follow, and Ota is no different. Han and Chewie fall into traps of their own.

C-3PO tells off a gang of Snogars, but wilts under pressure. Now it is up to the unlikely pair of Boba and Luke to liberate Han and crew from Snogars, Although Fett has other ideas. As one might assume a struggle Between the rebels on the scene and Fett ensue. After the dust clears our favorite bounty hunter has lost his query and is left at the mercy of the angry natives…Will he escape? Stay tuned.

In this comic Boba is both arrogant and wreckless, and many fans have said him to be out of character. One of the devices of this comic is to create a history between Fett and Solo. I find it interesting this is the second time including the “Holiday Special” that Boba and Luke worked together, I’m curious if this was a conscious decision by the writers? Fetts Wrist Flame Thrower seems to be his go to weapon in this comic. He is a beast in hand to hand combat, at one point taking on Luke, Han and Chewie all at once- and talking trash while doing so.

This is a unique comic to critique on account of the collaboration between the three artists, and the all three artist approach drawing Fett in a slightly different manner. Here are the three different artists styles of drawing fett, notice the shading styles:

Early in the comic Boba’s helmet looks like a straight up bucket, while later it starts to have more menace and character to it. While the character art is simple the resemblance to the actors is tight. Action scenes in the comic are drawn pretty well, if not a little stiff. Im a big fan of older newspaper type comic strips, it seems to take my mind back to simpler times.

Should you get this comic?

If you wanted this comic, you probably already own it-because it has been out for a while, but if not- I would say that story aside and a really out of character Boba Fett, there is alot to admire with the Russ Manning artwork. But alas I can’t really recommend it. 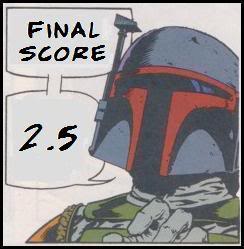