Fett is all over Robot Chicken: Episode II

LAist.com has an interview with Meyer:

What I like about the special though, is that there's a storyline throughout, it's got a lot of fun stuff, but we tailored it so that it tracked instead of being just a bunch of sketches. It just kind of came about, we all started doing a lot of Boba Fett and a lot of bounty hunter sketches and a lot of Emperor sketches. Two of the sketches that were fan favorites from the first special were the Emperor phone call sketch, and the Boba Fett sketch. It's always fun to write for Boba Fett because he's the coolest man on the planet and the Emperor is the grumpiest man on the planet [universe!]. Having written the Emperor sketch, I was very proud that it was such a fan favorite. I was kind of giddy that it was received so well.

If George knew how big that guy was going to be he never would have killed him off in the Sarlak [sic] pit, which is something we address on the show. It's the same thing with Darth Maul in the later movie, he's the coolest character George created in 15 years, and he gets split in half by Rob Roy, and you're like "that's it?? I'm not going to see him again??!!"

Boba Fett has become the coolest character in movies. He's a badass! When I got to voice him I was very very excited. We have one sketch, I believe it's called "The Greatest Sketch Ever Written", and I don't want to give too much away, but it's basically: what if Boba Fett hadn't died, and what if Boba Fett ruled? It's the exact sketch every fan boy ever wanted to see.

With the promise of a bounty hunter driven storyline, you can bet your sweet podracer that you'll be seeing more Boba Fett, previously shown in the original as a narcissistic show off. Senreich promises that the sequel "digs deep under [Fett's] mask" to reveal more about his psyche.

"Boba Fett's a complicated character," said Green of the fan favorite bounty hunter, voiced by Breckin Meyer. "A lot of people have projected a lot of characteristics on top of him."

Senreich admitted that the first sketch of the new special, which focuses on Boba Fett, is his favorite. Green also adds that fans of the first Boba Fett sketch will be incredibly happy with the latest effort.

I love our Emperor character to death but I think Boba Fett stole the show at the very beginning. The Boba Fett opening might be what I love the most.

Channel Guide Magazine has a quote from Seth:

Ã?'Â¢Ã¢Â‚Â¬Ã...Â"IÃ?'Â¢Ã¢Â‚Â¬Ã¢Â„Â¢ve always been fascinated by that tableau on the [Star Destroyer] Executor bridge of the six bounty hunters, one of which is Boba Fett, who ultimately captures Han Solo,Ã?'Â¢Ã¢Â‚Â¬Ã‚Â Green explains. Ã?'Â¢Ã¢Â‚Â¬Ã...Â"Who are those guys? How did they get there? Do they have agents? Did they answer an ad? Do they know each other? Why just these six? Do they have competitions amongst each other? Is Boba Fett always the victor? Those kind of questions, it just seemed like a great platform for comedy.Ã?'Â¢Ã¢Â‚Â¬Ã‚Â

Finally, here's a Fett-only teaser for the show:

(via Confessions of an Animated Mind) 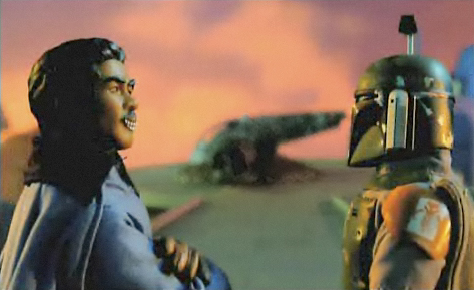