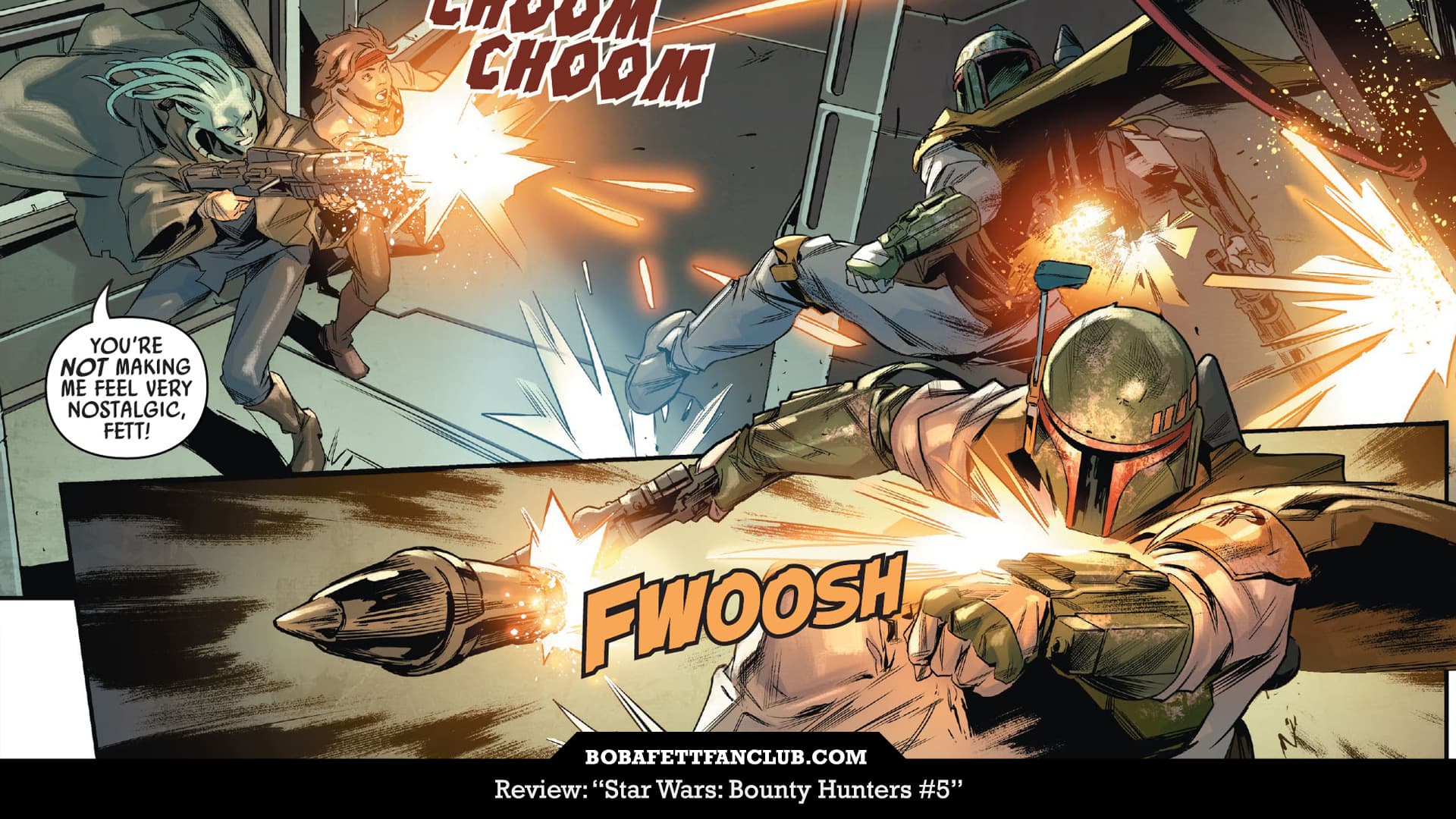 Although the last issue of Bounty Hunters left us at a cliffhanger, Star Wars: Bounty Hunters #5 starts with a flashback. We see Glee Anselm, the homeworld of both Nautolans and Ansemli. Nakano Lash is present as a child, which means this flashback is decades in the past. Her father and pregnant mother are with her. Lash wanders away from them and comes across an Anselmi extremist. These individuals hate Nautolans. Lash’s mother rushes to defend her, and in the ensuing fight Lash’s parents are killed. Some hours later, she is found by other Nautolans, who muse that “the galaxy is a cruel place for an orphan.” This quote brings us back to the present, and is perhaps the reason why Nakano Lash chose to defend Cadeliah, the orphan and heir of both the Mourner’s Wail and Unbroken Clan crime syndicates.

Boba Fett, who has cornered Lash, Valance, and Cadelish, asks Lash if Cadeliah is the reason that Lash betrayed the bounty hunter team on that fateful mission years ago. Lash tries to explain who she is, but Boba Fett doesn’t care. “Nothing you say will stop me from executing you,” he states. Valance decides to intervene, both to defend Lash and to avenge the death of T’onga, the bounty hunter who in turn wanted to avenge her brother T’ongor’s death. T’onga had been killed by Fett at the end of the last issue and the beginning of this confrontation. 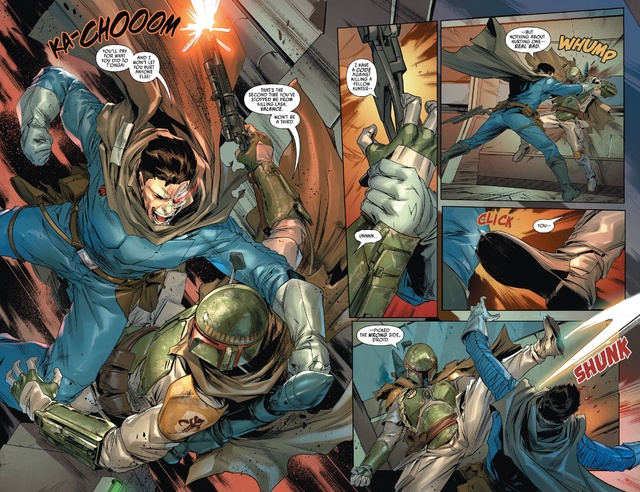 Valance rushes Fett, and with his great cybernetic strength is able to slam him against a wall. Fett retaliates by activating the spikes on his boots and kicks Valance in the face, cutting him in the process. It reminds me of the kick Boba Fett uses in the original LEGO Star Wars video games. Although this was an interesting move, it causes little damage and Valance blasts Fett with his palm blaster, hard enough to send Fett flying headfirst down a chasm. Valance leans over the rail to check on Fett, and Fett flies up and uppercuts Valance while using his jetpack to gain momentum. Fett then shoots his whipcord to tie up Valance, similar to what he did to Luke Skywalker in Return of the Jedi. But this time, Fett has an added surprise. “Built this bioenergy disrupter with you in mind,” quips Fett as the whipcord activates a current and zaps Valance into submission. It seems the disrupter is especially effective against cybernetics.

While this epic duel is happening, Lash tries to get Cadeliah to flee, but she does not want to abandon Lash. As Valance lies smoking on the ground, Fett tells Lash that she deserves to die for her betrayal. The panel transitions from present to past in an interesting way. It shows a close up of Fett’s helmet, with Lash’s reflection in his visor. Then the past panel shows the same shot of his helmet, but with a young Valance reflected in the visor instead. I’ve noticed these issues have a lot of panels that transition this way.

In this flashback, we are treated to the final sequence of events that completes everything we need to know about the botched mission and the immediate aftermath. We once again see T’ongor informing the rest of the team that Lash has killed their client and that they need to leave immediately. But this time, we follow the action from the point of view of Valance and Fett, Fett says that Lash just got them all killed, and that he will return the favor. Valance is in disbelief that his mentor would betray the team, but Fett believes that turning in proof of Lash’s death would cause the syndicates to let him leave alive. Boba Fett uses his helmet’s antenna and a stolen stormtrooper blaster- an E-11- to take aim at Lash. Before he can shoot her, Valance pushes Fett, throwing off his aim. Instead of hitting Lash, Fett shoots and kills T’ongor. This kill was seen in the previous issue, but we did not know who fired the shot. Lash herself assumed that the team had missed an enemy sniper on the way to their target. But it turns out that Fett himself was the shooter. Both T’ongor and T’onga suffered the same fate, and ironically it was Fett’s shot on T’ongor that would lead to her being blasted by Fett as well, years later.

Fett is very displeased and headbutts Valance with his helmet. Suddenly, Unbroken Clan members show up, and Fett wonders what kind of mess Lash got them involved in. They capture Valance, but Boba Fett is able to fly away with his jetpack. Valance is about to be tortured by the Unbroken Clan, but another transition panel happens here, showing an Unbroken Clan member from that past scene, then one in the present. They have caught up to the bounty hunters and plan to wipe them out. The Unbroken Clan leader, Vukorah, does not want anyone rivaling her power and plans to kill Cadeliah along with the hunters.

Back aboard the ship, Lash is trying to fend off Boba Fett with her blaster, while Fett retaliates with a wrist rocket. The explosion doesn’t kill her, but is enough of a diversion that Fett is able to seize her tentacle-like hair. Lash is able to once again slam Fett into a wall, and says that he is not one of the people she regrets hurting. She spitefully states that Fett escaped Corellia unscathed. “You damaged my rep that day,” replies Fett as he unsheathes a combat knife. He tells her that nobody does that and lives, then brutally stabs her abdomen. As he retracts his arm to attack again, he is stopped by Valance. Valance hits Fett hard and repeatedly in the head. It seems that his remaining strength is not enough to overcome the protection of Boba Fett’s Mandalorian helmet. “You…can’t…beat me…” Fett stammers as he proceeds to light Valance on fire with the flamethrower housed in his Mandalorian gauntlet. The damage is devastating and Valance screams in pain as he is once again subdued. 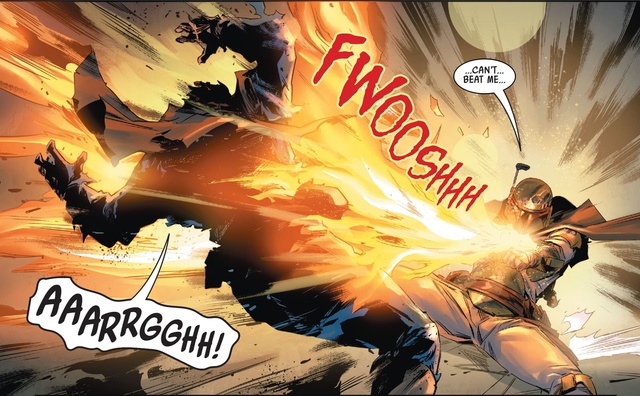 As Fett turns back to lash, the proximity alarm of the ship goes off. The Unbroken Clan is opening fire with their own starship and destroy the reactors of Lash’s ship. The ship begins disintegrating and a piece of debris separates Boba Fett from Lash. Fett says he’s done what he came to do and decides to escape the doomed ship. Valance rushes to aid Lash and tries to move the debris. But it is too heavy and Valance has depleted his power cells during his fight with Fett. Valance tells Lash that he only wanted to save her, the way she did when she rescued him from Imperials. He remarks that no one else ever saw him as more machine than man. Lash tells him that he is more human that anyone she has ever known. I thought this was a touching moment because it is obvious that he struggles with his identity as a cyborg. Valance is forced to flee as well, and is able to get himself and Cadeliah aboard his own ship, the Broken Wing. Both the Slave I and Broken Wing are able to escape Lash’s ship, while Lash presumably dies aboard it. The Unbroken Clan takes note of the escaping ships. Vukorah wants to confirm Cadeliah’s death, so she pledges to hunt down both ships.

Valance tells Cadeliah that he promised Lash he would protect her. Cadeliah asks him what their next move is. He replies that he doesn’t know, but that he will take her someplace safe. We also briefly see Boba Fett back aboard the Slave I. The profile of Han frozen in carbonite is reflected in his visor, implying that Fett will now deliver Solo to Jabba the Hutt, having completed this side mission to eliminate Nakano Lash. The last panels says that Valance will seek out help from someone he hasn’t seen in a long time, and with that this first story arc seems to conclude. [Editor’s Note: The comic’s illustrator added “…for now…”] 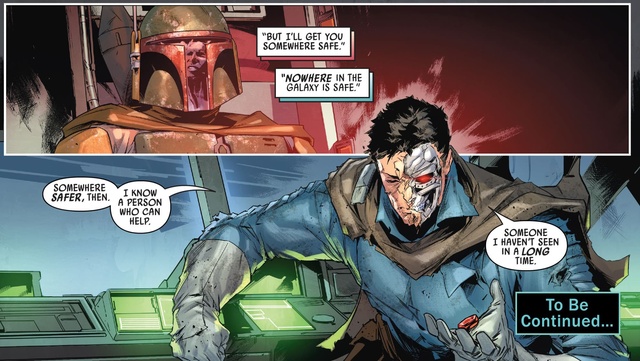 I greatly enjoyed this comic. It might be my favorite issue from this Bounty Hunters series thus far. We finally got to see the full story of how the past mission on Corellia fell apart, so all the pieces finally fell into place. We also got to see Boba Fett in action, something that is a rare opportunity. The duel between Valance and Fett is both epic and unbiased. Neither fighter did anything stupid for the sake of plot armor, and we got to see Boba Fett using his Mandalorian arsenal to devastating effect. Fett fights in a manner that is both exotic and versatile, worthy traits for the best bounty hunter in the galaxy. Valance is also a beast for being able to at least hold his own against Boba Fett. It is admirable that he fights to protect those he thinks deserve it, like Nakano Lash. He was willing to risk being killed by Fett just to save her.

It’s also notable that Valance is conflicted about his cybernetic enhancements. This is a trait that originates from his original appearance in the Marvel Star Wars comics. These comics, classified now as Legends and not part of official canon, show Valance being hired to hunt down Luke Skywalker for the Empire. He catches up to Luke and defeats him, since Luke is still inexperienced at this point. However, C-3PO stands between Luke and Valance to try to save him. Valance is taken aback by this, and even more so when Luke tries to shoo 3PO to safety. Touched by this bond between droid and human, Valance turns on the Empire and duels Darth Vader alone in order to allow Luke to escape. He sacrifices himself in the process. This selfless act, from a certain point of view, earns him resurrection in official canon, and he still carries this identity crisis.

Between this selflessness, both in canon and Legends, and his willingness to face any adversary and any challenge, Beilert Valance is becoming one of my favorite Star Wars characters. It is a shame that he was not in the line up of bounty hunters who stood before Darth Vader in Empire Strikes Back, because he certainly deserves it. His role in this story arc was interesting and I look forward to seeing his future exploits.