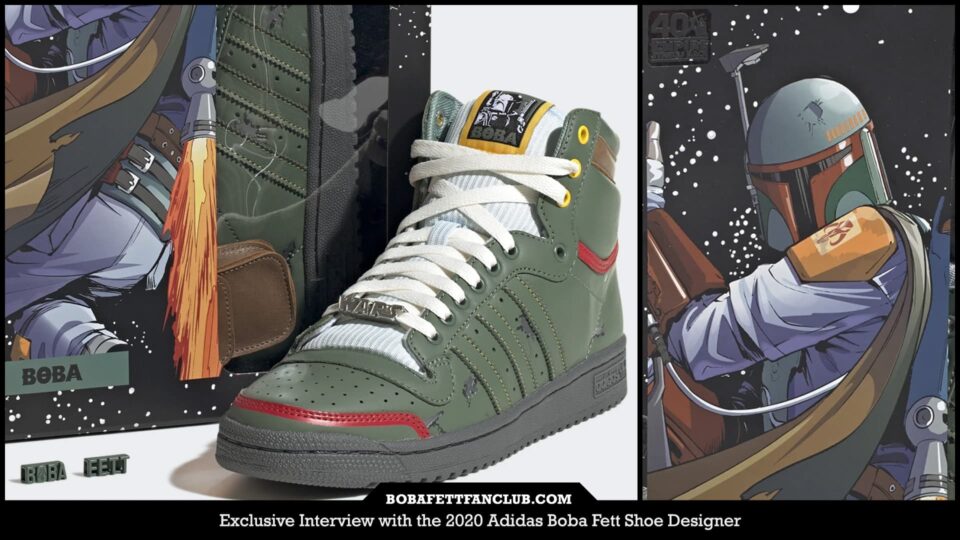 We spoke with Adidas shoe designer Alexander Nguyen about his new Top Ten Hi Star Wars Boba Fett Shoes. The premium footwear is available this Friday, September 25th at 7am Pacific sharp on their US website, as well as other regions in Europe like the UK and Germany, each with local drop times.

We asked Alex about the creative process and the final packaging, plus the unique pouch on one side, which is removable and holds “Boba Fett” lace locks within. These are likely to sell out so get ready when they drop, either for your feet or your “cargo hold.” 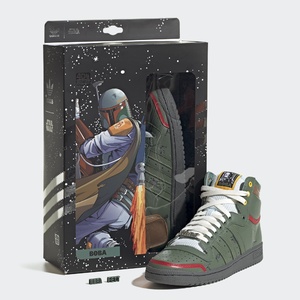 How long have you worked as a designer for Adidas?

I’ve been working for 4 years now as a designer for Adidas.

What was your first thought when it came to this project to design a Boba Fett shoe, the latest after the first one back in 2010?

When I applied for Adidas, my goal was it to work on an Adidas Star Wars collaboration. Who would have thought it would happen after 4 years? That’s why my first thought was craaazy. But I felt a lot of pressure, because I’m a big fan of the old Adidas Originals Star Wars collection, especially the Boba Fett shoes meant a lot to me. Boba is one of my favorites among the bad guys.

What’s the process going from the initial concept to the final finishing and how long does it all take?

I can’t go into detail here, but as with any other design process, I start with concept research, design sketching and then prototyping. 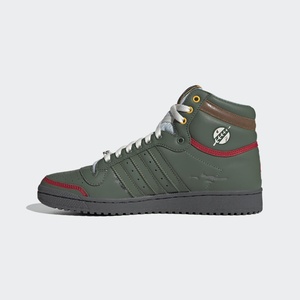 Were there different designs considered before this one was finalized?

We always work into different designs before we — and our collaboration partner — make decisions. That gives us more creativity and flexibility to find the right direction for the final design.

How does the final design get chosen and greenlit for production?

If we are sure that it is the right design, we present it to our partners. If they are OK, we starting the final process to finalize the design.

Does Lucasfilm provide any parameters for the design?

Yes, it’s important also for us to get more insight into this project.

How does the type of shoe get chosen for a project like this?

We align early in the team and with our collaborative partners. We work quite closely together and checking also which shoe fits best into the characters. 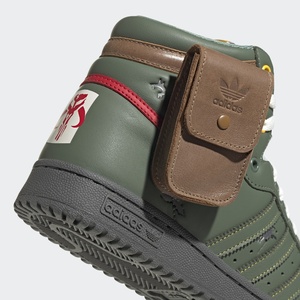 One of the eye-catching things is the outside pouch, which is similar to Boba Fett belt pouches. Isn’t it a complex and expensive detail?

Indeed, it was a quite complex and price intense project. But for us and for this project, it was more important to create a shoe, which connects more to the fans. I felt like it was a cool add-on to bring this removable belt bag into this concept.

Was the pouch a design element from the beginning?

Yes, it was one of the first ideas we implemented.

Inside the pouch is a quote from Boba Fett, from one of the favorite Boba Fett books, “A Practical Man” by Karen Traviss published in 2006: “You can run, but you’ll only die tired.” How was that quote chosen?

We want to have something on the shoes which connects to the characters. Star Wars was and will always be famous for some of its quotes. We felt that the quotes gave the shoe even more personality of the character. The quotes were chosen together with Disney/Lucasfilm.

With the 40th anniversary of “The Empire Strikes Back” this year, was that film an inspiration, despite the non-film quote and “Return of the Jedi” colorway on the box art?

We’re celebrating 40th anniversary “The Empires Strikes Back” and the shoes were of course created for that. The box itself was inspired by our old archive Adidas x Star Wars boxes. 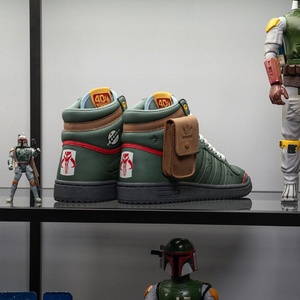 The box art has been used a few times in recent years on other official merchandise. Were you involved in more than just the shoe design but also the packaging choices?

My idea was it to design a box which reminds us on an old Star Wars action figure toy box. We did it in the past, but had to reworked the box to make it more sustainable. That’s why we briefed in an expert team to design and developed these boxes. The result is amazing. Shoutout going the department, which supports us here.